It didn't take long for Walmart Stores' new president and CEO Doug McMillon to realize that the company's sustainability commitment can be a serious competitive advantage, and not just about cost savings.

But when his team asked him to invite top executives from major business partners to an unprecedented meeting of the retailer's supply chain representatives focused on sustainable business issues, he hesitated for fear of seeming like a pest.

Then, RSVP confirmations began pouring in from companies representing more than $100 billion in Walmart sales. That's when McMillon realized that Walmart's interest in reducing its impact while accelerating revenue growth is a priority in C-suites across its entire supply chain.

"When we get this right, it will be something we can talk to our grandkids about," McMillon said, during opening remarks for Walmart's first Sustainable Product Expo in Bentonville, Ark. The conference goal: to expand availability of sustainably sourced alternatives on Walmart shelves around the world, ranging from food to general merchandise to health and wellness products.

One of the most concrete commitments to emerge from the gathering came in the form of pledges by eight of the biggest food companies in the world aimed at placing up to 8 million acres of farmland under sustainable agriculture programs, a move that could eliminate 6 million metric tons of green house gas (GHG) emissions, according to Walmart's estimates. 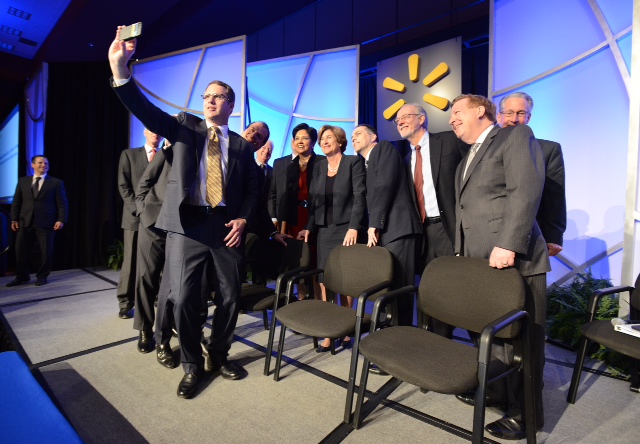 Although the retailer faces its share of social challenges, its investments in renewable energy, leadership in phasing out toxic chemicals and role in creating the increasingly influential Sustainability Index are just three examples of the huge retailer's leadership in green business practices. Suppliers' adoption of the index has tripled in the past three years; the goal for this year is to collect information for up to 2,600 products from 1,500 suppliers, according to information shared during Tuesday's keynote.

That's why McMillon was quick to recognize that the impact of Walmart's supply chain far surpasses what the company can do on its own. "We've all got the pieces to the puzzle, and we have a better shot at creating a system that will create a sustainable planet together," he said.

The need to collaborate was the fundamental inspiration for this week's expo, which featured more than 150 booths and convinced a who's-who list of top executives to make the trip to Arkansas, including the heads of Campbell Soup, Cargill, General Mills, Johnson & Johnson Group Consumer Family Companies (North America), Kellogg, Monsanto, PepsiCo, Procter & Gamble and Unilever North America.

Carter Roberts, president and CEO of the World Wildlife Fund, who served as a co-host of the event along with Walmart vice president of sustainability Manuel Gomez, described the meeting as a "profoundly important" next step to accelerate and scale the adoption of sustainable business practices. "You have the ability to send the right signals," he said.

Considered separately, many attending companies already can hold up credible lists of internally declared and delivered environmental and social initiatives. What's different about the commitments disclosed during the conference is that they are collaborative and aimed at helping companies of all sizes across the Walmart supply chain make steps in the right direction. Here are a few examples of the latest declarations:

Many attending companies along with Walmart, the Walmart Foundation and investment bank Goldman Sachs Group also are collaborating on the new Closed Loop Fund, an initiative that initially will lend up to $100 million to support recycling infrastructure in municipalities and businesses across the United States.

During the opening session, PepsiCo Chairman and CEO Indra Nooyi and P&G Chairman, President and CEO A.G. Lafley described the low rate of recycling — an estimated 9 percent — as an alarming problem that will not be simple to solve without innovations in packaging and far better local support for systemic behavioral changes.

"This could be the single biggest opportunity still ahead of us," Lafley said.

How ‘digital twins’ can model future effects of climate change

Could this be the turning point for green hydrogen?

Here's what to make of the COP26 methane moment