The woman tasked with fusing online and brick-and-mortar sales for one of the world's biggest retailers, Walmart, is moving to the company's sustainability department.

Laura Phillips, a 20-year veteran of the $210 billion multinational, will become the company's senior vice president of sustainability Jan. 1, according to an internal memo provided to GreenBiz. 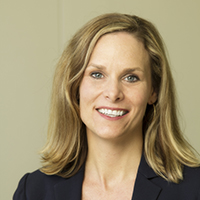 But the interplay between the company's digital efforts and its sustainability department doesn't stop with Phillips.

The shuffling comes as Walmart experiments with different ways to integrate sustainability into its supply chain, sales and marketing efforts — though plenty of critics still question (PDF) how sustainable the company's business model built on mass consumption really is.

While Amazon recently overtook Walmart as the world's largest retailer, the company still rings up about $1 billion in sales every day.

When it comes to the sustainability of day-to-day operations, Walmart has set a goal of attaining 100 percent renewable energy, but, like many large companies, has not committed to a specific time frame.

The retailer has invested in on-site renewable energy generation and entered large power purchase agreements as part of a goal of getting 7 billion kilowatt-hours of clean energy by 2020.

Fortune magazine recently named Walmart No. 4 on a corporate "change the world" list, thanks to the "massive scale" of the company's sustainability efforts.

In Phillips, Walmart is promoting an executive who already has had a hand in several environmental initiatives without formally being part of the sustainability department.

"She was part of the original group of key leaders that our former CEO Lee Scott assembled in 2004 to help develop Walmart’s sustainability strategy, initial goals and principles," McLaughlin wrote in the memo detailing Phillips' new role.

Since then, Phillips has worked with NGOs and academics to "develop solutions to sustainable value chain creation," such as implementing new standards for sustainable seafood and hazardous chemicals.

"She began her Walmart career as a store intern and has grown up in Walmart U.S., working her way up from a buyer for toys, cosmetics and fresh flowers to vice president," McLaughlin wrote. "Laura will help ensure Walmart remains on track to meet our aggressive sustainability goals."