A study of the 30 largest utilities' deployment of renewable energy can serve as a guide to where you should site facilities.

Companies aiming to get more of their electricity from renewables and reduce their carbon footprint might want to look at a new report out today before plotting where to expand their next facility.

According to Benchmarking Clean Energy Deployment 2016 produced by Ceres and Clean Edge, four utilities serving nine states each generated more than 20 percent of their electricity from renewables, or a collective 61.5 million megawatts, by year-end 2014.  On top of that, 2015 was a record year for utility investment in renewables and "utilities plan to install three times as much solar in 2016 as they did in 2015,” the report said. 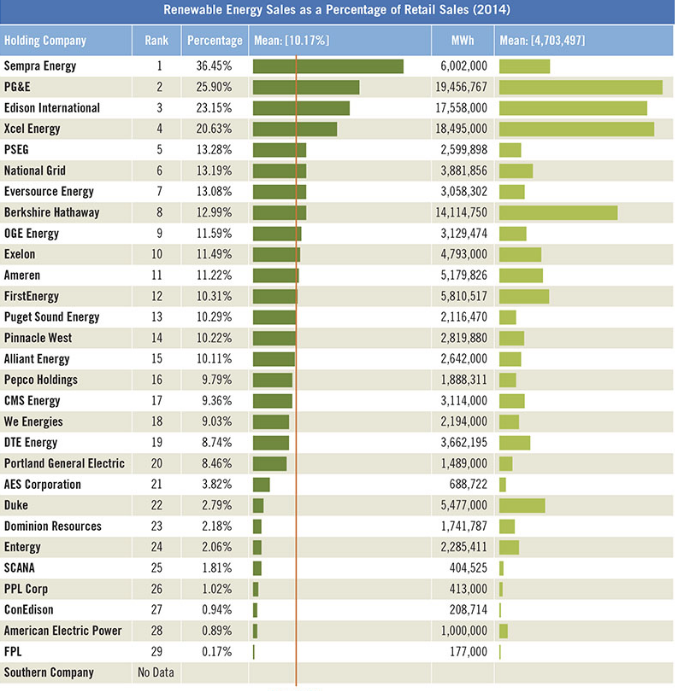 But some geographies are clearly favorable for finding renewable power and others not. The three utilities with the largest percentage of renewables in their generating mix are all California-based Sempra Energy,  PG&E and Edison International. Their investments are driven by state policy which calls for California receiving 50 percent of its electricity from renewable sources by 2030. PG&E had 19.4 million megawatts of renewable power installed by year-end 2014, more than any other US utility.

Xcel Energy, which serves the prairie region of Minnesota, North and South Dakota, Michigan and Wisconsin as well as Colorado, Texas and New Mexico, is aggressively pursuing renewable generation for strategic purposes.

"Clean Energy is part of our corporate strategy," said Frank Prager, vice president of policy & federal affairs at Xcel Energy, in an interview with GreenBiz, and it's driven by customer interest and cost, he said, while favorable sate policies in its territory and "great wind resources" of miles and miles of favorable strong winds both help..

But in Florida, by comparison, Florida Power & Light has almost no renewable power in its energy portfolio, according to the Benchmarking report, while American Electric Power, which serves 11 states in the Midwest and South, PPL Corp, which serves Kentucky, Pennsylvania, Tennessee and part of Virginia, and SCANA, which serves South Carolina, generated less than 2 percent of their energy from renewables, as of year-end 2014, the report indicated.

Energy efficiency strategies have reduced costs for electricity users and helped cut their carbon emissions. In New England, Eversource Energy has doubled on its energy efficiency offerings as a way for customers to reduce energy use and thus emissions. Its enery efficiency savings accounted for 1.87 percent of sales — a record for any utility — in 2014, according to the Ceres report. 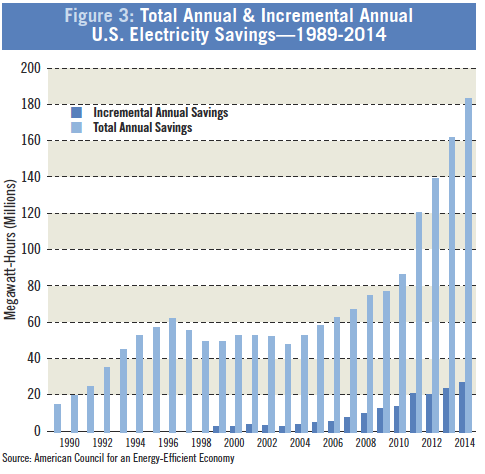 Ceres is a non-profit that galvanizes investors around sustainability and Clean Edge is a research firm.They used renewable portfolio standards filings with state regulators and 10 K reports filed with the federal Securities and Exchange Commission for individual utility data.

At a time when increasing numbers of corporations are interested in using renewable energy — at least 65 major companies have committed to transition to 100 renewable energy, based on membership of the RE 100 — those utilities sticking to fossil fuels are beginning to stand out. And they could lose out. 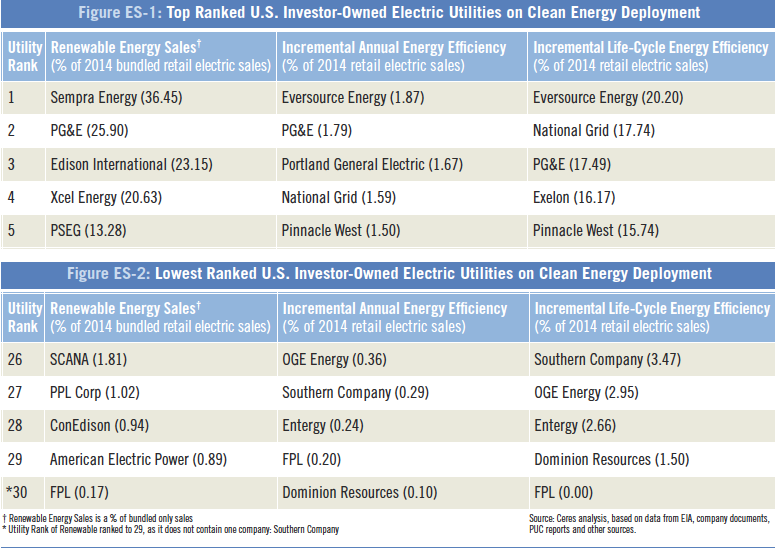 Sure, utilities’ renewable investments are often driven by state policy and what regulators require in their renewable portfolio standards. That, for instance, seems to be why the top three ranking utilities in percent of renewable generation are from California, where the state legislature has codified a goal that 50 percent of the state's electricity should come from renewable sources by 2030. State policy also influences Con Edison’s score, the report noted, because regulation in New York, which Con Edison serves, calls for third parties to deploy renewables rather than utilities.

Corporate and consumer demand for clean energy and continually improving economics are driving utility clean energy procurement above and beyond policy requirements.

But state policy isn’t the only driver, the report stressed. And increasingly, corporate customers drive utilities to make these renewable investment decisions. "Corporate and consumer demand for clean energy and continually improving economics are driving utility clean energy procurement above and beyond policy requirements," the report found.

Xcel Energy, which deploys the second largest amount of renewable energy of any U.S. utility at 18.5 million megawatts at year-end 2014 and the fourth most by percentage, has chosen to invest in renewables beyond what its states' renewable portfolio standards require, executives say.

"Our customers our very interested in renewable energy," Vice President Prager told GreenBiz. And from what the company has observed, its aggressive deployment has "absolutely played into" large corporations decisions about siting facilities in its territories, he said.

As an example he cited Panasonic, which is opening an Enterprise Solutions business in Colorado that will be powered by 1.3 megawatts of solar generation plus battery storage that Xcel has agreed to provide. 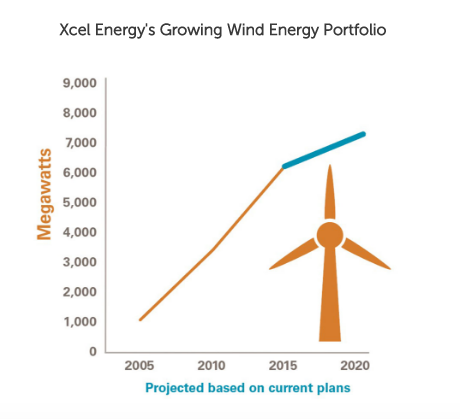 Utilities at peril of losing business without renewables

As GreenBiz has chronicled, when utilities don’t provide renewable energy, many large corporations such as Apple, Google, Walmart, Ikea, Kaiser Permanente and others that have 100 percent renewable energy goals have broken away from the utility services and entered power purchase agreements with solar farms and wind producers to buy power direct.

Evidence in the Ceres/Clean Edge report is that utilities finally get the costs of lost opportunity by not deploying renewables.

Indeed, utilities are now the biggest customers of solar and wind installations: Utilities account for 60 percent of all installed solar capacity in the U.S. and "virtually all of the wind, geothermal capacity," the report said. And this has been accelerating in recent years, the report documents.

"Utilities plan to install three times as much solar in 2016 as they did in 2015," Ceres and Clean Edge said. 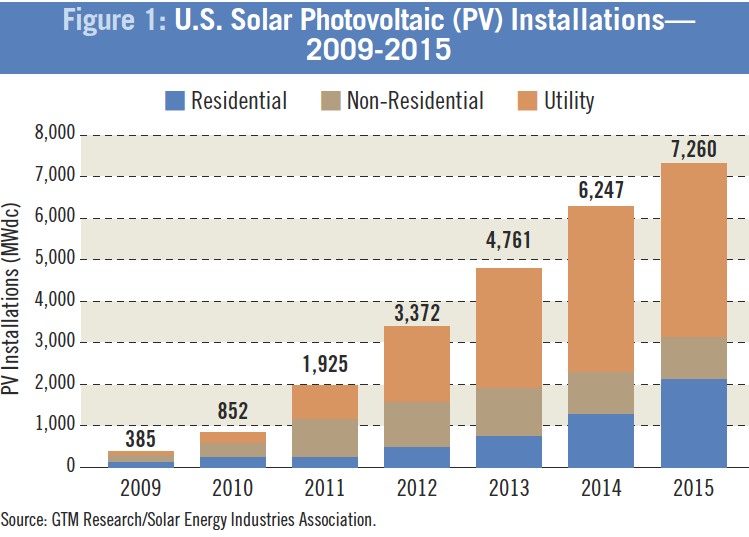