LOS ANGELES — Can a green building make your company smarter? That's what new research suggests, underscoring the ROI for green certifications — not just for optimizing the usual factors such as energy and water use, but for elevating workforce productivity.

It’s clear at Greenbuild 2016 this week that the health and wellness of workers indoors is becoming a high-level concern. No longer is human comfort something a corporation might consider from the kindness of its profit-seeking heart. Instead, evidence of a competitive advantage for fostering well-being speaks the language of the C-suite.

The early results of a new study dubbed COGFX are being buzzed about for finding 26 percent higher scores on cognitive tests for workers in LEED-certified buildings. 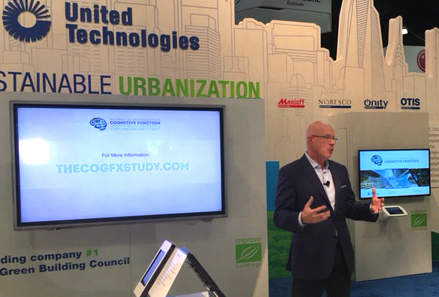 Green-building benefits extended beyond the office and waking hours, according to the researchers at Harvard University's T.H. Chan School of Public Health and SUNY Upstate Medical University. They cited a 6.4 percent uptick in sleep quality scores with 25 percent higher cognitive results the next day among occupants of green-certified workplaces.

"Buildings can now become human resource tools," said John Mandyck, sustainability chief at United Technologies Corporation, which backed the research. "It can be a competitive asset for companies, for building owners to say, I’m going to invest in my building not only from an environmental standpoint, but so my people can be the most productive and healthiest they can be, and that will lead to bottom-line results." 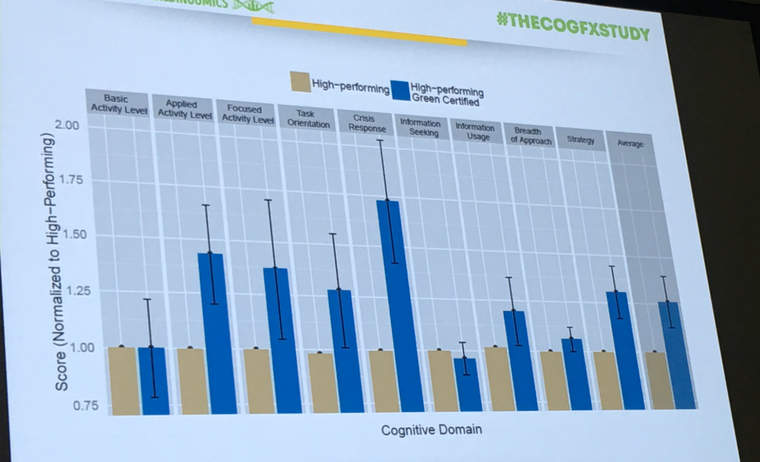 Researchers extended the work of a lab-based study released last year by giving cognitive tests and surveys to 109 people in 10 real-world, "high-performing" buildings across five cities over the course of a week.

Among those buildings is the workplace of Dave Pogue, global director of corporate responsibility at CBRE in San Jose, California. "I’m really happy they’re smarter being in the building we’re in," he said.

Pogue added that the findings validate a 2008 survey he worked on, which concluded green buildings "make dollars and sense" and can enhance productivity. Yet Pogue said those results were met with scorn when he presented them at Greenbuild 2009. "Intuitively we all know that is true but we could not prove it scientifically," Pogue said, yet the double-blind, peer-reviewed COGFX study will be "foundational and move the industry."

There's potentially a lot of movement ahead. In the past 20 years, roughly half of commercial construction today has become green.

"That’s chasing 1 percent of the cost," said Mandyck of UTC. "Think of how much farther and faster this movement can go if we chase 90 percent of the cost, which is the salaries and benefits of the people. To do that, you need data like this. The ROI can’t be on energy alone. It has to be on productivity. We’re starting to get data and research and tools where we can now evaluate that productivity and monetize that productivity for the ROI calculations."

The first round of COGFX research looked largely at ventilation, including levels of CO2 and volatile chemicals.

"Study one found is all you have to do is breathe," Mandyck said.

This time COGFX researchers sought to explore what they dubbed "buildingomics," the genomics or bigger picture of what’s happening indoors, not just as individual factors such as lighting, temperature or better air quality, but how all of that comes together to benefit productivity and wellness. 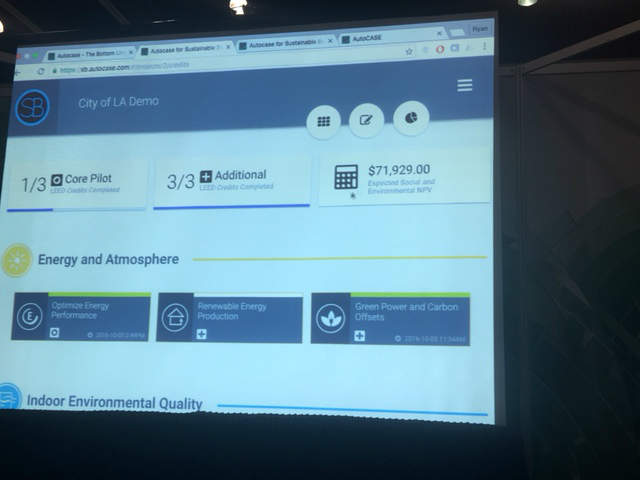 GreenBiz
<p>A demo of Autocase software shows a real-time ticker for the ROI of tweaking various factors in a building, in dollars and cents.</p>

The vendors of products such as living green walls and low-toxic, soy-based insulation at Greenbuild said they could use this kind of research as a selling point. Among the exhibitors on the show floor is startup Biome, which makes hydroponic living wall systems (and won a GreenBiz VERGE 16 Accelerate pitch competition last month).

What are the key lessons corporations should take away now? Researcher Piers MacNaughton, project manager of Harvard's Healthy Buildings Program, urged companies to "go beyond the code. Start to characterize health performance indicators in real time."

I’m going to invest in my building ... so my people can be the most productive and healthiest they can be, and that will lead to bottom-line results.

To that end, a new web-based tool called Autocase for Sustainable Buildings promises to simplify decision-making for architects and other leaders. Billed as "measuring the triple bottom line (financial, social, and environmental) impacts of design alternatives," it takes into account health, worker absenteeism rates and productivity among myriad other factors. Autocase features a real-time cost-benefit analysis for factors such as carbon emissions, air quality, energy and water efficiency. A TurboTax-like display adjusts expected LEED credits and net positive value to reflect your design choices.

Autodesk already provides design tools to architects, engineers and contractors, said Emma Stewart, head of sustainability solutions at Autodesk. “But ultimately the folks calling the shots are the project sponsors and ultimate owners and occupiers. You have to be talking in dollars and sense, not in square feet or cubic feet of water."

Autocase brings in publicly available data with social and environmental valuation research and “picks only the best of those studies to apply so they are bulletproof and defensible in the court of public opinion,” she added.

Autocase, built by Impact Infrastructure and released in partnership with Autodesk, is available as a free beta version until the end of 2016, after which it will cost $175 per month.

Other signs that the human experience is becoming a bigger deal in the green building world: There’s a new health and wellness section in the Greenbuild Expo hall. A number of workshops explored the theme. Exhibition floor sessions with a big turnout included "The business case for the WELL building standard."

And Paul Scialla, founder of the International Well Building Institute behind WELL, touted health and wellness before a large crowd, explaining the goal "to merge medical science with building science."

Meanwhile, Rick Fedrizzi, CEO of the U.S. Green Building Council, announced that he’ll step up as the next chairman and CEO of the IWBI in November. He was a driving force behind the 2013 launch of the USGBC Building Health Initiative, whose founding partners include Adobe, Genentech, Google, Kaiser Permanente, Webcor and XL Construction.

Water Wisdom for Real Estate and the Built Environment

To build the future, change these 'stone wheels on a Tesla'