We can achieve an energy reset in Puerto Rico

Two of the largest hurricanes in recorded history hit Puerto Rico, the U.S. Virgin Islands and other Caribbean islands within 10 days of each other.

The cause is undeniable. The devastation almost indescribable, and the opportunity to rebuild a green, renewable, more resilient electric grid has never been called for more urgently.

Migrating from fossil fuels to renewable energy sources is a big part of the solution.

And rebuilding Puerto Rico’s devastated electric grid is the doorway to how we get there.

Hang with me here.

The humanitarian crisis unfolding among our American neighbors in Puerto Rico will require a higher level of engagement and investment than FEMA is currently putting forth. Our fellow citizens there are facing critical safety, survival and security concerns throughout the island.

Food, fuel, water and medical care are urgently needed and it’s not getting there fast enough. Clearly, the lagging relief effort is our most immediate concern.

But how — as a compassionate and thinking people — do we prevent this from being an annual humanitarian crisis?

Is it enough to rebuild the same old grid, or is something more required?

To get the right answers, we must ask the right questions. And those questions have to do with how we rebuild.

Americans know a thing or two about resilience.

This means changing the way we feed our people, fuel our economies and heal our planet as we face the realities of climate change.

Resiliency means more than just picking yourself and your neighbor up off the mat. It means adapting and changing in light of new realities. We rebuilt our cities differently — stronger, better, more resilient — after the great fires that destroyed Chicago and Baltimore in the early 1900s. We learned to farm and irrigate our land differently after the dust bowls that devastated America’s heartland in the late 1920s.

Today, we must learn from the mega-hurricane disasters brought about by our global warming.

This means changing the way we feed our people, fuel our economies and heal our planet as we face the realities of climate change. It means rebuilding an electric grid in Puerto Rico that will be, at once, more renewable and more resilient.

What if we were to rebuild Puerto Rico’s electric grid to make it both 100 percent renewable, and far more resilient to the mega-hurricanes of our foreseeable future? And what if that new 21st-century power system was also less expensive to operate and provided lower costs for customers?

But until the hurricanes wiped out our neighbors in Puerto Rico, all we read about was Puerto Rico’s debt. Less publicized is the fact that $8 billion of Puerto Rico’s $74 billion of indebtedness actually derives from PREPA — the government-run utility.

Denmark, Costa Rica and Ecuador have demonstrated the capacity to go to 100-percent renewable while making their countries more secure and prosperous at the same time.

The truth is America’s largest territory is electrified by a dirty, expensive, rickety and terribly inefficient power system. A power system whose primary fuel for its 40-year-old fleet of generators is heavy fuel oil and diesel — the most expensive and polluting petroleum products on the planet. A power system whose antiquated grid wastes 14 percent of the electricity it produces while burning the dirtiest of fossil fuels.

And every imported barrel that the people of Puerto Rico buy are dollars that leave the island, that no longer circulate, that are no longer available to lift Puerto Rico’s economy.

As Chris Burgess, director of projects for Rocky Mountain Institute’s Islands Energy Program, explains: "The new age utility is no longer the sole monopoly producer of energy but rather the facilitator of a dynamic grid — a grid where we all participate. We all consume. Now — thanks to declining solar and wind costs — we can all produce."

A full transition to renewable energy and microgrid resiliency in Puerto Rico will produce thousands of new jobs in engineering, construction, maintenance and operations.

Other countries such as Denmark, Costa Rica and Ecuador have demonstrated the capacity to go to 100-percent renewable while making their countries more secure and prosperous at the same time. Other islands such as Ta’u in American Samoa, Bonaire in the Dutch Antilles and Kaua’i in the Hawaiian chain have shown the capacity to thrive on renewables. So too, can Puerto Rico.

It is time to call into service the American innovation and technology that already exists.

NGOs such as the Rocky Mountain Institute have been actively partnering with island states such as Saint Lucia, Saint Vincent and Montserrat to transition from expensive and volatile imported fuel oil to domestic renewable energy with accelerated success.

The island state of Hawaii has declared a goal of 100 percent renewable energy by 2045. And the economics already are accelerating the speed of progress to reach that goal. The Hawaiian island of Kaua’i has transformed its energy mix from 90 percent oil fired to 40 percent renewable (with over 90 percent solar and battery during the mid-day peak) in just a few short years.

The bottom line is this.

What has been destroyed needs to be rebuilt. Why not build it in a way that allows Puerto Rico to generate its own electricity in ways that are more resilient to next year’s hurricanes, better for its own economy and less expense for its consumers and businesses?

There are some things beyond our control, but regulatory policies are not. Here are a few that need to be changed if we are to create a safer, more reliable and more prosperous energy future in Puerto Rico.

These are all human constructs, human choices and human policy choices.

The time is right to make Puerto Rico a proof positive of what can be achieved if we embrace the opportunity of climate change to create jobs and improve the well-being and prosperity of our people.

The engineering know-how is here. The urgency of this new normal weather threat is here. Puerto Rico’s debt crisis is here and it has its roots in overpriced, fossil-fueled electricity.

The time is right to make Puerto Rico a proof positive of what can be achieved if we embrace the opportunity of climate change to create jobs and improve the well-being and prosperity of our people.

We human beings make sense of things from stories close to home. The scale can confound us. When the scale is too large, it can short-circuit the imagination. It can throw the art of the possible for a loop. But what has happened to Puerto Rico also could be a turning point. A proof point. An opportunity to imagine and rebuild at a scale that all can see and understand.

Yes, this is about alleviating the suffering of our American neighbors in Puerto Rico right now.

But it also about how the United States of America protects our people in the future from the very real present danger posed by climate change.

We have the power to change and adapt.

As Americans, we have proven time and again that adaptation and change are our great strength.

It is time to call into service the American innovation and technology that already exists.

It is time to call forward the goodness within us in rebuilding Puerto Rico.

We might just learn something by doing what is right and needed.

We might just remember we are capable of accomplishing great things. 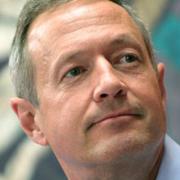 See all by Martin O'Malley