Fifteen years ago, more than 190 countries, with input from many stakeholders, established a set of eight Millennium Development Goals, or MDGs, to guide global development work. Ranging from reducing by half the number of people living in extreme poverty to improving development governance, the goals represented an attempt by governments to set a limited number of priorities. In reality, they showed an inability to deliver on more ambitious action plans agreed in the 1990s at a number of United Nations conferences and summits. Some MDGs have been achieved, in part due to the financial crisis in 2008.

From Sept. 25 through 27, heads of state from around the world will meet at the U.N. in New York to agree on a new transformational agenda — the Sustainable Development Goals. The SDGs differ from the MDGs in two very important ways: First, the MDGs dealt with just development, while the SDGs deal with sustainable development. Second, the MDGs dealt with only developing countries and the SDGs deal with all countries.

The origins of the SDGs

The original idea to have SDGs replace the MDGs came from the governments of Colombia and Guatemala in July 2011. It became clear in the preparations for the 2012 U.N. global development meeting Rio+20 that the world would face complex problems in the coming decades.

By 2030 there will be roughly 1 billion additional people living on the planet, and close to 60 percent of the world’s population will live in urban areas. At the same time, the economic growth of China, India and other developing countries, along with climate change, will create additional stress. As a result, agriculture will have to produce 30 to 40 percent more food, primary energy demand will see a growth of 40 to 50 percent and water demand is expected to exceed global availability by 40 percent.

Will the SDGs succeed? That depends on four things. Coupled to this was the 2009 planetary boundaries research by Johan Rockström from the Stockholm Resilience Centre and Will Steffen from the Australian National University. It identified nine planetary boundaries we should not exceed. Their research suggested we were exceeding those boundaries or in danger of doing so in three areas (climate change, biodiversity loss and biogeochemical).

It took a three-year campaign by those advocating for the SDGs to persuade the world community that this was the right direction to go. Development ministries and many development NGOs initially opposed including sustainability in the development agenda. They had been looking for an “MDG+” agenda rather than a sustainable development agenda.

The path to success

The SDGs will address the challenges the world faces through a set of 17 goals and targets that fall into six broad themes:

The MDGs attempted to halve those in poverty, but at last governments are committing to end poverty in all its forms everywhere by 2030. They are also starting to address the great inequality that has arisen over the past 20 years. And they are committing to promote sustained, inclusive and sustainable economic growth, full and productive employment and decent work for all.

Will the SDGs succeed? That depends on four things.

First, those working to achieve them must make a commitment to report and share good experiences.

Second, developed nations must be willing to transfer green technologies and knowledge to developing countries.

Third, governments meeting in Addis Ababa in July for the Financing for Development Conference must establish a solid financial framework to support the implementation of the goals by governments. This must include promoting green taxes and bonds and requiring large companies, in order to be listed on stock exchanges, to disclose information on policies, risks and results for environmental, social, employee-related, human rights, anti-corruption and bribery issues in their annual reports.

The path to a just, fair, equitable and sustainable world is within our grasp, but only if we work together — and quickly — to make it a reality. Finally, the U.N. climate change talks slated for Paris in November and December must give us a good road map on climate — a critical underpinning to all of the goals and targets.

By the end of 2015, governments will have agreed upon the direction for the SDGs. The job for the rest of us is to hold them accountable to what they have agreed and recognize that we all play our role in delivering this agenda.

The path to a just, fair, equitable and sustainable world is within our grasp, but only if we work together — and work quickly — to make it a reality. Let the words of Martin Luther King Jr. not be said of us:

“Over the bleached bones and jumbled residues of numerous civilizations are written the pathetic words, ‘Too late.’” 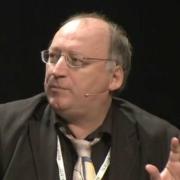 See all by Felix Dodds