We Mean Business: The Paris Accord is a $13 trillion opportunity

Implementing the Paris Agreement will unlock at least $13.5 trillion of economic activity globally, according to an analysis by We Mean Business.

As the commitments made by 196 countries at COP21 in Paris are carried out, the investments in renewable electricity, energy efficiency and other low carbon power that countries have promised add up to that amount.

“And that is to fulfill energy commitments alone,” said Edward Cameron, head of policy at We Mean Business on a telephone call about the What it Means for Business analysis of the Paris deal. “For instance China committed to grow renewables to 20 percent of their energy mix in 15 years. To put that in perspective, 20 percent of China’s energy is equivalent to all of the US energy sector.” India committed to generate 40 percent of its electricity from non-fossil fuel sources by 2030.

Signaling that business is eager to pursue the implied investments, 110 U.S. companies Wednesday called for “swift implementation of the Clean Power Plan,” the main piece of the U.S. commitment to the Paris Agreement.

The Clean Power Plan, an Environmental Protection Agency ruling requiring states to reduce their utility sectors' emissions an average 32 percent, is currently on hold as the Supreme Court ruled to delay enforcement until challenges filed in District Court could be litigated.

Companies from a range of industries signed on to the statement, including tech's HP, Salesforce and Autodesk, retailers Ikea and Gap, electric utility Pacific Gas & Electric, big manufacturers Dupont and Colgate-Palmolive, which was organized by Ceres and the World Wildlife Fund.

The 110 companies said that implementation is needed “so that we may meet or exceed our national commitment,” and support investments in low carbon initiatives, “giving financial decision makers clarity” on the policy road ahead.

On Friday, which is Earth Day, representatives from 150 governments, including 40 heads of state, are set to sign the Paris Agreement at a United Nations ceremony in New York City.

We Mean Business, a coalition of 374 companies with a combined $7.8 trillion in revenue and 183 investors who collectively manage $20.7 trillion in assets, said it chose today to release its report about the economic opportunity to to support the governments committing to action, particularly the US.

The coalition said that member companies that have invested in clean energy and low carbon initatives are seeing an average 27 percent return on those investments.  They are also experiencing “first mover advantages in low-carbon markets, more resilient operations and supply chains and a stronger reputation among employees, consumers and other stakeholders.”

Ikea Chief Sustainability Officer Steve Howard said that the global furniture retailer has seen a robust ROI on its low-carbon products, particularly LED lighting, which is now the only kind of lighting it sells.

Cameron, Howard and Ceres president Mindy Lubber spoke to reporters on a press call this morning, along with Anirban Ghosh, chief sustainability officer of Mahindra & Mahindra, one of India’s largest companies, and Michael Terrell, senior policy counsel for energy and sustainability at Google. 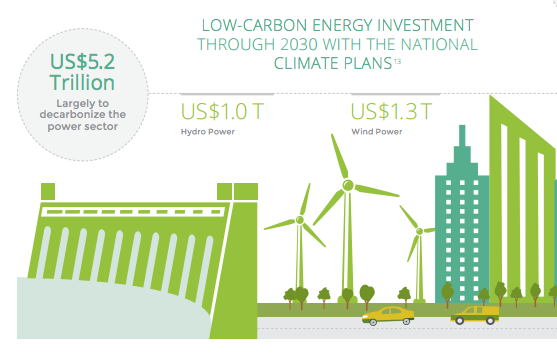 Even as We Mean Business talks about a $13.5 trillion gain in economic activity from the Paris Agreement, another group, the conservative Heritage Foundation think tank, stated that the Paris agreement will cost $2.5 trillion in lost global GDP.  That is based on an assumption that conventional fossil-fuel-based energy is cheaper than renewable energy.

Yet Terrell said Google’s investments in 2 gigawatts of renewable energy were made for cost advantage reasons, as well as to transition the company to clean energy. Google figures it is the world's largest private  sector investor in renewable energy.

Terrell as well as Jim Miller, Google’s vice president of global operations, said that in every location where Google has invested in solar or wind purchase power agreements or direct installations, it has been a better financial deal than relying on electricity from the local utility with fossil-fuel generation.

In every location where Google has invested in solar or wind purchase power agreements or direct installations, it has been a better financial deal than relying on electricity from the local utility and fossil fuel generation.

Executives on the call described an "unprecendented" shift in both attitude and action among the world's policy and business players because of Paris. Howard said that while action to address climate change used to be described as "a burden and cost to be shared," now it is being described as a huge opportunity for innovation, investment and job growth.

Yet Lubber of Ceres said business and nations should stay aware that the clock is ticking "in [the] face of this clear and existential threat that faces every being on this planet," and that it is time for "boots on the ground" implementation.

Cameron of We Mean Business said he has heard from major insurers that the global temperature trajectory would create "an uninsurable world" with a great deal of property damage and agricultural disruption. That's based on a rate scientists have tracked of temperatures rising by 4.8 degrees Celsius by the year 2100 if nothing is done to prevent it. Food will not grow at that temperature and people will starve, Cameron added. The stakes are clear.

Commitments in the Paris Agreement, assuming they are carried out, are projected to keep average global temperatures below 2.7 degrees Celsius by 2100.  The nations agreed to attempt to strengthen their commitments every five years to aim for a limit of 1.5 degree Celsius in global temperature rises by the century's end.