<p>As the second half of the UN climate summit gets underway, there's an elevated sense of urgency among the delegates. But until the dust settles, we won't be able to tell just how much progress -- and success -- they have to show for it.</p>

As COP17 enters week two, there is a palpable shift in atmosphere. Delegates from governments, industry, and NGOs set out last week with clear mission to secure specific gains. Over the course of the week, negotiations got entangled in challenges. Now, with just days left, respective parties worry that they will end up short.

Veterans of COP maintain that the Talks follow a similar pattern every year. At the outset, there is great hope, enthusiasm and a prevailing one-for-all spirit. By week two, challenges emerge -- as might be expected with such a large and diverse set of stakeholders. The waters get rough and anxiety rises. At the close of the Talks, many lofty expectations, no matter how well justified, go unmet. There is a deflating sense of failure.

Yet on the margins, there is often discernable progress. Last year, COP yielded the Cancun agreements, REDD+ and a myriad of partnership, product and industry announcements. Often, it takes time for the dust to settle before the positive outcomes become evident.

"It's typical of the way things evolve in the U.N.," says Jeff Hayward, Rainforest Alliance and COP veteran. "It's an iterative process."

As a COP rookie, it's hard to tell whether the rising anxiety tracks historic patterns, or whether it is more than usual. Throughout the day on the bustling Durban campus, there was a pervading sense of urgency. In the context of recent headlines about the blistering pace of growth for the world's greenhouse gas emissions and recent IPCC warnings on extreme weather events -- the urgency takes greater hold.

This morning, at Global Business Day, Jean-Guy Carrier, Secretary of the International Chamber of Commerce, an association of hundreds of thousands of small and mid sized businesses across 120 countries, said directly, "Businesses from all over have different things to say. But they very much agree on one thing: there is true urgency on reaching agreement."

Jim Leape, Director General of World Wildlife Fund, had a more emphatic message: "We're not done here. This process is too important given its inclusion of the most vulnerable countries to let the actions of a few governments impede progress. The fact that we will ultimately need a fair, ambitious and binding agreement to tackle the threat of climate change has and will not change." 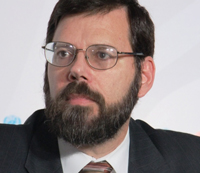 Ironically, those closest to the negotiations appear less agitated. John Pershing, the U.S. Deputy Envoy, is professorial in his glasses, beard and resonant voice. He is also arrestingly articulate.

In answer to questions, he starts with a signature "Thank you very much." He then swiftly delivers an authoritative response that seems complete at first blush, but upon further consideration, quite indefinite. As an American, he's the ace debate team captain you want on your team. As a climate change advocate, you don't know what to think. You're not quite clear on Pershing's point-of-view.

As an international negotiator, Pershing's role requires that he maintain a diplomatic, measured posture. Yet the communication vagaries feed anxiety.

COP veterans suggest the talks can intensify in the final hours or decelerate to an anticlimactic hum. Given today's agitation, it sure feels like COP17 is heating up.