Weekend read: Is this the beginning of the low-carbon economy?

Weekend read: Is this the beginning of the low-carbon economy?

The most important thing to do is to try to retain a sense of perspective. News that the International Energy Agency is prepared to declare global carbon emissions stopped growing last year is huge, gargantuan, brobdingnagian in its historical significance.

This could be it. This could be the point at which global greenhouse gas emissions peak and we begin the long voyage toward a modern decarbonized economy compatible with the continuation of a climate conducive to human civilization.

We could be living through an era historians one day will herald as the dawning of an age of environmental and economic enlightenment. Like I say, it is important to retain some perspective; optimism can run away from you.

The reality is that the Financial Times' report Friday suggesting global carbon emissions failed to climb last year even as the economy grew 3 percent comes with the usual bag of caveats.

First, official emissions figures are notoriously difficult to compile, as fugitive emissions silently seep into the atmosphere unheralded — and certain industries in some countries routinely massage the figures they report. We will have to wait for accurate measures of atmospheric greenhouse gas emissions concentrations to get confirmation that carbon emissions really have stalled. 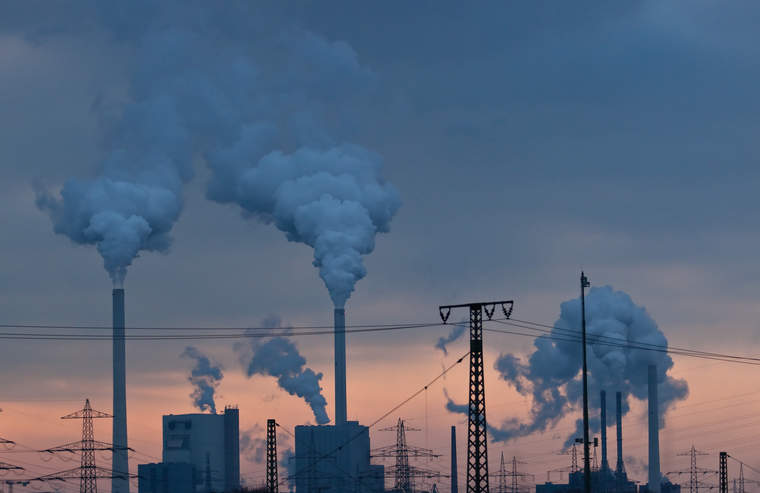 Have we reached a tipping point for carbon emissions?

Secondly, the halt in emissions growth in no way will bring climate risks down to acceptable levels.

Celebrating an end to increasing emissions is akin to a man who weighs 400 pounds popping open the champagne because he's stopped gaining weight. It is not so much a step in the right direction as it is an end to stepping in the wrong direction.

What we need is to cut emissions at breakneck pace for several decades. The fact today's news should be on front pages all around the world but barely has caught the attention of the mainstream media makes delivering this rapid transformation of the global economy even harder to achieve.

Thirdly, a yearlong hiatus in the near-uninterrupted upwards trajectory of global emissions does not necessarily mean they will peak.

Yes, the manner in which emissions have stalled this time without the help of a crippling economic crash is hugely encouraging, but it does not necessarily follow that this year we will be able to grow 3 percent more and see emissions fall at the same time.

The oil price crash could revive the fortunes of gas-guzzling cars and carbon intensive business models. The slowdown in China's emissions could be offset by new coal capacity in India. Elections could see several leading economies water down their decarbonization policies.

All discussions of global emissions trends should be accompanied by the reminder that a Republican White House and Congress in the U.S. would make tearing up progress on clean energy one of its top priorities.

Fourth, climate change is not the only potentially catastrophic environmental risk the global economy faces. No similarly encouraging figures in the pipeline reveal that we're making surprisingly good progress tackling biodiversity loss or resource profligacy. The reasons for this absence is because we're making hardly any progress at all.

Worst of all, evidence emissions have peaked could be seized upon by world leaders gathering in Paris in December to declare the current framework of flawed and inconsistent policies is working just fine, that the world has decoupled emissions and economic growth, and all we need to do is continue as we are in pursuit of the apparently sunlit uplands of a world where warming is kept within 2 degrees Celsius.

And yet, while remaining fully aware of the need for caution, it is hard not be excited by the latest data.

If the imminent IEA report were an outlier, it would be easier to dismiss. But it fits into a pattern of increasingly encouraging emissions data.

A series of official Chinese reports have shown coal use fell last year, while U.S. emissions have been dropping for a while as a result of the shale gas revolution and a drastic increase in renewable energy capacity. In addition, the EU has been on track to meet its goal of cutting emissions 20 percent by 2020 for some time.

Taking the U.K. as just one example, a remarkable recent analysis from Carbon Brief detailed how emissions fell 8 percent last year. Yes, a mild winter played a role, but so did a long-running reduction in energy demand and continued increases in renewable energy capacity.

Logic dictated it was only a matter of time before the under-reported, yet globally transformational, emergence of clean technologies and effective climate change policies began to have a discernible impact. How could it not?

Every wind turbine, every solar panel, every shuttered coal plant leads to the generation of energy at a lower carbon intensity than that which has gone before. Every electric car or LED light bulb replaces dirty and inefficient technologies that pushed global emissions ever upwards.

For decades developing economies have emulated or leapfrogged the business models and technology trends of OECD nations. It stands to reason that the same would happen with clean technology.

Of course, the risk remains that this encouraging development could lead to a degree of complacency among business and political leaders.

But I'd argue it is more likely to give them the massive confidence boost they need to pursue ever more ambitious decarbonization efforts.

If the data is accurate, it shows decoupling economic and emissions growth is possible at the global level, and all without compromising living standards or completely tearing up current economic, political and legislative systems.

The growing numbers of global businesses that are boldly pursuing zero emission, zero waste or 100 percent renewables policies — and demonstrating that such an approach is commercially viable — will feel both vindicated and encouraged that they can exploit their first mover advantage.

Others will look on and start to realize that decarbonization trends are something they have to adapt to whether they like it or not.

A fossil fuel industry already struggling to offer a coherent and credible response to the divestment trend and warnings of stranded assets will be forced to recognize that the long-term risks faced by its business-as-usual strategy are more acute than ever.

Keeping a sense of perspective is critical. There is no guarantee this is the point at which carbon emissions peak, and even if it is there are no guarantees we can deliver the vertiginously steep reduction in global emissions that is required. The challenge remains daunting in its enormity.

The known and unknown climate risks that we all face still threaten potentially disastrous consequences. Much bolder policy reforms and as yet uninvented clean technologies are still needed to deliver the scale of emissions reductions that are needed.

But if this is the emissions turning point, it opens up a whole world of possibilities for the green economy.

Throughout history, incumbent industries have a tendency to die very slowly and then really fast. Solar power, electric cars, energy efficient technologies, perhaps even new nuclear and carbon capture and storage, all have the potential to replace the polluting unabated fossil fuel industries that pushed global emissions upwards to this still potentially catastrophic point.

To build a new future, you first have to envision it. Evidence that global emissions growth has stalled gives the world permission to envision a greener, healthier, decarbonized future.

Sometimes — and this is one of those times — you also need a perspective that allows for the possibility of such a future.

This article originally was published by BusinessGreen.

The global economy is growing, but carbon emissions aren't

It's time to double down on decarbonization efforts