Welcome to the water tech boom: 3 ways to do more with less

Welcome to the water tech boom: 3 ways to do more with less

An alarming map of the state that provides two-thirds of the fruit and nearly half of the vegetables consumed by Americans drives home just how severe California's water situation has become. A deep red gash representing "exceptional drought" stretches across the entire middle section of the state and bleeds both north and south.

Fully 47 percent of the state is in exceptional or extreme drought, including the entire agricultural Central Valley, according to the map’s data plotters at the Pacific Institute, a water research organization.

You don’t have to tell that to the farmers who fallowed 400,000 acres last year, which translated to no work for some 1,700 farm laborers. Even more land is estimated to be fallowed this year as the drought entered its fourth and most severe year.

Some farmers are having to pay dearly for water. Others simply don’t have it.

Like everyone else — including residents, golf course operators, hospitals and manufacturers — farmers assumed water always would flow from somewhere.

In dry years when rain was scant, farmers could turn to allocations from the massive federal Central Valley Project, a complex systems of aqueducts, reservoirs and pipes that transport water from the San Joaquin and Sacramento rivers basins in the north to the southern farms and cities. The State Water Project also has shuttled water around to both cities and farms. But this year, neither project is delivering water.

Groundwater, too, seemed like an easy answer. Farmers have been pumping out water from under their fields for years. But California groundwater is fast depleting to dangerous lows; robbing water from future generations. For the first time, the state is moving to regulate groundwater use.

Furthermore, Wednesday the U.S. EPA issued amendments to the Clean Water Act that would protect wetlands and streams. This might influence farmers who use wetlands for irrigation.

Water is a now a cost to be reckoned with; in some places, it is simply not available. 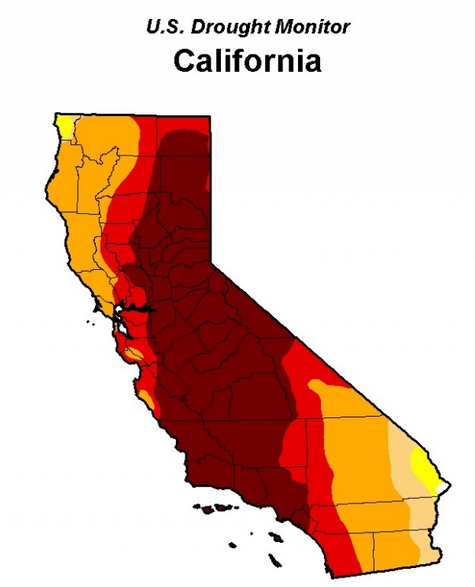 But with scarcity — or any unmet market need — comes opportunity.

"The most important (approach to the drought) is rethinking demand for water.  We've learned that we are reaching what I call peak water in California in terms of our ability to squeeze any more new water our of our rivers and aquifers. But there is enormous potential to do the things we want with less water, that is use water efficientyly," Gleick said in an interview.

Farming accounts for 80 percent of the water use in California so, as everyone scrambles for water, helping farmers reduce water is one answer. "Growing food with less water and with better soil management or better agriculture or better delivery systems," are all very possible. Reusing waste water that has been treated is another that has become very viable with technology.

But technology alone won't solve our problems, Gleick warned. "We want a marriage of smart technology and better managmeent. We are not going to solve our water problems with only one of them; we need them both."

Still, the new reality of water scarcity has opened opportunity for entrepreneurs and innovators to provide new answers for irrigation, soil management and for water recycling and water reuse.

Suddenly, water tech and agriculture tech are hot new areas after being largely ignored for decades.

Here are some of the areas sparking innovation that have come to our attention at GreenBiz.

1. Digging into the dirt with biochar

Elementary school biology taught us that plants need CO2 and give off oxygen. When plants die, they release carbon again into the atmosphere. So why not capture that extra carbon and feed it to farm plants?

Cool Planet is doing just that with its CoolTerra biochar product. The company treats biomass in a proprietary pyrolysis, or heating process, which produces a carbon skeleton along with other organic compound residues.

Cool Planet cleanses that carbon skeleton and makes a soil amendment that helps hold water and nutrients around a root system. Because biochar is essentially biomass without water and organic compounds, when it is put in the soil it acts like a sponge, attracting and holding water and other nutrients.

Field tests and commercial use have shown that fields treated with CoolTerra need 40 percent less water than those without it.

“We disassemble the biomass so what’s left is the carbon skelomass ... and we further refine it and increase its ability to absorb water and nutrients,” said Barry Rowan, Cool Planet’s executive vice president and CFO.

Ag companies have shown keen interest: The company had 100 trials going on and began to sell it commercially in the last half year, with significant demand.

Google Ventures and the U.S. government became backers. Indeed, Cool Planet received a $91 million biorefinery loan from the U.S. Department of Agriculture and $100 million in an investment round that included Google Ventures.

On top of saving water in times of drought, CoolTerra also acts as a carbon sink.

“Because we put this carbon in the ground, that enables the process to be carbon negative,” Rowan said of the technologies' climate impact. 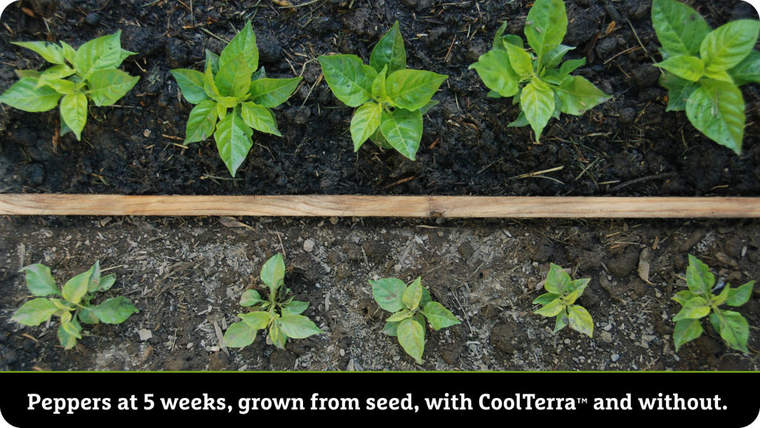 Along with bolstering water retention capability of soil, there’s also the possibility of bolstering the bonding characteristics of water.

Magnation sells a device that essentially agitates water molecules so they unbind with minerals that they’ve collected in transport from wells, reservoirs, pipes and in runoff from soil.

“Basically it breaks down the water clusters to smaller clusters” of molecules that are purer water, so “it penetrates the soil in the way rain water does,” explained Mike Jenzeh, founder and chief executive officer.

Pumped irrigation water differs from rain water because it carries with it minerals. Those minerals cling to each other and make clusters of water molecules bound to mineral molecules. Those large clusters have more difficulty penetrating soil. Also when the minerals bind to the water molecules, it traps them, including salt, into the soil.

Because mineralized water doesn't penetrate fields as well, it produces more runoff and wastes water. That creates a cycle of yet more minerals ending up in groundwater, Jenzeh said.

With hard water, a certain percent runs off the soil rather than all being absorbed. Also, hard water clusters “tend to hold the nitrogen encapsulated,” making the element unavailable to plants.

“Our systems breaks those clusters so nitrogen is available to the plants, makes plants greener and doesn't end up in the water table,” he said.

The product is all physics. Agitation is essentially what is breaking up the molecular clusters splitting the bonds of water molecules and minerals.

The product is sold as a mechanical device attached to irrigation equipment. As water flows through the system, molecules are agitated and bonds broken with minerals, so purer water comes out onto the fields.

Water reuse technologies have been around for a long time, but seldom taken as seriously in the United States as now with a third of the country in drought conditions.

Even as desalination and grey water reuse are older technologies, entrepreneurs have developed ways to cleanse and treat water to new levels of purity that make water reuse a viable alternative to hoping for rain.

Xylem is a big water technology and management company with involvement in transport, treatment, analytics, applied water systems and operations and operations in 160 countries.

But in California, as the state battles drought, it is focusing its innovation at water treatment for reuse opportunities.

“A lot of the drinking water we have in California is taken from groundwater aquifers and those aquifers over the years have been depleted," Robinson said. "So the idea is to use waste water, which is a very drought-proof water resource, and treat it to standards promulgated by the state of California division of drinking water. We exceed those, actually.”

According to the Center, “The result is up to 8 million gallons a day of highly purified water that is expected to match California primary drinking water standards.”

“A lot of the projects we are working on involve these three technologies — microfiltration, reverse osmosis and advanced oxidation,” Robinson said.

They take waste water and run it through these three processes to remove pathogens through multiple barriers and remove contaminants from industrial waste and pharmaceutical runoff.

Yet another project it is developing is cleaning up groundwater — the possibility of siphoning groundwater out and cycling it through treatment and sending it back into the ground.

Cloud computing and its ability to store and mine vast amounts of data has disrupted all sorts of industry. Now it’s starting to disrupt agriculture — in a good way.

Agriculture is a business that requires a lot of planning and judgments based on variable inputs. When water is scarce and costly, that changes the calculation in the cost benefit analysis of growing certain crops or planting certain fields.

Agriculture is in such dire straights that companies with answers are winning awards.

Syngenta, a big agricultural supplies company, won the 2015 Franz Edelman Award for the company’s use of Big Data to support global sustainability initiatives towards food production. Its application to humanitarian causes is a big part of the award, so we know it’s something.

In an interview with GreenBiz, Syngenta’s Chris Tingle, head of marketing for Enogen and Water Optimization, said his company purposely addressed water after viewing macro-socio-economic needs of a planet with a growing population and decreasing water availability.

“About two years ago, Syngenta made a conscious effort to call out water optimization to help our customers stay in business sustainably and help combat challenges of a rising global population,” Tingle said.

It has produced a Water Intelligent Irrigation Platform that combines water analytics with the actual delivery of water in precise amounts based on the data coming back to the system.

It collaborated with Lindsay Corp. to sell a precision irrigation system that lets growers remotely monitor and control their irrigation.

For California’s salad bowl vegetable growers, Syngenta is a crop protection product that helps vine crops and nut trees to build up the immune system of their roots.

Because farmers are on the move all day and their operating inventory obviously spread wide geographically, it took the advent and widespread availability of two technologies to make collecting data from the fields and analyzing it realistic: smart phones and cloud computing.

Now, several companies offer sensors that can be used from smart phones and other mobile devices to collect data from fields and even individual plants. The data is stored in the cloud and analytical appliations applied.

“We’ve built a cloud application that gives them (analytics tools) and a mobile application that everyone who works on the farm uses,” said Granular CEO Sid Gorham. “How do you build a company like this? You listen to the farmer.”

Granular has issued waves of beta products to farmers and each time asked what could be better, what do farmers need and then develops the next iteration.

Sensors on mobile devices make collecting data from the fields much easier. And cloud computing and analytics makes sorting through all that data collected from the fields a real proposition.

In time of drought or water scarcity, the wisest business decision for some farms is to sell their water rather than plant another field and irrigate with what they have.

“With water rights, you cold sell the water to another farm. But moving to that system requires that a farms understand what a gallon of water is worth to their farms” in terms of yield-per-crop-per-gallon in order to make decisions on using or selling, Gorham said.

Water in the bank: A possible solution to California's water crisis