What Apple's reuse robot says about sustainability and tech

The showstopper was "Liam," a robot capable of deconstructing used iPhones and removing component parts for reuse or recycling. Precious metals such as the silver present in the phone's motherboard, for example, could be stripped and re-purposed for solar panels, said Lisa Jackson, Apple's vice president of environment, policy and social initiatives.

“This allows us to recover the materials, high-quality materials, and reintroduce them into the global supply," Jackson said during the press event, video of which has been archived here. "Ultimately, our goal is to create breakthroughs that allow us to reuse those high quality materials in our own products."

With the splashy introduction — think stylish Apple commercial, plus strong environmental overtones — the R&D project that could have been a reverse logistics footnote in a company report was instead highlighted as a prime example of green innovation. The high profile platform helps push into the mainstream concepts such as designing for full product life cycles, or more aspirational "zero waste"and "circular economy" models rooted in resource conservation.

What might a robot designed to break down notoriously hard-to-break-down devices mean for issues such as e-waste?

But the window into Apple's massive product supply chain — the company had sold 700 million iPhones alone as of last year — also raises familiar questions about the role that consumer electronics companies play in encouraging a throw-away culture that perpetuates global issues such as e-waste.

Getting used electronics back to manufacturers (and their robots) in the first place is no easy task. Liam also won't do anything for consumers who want to fix their iPhones themselves instead of buying a new one, nor the processors handling countless other gadgets on the market today.

"I would love to see a robot take apart the iPad they introduced today," Kyle Wiens, CEO of open source product repair manual author iFixit, told me. "The big challenge is the diversity of models that are out there. You have to holistically solve the problem across all products."

As one of the world's most valuable companies, with a market value of more than $500 billion and a brand that permeates pop culture, Apple is in many ways the public face of the entire consumer electronics industry.

It's an industry that, as once-offline devices such as thermostats and cars become connected, is growing rapidly. It's also an industry that produces more than 40 million tons of waste each year, much of which ends up being illegally dumped or traded in developing countries, creating a whole host of public health and environmental issues.

That doesn't even include the controversy around "planned obsolescence," or how much electronics companies really do to extend the life of their products for as long as possible, versus counting on steady turnover of hardware to ring up additional revenue.

In fact, Apple was recently at the heart of a scandal where "thousands" of iPhone users found themselves with phones rendered "worthless" after a software update if they had been repaired by a third party, the Guardian reported. Apple argued that security protections were at the heart of the problems reported by customers.

So, what might a robot designed to break down notoriously hard-to-break-down devices mean for issues such as e-waste? In short, it's not yet clear. 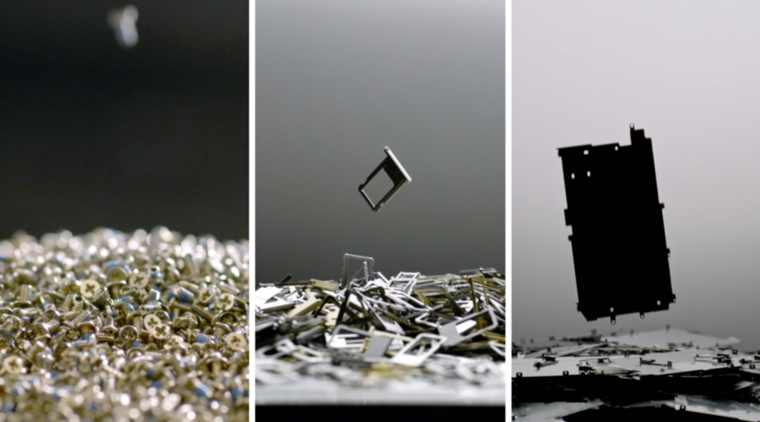 Apple
<p>An image from the Apple video introducing the "Liam" robot, which the company says will help sort recyclable and reusable parts from old iPhones.</p>

When, where and how Apple plans to use robotics to aid in product reuse was not detailed Monday. The company did not answer follow-up questions from GreenBiz about what iPhone models the technology will disassemble, where the technology might be implemented, how much material stands to be recovered and how that material ultimately might be reused.

A primary concern for critics of Apple's approach to reuse is whether the company intends to do all the work in house, potentially continuing to limit the ability of consumers and third party groups to make repairs or reuse more phones.

"They have this feeling that they still own the product after they sell it to you, and that they control it cradle to grave," said Gay Gordon-Byrne, executive director of advocacy group the Repair Association. "They are doing a good job of grave digging for the early death of products."

In her remarks Monday, Apple sustainability chief and former Environment Protection Agency Administrator Jackson preemptively countered arguments about the short lifespan of the company's products, saying, "We design our products to last. The vast majority of iPhones that we get back are reused."

What remains unclear is how many phones Apple gets back in the first place. As other electronics purveyors such as Best Buy have learned, even successful consumer take-back programs can come with high costs, particularly in locales where recycling infrastructure is lacking.

"The harder part is getting the phones to this robot," Wiens said.

The Repair Association and iFixit are among the consumer advocacy and environmental groups that back new rules proposed in states including New York, Minnesota, Massachusetts and Nebraska that would require manufacturers to release more information about product specifications that could increase competition for repairs and recycling.

"We’ve said, 'Please share your disassembly procedures with us.' They say, 'No, that’s a trade secret,'" said Wiens, whose organization has in the past criticized Apple in particular for recalcitrance to easier repairs. "There’s a closed mindset in the consumer electronics space."

While newer iPhones have merited increasingly positive ratings from Wiens' group, being easier to disassemble than Samsung's new Galaxy S7, for example, he said more could be done to standardize iPhone parts such as screws or limit tough-to-crack adhesive used on batteries.

"It is nice seeing an admission from Apple that these things need to be disassembled," Wiens said.