Billions upon billions of products and consumers served.

The quick answer is that no single magic button exists yet, if ever. As with so much of sustainability, however, the ideal endgame for circular principles is to become baked into every point of the product's lifecycle along the line of design, supply chain, manufacture and beyond.

"The killer app is that which is invisible," said Nike's VP of Business Innovation Cyrus Wadia, onstage Tuesday at VERGE 18 in Oakland. "We need to be embedding these attributes into high-performance products."

That's the end goal, but where does business stand now? Take a step back.

The term "circular economy" refers to three dimensions of a new economic model: ending waste and pollution; keeping products, materials and nutrients at the highest possible value for the longest possible time; and regenerating the natural resources and capital upon which economic systems depend. That's according to Del Hudson, the Ellen MacArthur Fund's head of U.S. and North America Operations. The British organization, which is accelerating the concept, advocates for next-level innovations and systemic shifts that most corporations have yet to follow (or lead, for that matter).

Ultimately we call it a transition, and it’s happening right now.

However, Hudson does believe that this moment has moved beyond an aspirational phase. "Ultimately we call it a transition, and it’s happening right now," she said.

That means that in the half-year since the last U.S. gathering of the Circular Economy 100, which met again recently in Oakland, more metrics, product designs and business model innovations have sprung up — with rapid growth in $1 billion enterprises, and cities using circular principles to drive climate, economic development and social inclusion goals.

Conversations are less about what it looks like to move away from the old "take, make, waste" linear model and more about how to partner to drive new, circular models forward, Hudson said. "It’s less about, 'how do I apply this to my organization,' and more about, 'who do I collaborate with as I move to this transition.'"

So what does that look like to Nike and Amazon?

If this is just the baby-steps phase of the circular economy in the United States, Nike is at least providing some of the footwear; 75 percent of the materials in its shoes and apparel consist of some recycled content. And last year the company's products used the equivalent of 1 billion plastic bottles in recycled polyester. "Sustainability has to happen at scale," which drives sustainable innovation, Wadia said. However, he could not quantify how many of Nike's products use reused or recycled materials (somewhere above 5 percent?). 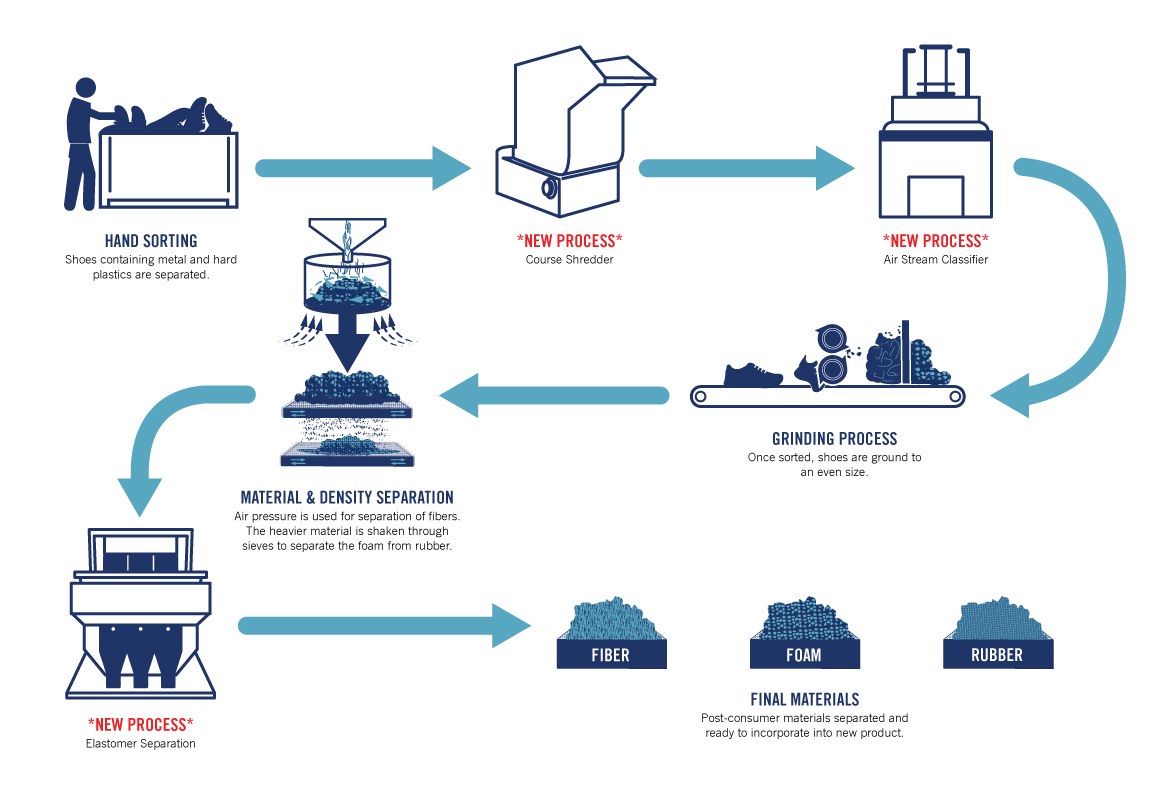 Nike with OpenIDEO recently named five winners of their Circular Innovation Challenge, which called in March for proposals to design and reuse its Nike Grind scrap material, recovered from the factory floor and old shoes. It attracted 600 proposals across 60 countries.

"There’s a really healthy solver network around the world that’s ready to work on these problems," Wadia said, describing how "one of the sexiest ideas" explored how to make "postconsumer waste look more like preconsumer waste."

Materials scientists, chemists and others are crucial to creating the materials that are "better for the planet and better for the athlete," he added. Yet with all the reach of Nike — 1 billion product units sold per year — Wadia sees that "we have not activated or even really scratched the surface to work with those communities" on furthering innovation.

As for reach, last year Amazon shipped more than 5 billion products to subscribers of its free-shipping Amazon Prime service alone. Kara Hurst, Amazon's worldwide head of sustainability, sees innovation as essential, within and beyond its logo-stamped packages. The materials, marketing and logistics Goliath is offering more refurbished products and services such as textbook rentals to replace one-time use of a product. And Amazon is continually exploring how to ship goods without overboxing them, which includes the development of a fully recyclable curbside mailer.

Is the U.S. embracing their innovation opportunity in the way that other markets appear to be going after it?

This week Amazon announced $10 million to support the Closed Loop Fund to support curbside recycling infrastructure for 3 million households over the next decade.

At EMF, Hudson sees a "renaissance" in the conversation around commercial opportunities for recycling, driven in part by policy shifts including China’s National Sword rule, which this year began banning imports of two dozen kinds of waste materials, including many types of plastics — which are now piling up around the U.S.

"Is the U.S. embracing their innovation opportunity in the way that other markets appear to be going after it? We’re seeing some signals," Hudson said, pointing to the Department of Energy re-releasing $70 million to the Remade Institute, established under the Obama administration to further low-carbon industrial technologies. It's "a good example that the innovation upstream opportunity is massive."

If there is a circular "killer app" for Amazon, which means so many things to so many people, Hurst said it's "trying to get information into people’s hands quickly" because consumers want to know how to get the highest value out a product and what to do once they're done with it. In addition, she sees that expanding community engagement and bringing more people into the conversation around reuse circularity are essential.

In addition to external outreach — which includes efforts such as an e-waste collection drive and an Alexa Skills Challenge that invites software developers to create a positive social or environmental "skill" for the Alexa virtual assistant — Hurst described internal efforts.

"What are solutions we can provide to general managers that run our fulfillment centers?" And how can they consider waste minimization and diversion, product recycling and donation and even food recycling? Amazon wants to drive "a lot of practical toolkits" for its long value chain, Hurst said.

Hudson described the circular economy opportunity as "exponentially larger when we look at the business model potential at the front end" and really explore eliminating what doesn’t currently work in business systems. That will take a lot of collaborations, partnerships and systems-thinking, as Makower described.

Organizations can send the demand signal, Hudson said. Yet "we also need action for the longer-term vision to ride out some of the policy changes we’re seeing."