Building greener cities that boost social equity is a priority from coast to coast. But beware of urban resiliency as a 'land grab.'

In East Oakland, a few blocks from the home of the champion Golden State Warriors basketball team, a series of geometric buildings and well-tended green spaces cut a striking contrast to the overgrown vacant lots, industrial equipment yards and aging corner stores that dot the neighborhood.

Tassafaronga Village, a six-year-old, $52.8 million LEED Gold housing redevelopment project, is also an example of the tradeoffs that can emerge in the push to make cities more sustainable — not just environmentally, but also socially and economically.

From Miami to New York, Houston to Oakland, the term "climate gentrification" is on the rise. It's increasingly employed by critics of green building projects that are expensive or seen as overly formulaic. The idea: That coordinated efforts to redevelop or build new structures to withstand climate change also open the door for real estate speculation that displaces existing populations, often along lines of race or class.

"Resiliency is being coded as a way to do a land grab," said David Capelli, founder and CEO of Florida smart city consultancy TECH Miami. 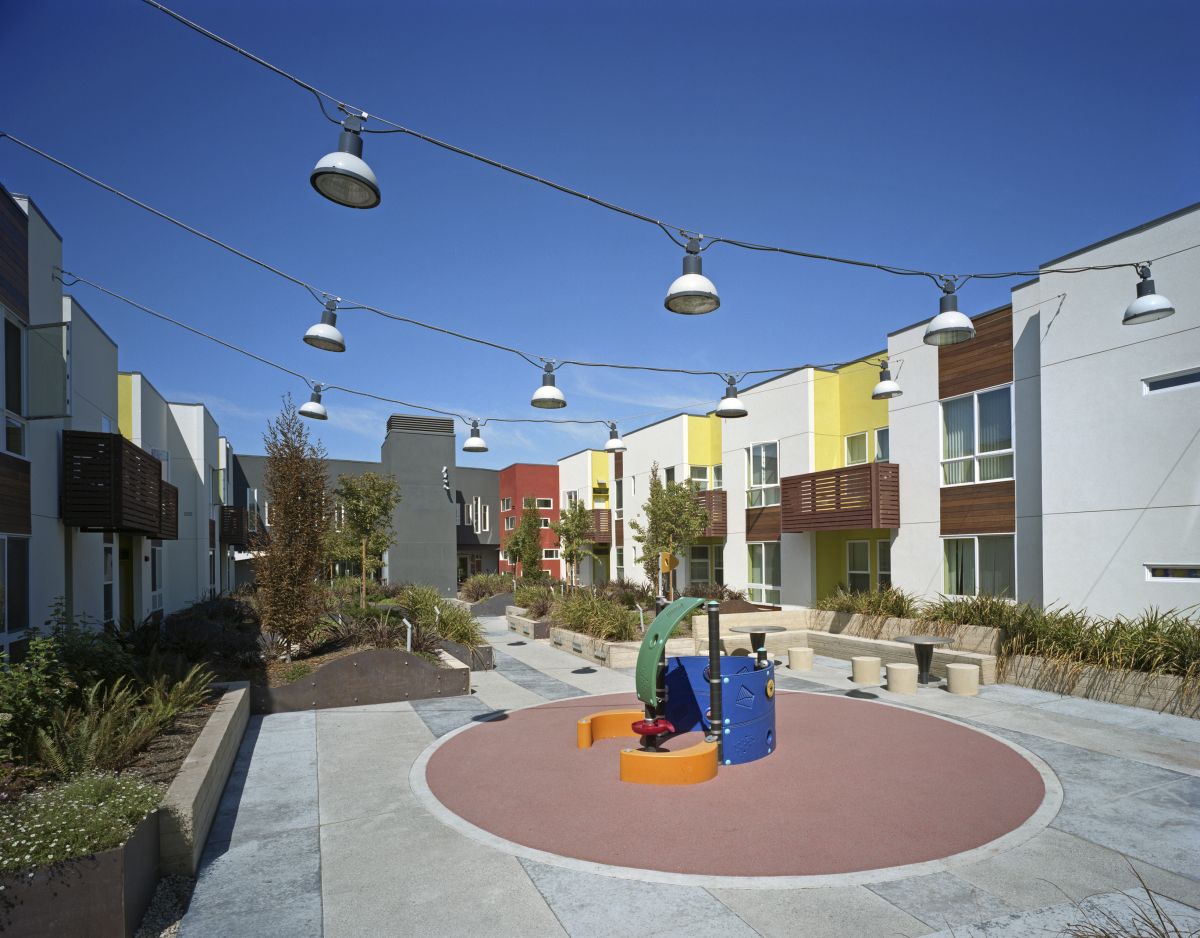 In Southern Florida, majority-minority neighborhoods such as Little Haiti that occupy higher ground in a city vulnerable to sea-level rise are at the center of the conversation. Median home sale prices have climbed from just over $100,000 in early 2015 there to as high as $229,000 this spring, according to real estate data site Trulia.

Projects meant to expand green spaces in other cities, such as the "rails to trails" High Line park in New York City and the 606 in Chicago, also have led to a spike in neighboring property values.

Still, some question an explicit link between climate adaptation and gentrification. James Murley, chief resilience officer for Miami-Dade County, categorized the jump in Little Haiti as "more of the classic gentrification that comes with a growing real estate economy," according to The Architects Newspaper.

Resiliency is being coded as a way to do a land grab.

In Oakland, meanwhile, Tassafaronga Village, with its green roofs and community garden, shows what can happen when affordability explicitly figures into sustainable redevelopment projects in historically marginalized neighborhoods.

The complex provides more than 155 subsidized apartments in a city where $2,723-a-month average rents are stretching those who earn the area's median $53,889 income or less. Still, that doesn't include the 68 households displaced during construction at the former public housing site, which housing officials called "typical for these types of overhauls," Dwell magazine reported.

The rise of resilience

Environmentalism and social justice have a long and at times contentious track record as parallel progressive causes that diverge on top priorities. Although environmental justice movements have at times crossed over with efforts, for example, to counter high asthma rates in poor or minority neighborhoods, such alignment is rarely sustained.

That's why the rise of resilience — the idea that cities should address climate-related shocks alongside ingrained social issues such as failing schools or unaffordable housing — has been positioned as a potential game changer by evangelists such as 100 Resilient Cities. The Rockefeller Foundation offshoot is funding 100 cities worldwide to hire a chief resilience officer for an inaugural two-year period that kicks off resilience planning.

"We’re also focused on the long-term, slow-burning disasters that weaken a city over time," 100 Resilient Cities CEO Michael Berkowitz wrote of the group's mission. "These stresses — poverty, endemic violence, an inadequate transportation system — are persistent and no less pernicious than sudden disasters."

That's not to say, however, that resilience efforts haven't run into skepticism about a lack of approachability or over-reliance on buzzwords.

"There are some words, like sustainability and resilience, that just sound like college people writing papers," Van Jones, political commentator and founder of several Oakland-based environmental and economic development nonprofits, told me in a previous interview.

She warned that environmental groups are advancing a 'Green Crow' evolution of Jim Crow segregation.

Some also worry that rushing to embrace resilience will obscure ingrained problems with urban planning, from a history of housing redlining that has prevented communities of color from building wealth to newer real estate deals that may accelerate rent hikes.

"We have a very ugly history on urbanism that we seem to have overlooked," said Carla Mays, founder & CEO of San Francisco-based consultancy Mays Civic Innovation. Without more deliberate effort to counteract ingrained racial or economic disparities, she warned that environmental groups are advancing a "Green Crow" evolution of Jim Crow segregation.

Among the specific sticking points: How to reconcile high-level city considerations such as green infrastructure with the day-to-day concerns of residents struggling to keep pace with the high costs of living or the ill-effects of pollution.

"When you say your No. 1 priority is biking, that’s a disqualifier," Capelli said. "That’s what’s wrong with the resiliency movement."

With their wonky phrasing and academic connotations, terms such as climate gentrification, environmental justice and reslience can veer into the abstract.

Where those concepts translate to reality, Mays said, is in business transactions or policy changes that favor certain systems over others. Writing LEED objectives into city code, she added, can risk encouraging knee-jerk reliance on large architecture or contracting firms with a track record of producing green projects that check the boxes.

"These things become a part of the code, and everybody gets gentrified out," Mays continued. "They do not have an equitable way of teaching LEED, and because of the fact they don’t have diversity on project most of the time, we’re getting the same buildings."

As a response, Mays is working with Capelli to slowly expand the number of contractors, planners and architects accredited by LEED for Neighborhood Development (LEED ND) by launching a program called #SmartCohort, backed by the Center for Social Change. An initial group of 17 participants (out of 200-plus applicants) won LEED accreditation in Miami last year. However, Mays said the group has yet to settle a five-figure invoice with the U.S. Green Building Council after covering test prep and related costs for participants.

"We’d love to be in a position where we could do more to facilitate that,” Hercules said.

When you say your No. 1 priority is biking, that’s a disqualifier.

"A lot of times people will try to put them in different buckets. Is it a social issue? Is it an economic issue?" he said. "We try to address it based on the purview of how our rating system can affect things."

For Mays, the stakes of gentrification in areas being primed for resilience-focused redevelopment are only growing as local governments move to purchase and implement new smart city technologies. On top of existing social divides, she said, new technology could cement or expand gaps in who is best served by urban planning efforts.

"People are not being served," Mays said. "We're moving online and moving to data, but that data is not representative."