What Companies Can Learn From Cities on Climate Change

How might urban climate change affect business? What can business -- and cities -- do about it? And how might each help the other prepare for a potential threat to what's clearly a mutually beneficial relationship?

The world-renowned urban climate change expert is the Co-Editor of the recently released book, Climate Change and Cities: First Assessment Report (ARC3) of the Urban Climate Change Research Network (UCCRN) published in 2011 (Cambridge University Press). The UCCRN was hatched at the C40 Large Cities Summit in New York City in 2007, with more than 300 members in cities around the world. 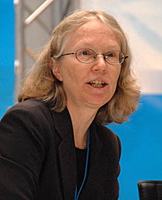 Depending on scientific estimates, cities account for 40-80 percent of total greenhouse gas emissions worldwide. The urban population is forecast to nearly double to 6.4 billion, or 70 percent of the world's population, by mid-century, according to the UN Department of Economic and Social Affairs, Population Division.

That would lift emission levels, along with urban temperatures. ARC3 projects that temperatures in the 12 cities it studied (including New York, London, Shanghai and Sao Paulo), could rise between 1 and 4 degrees Celsius by 2050.

Those radical changes challenge cities to re-evaluate how to protect people, prioritize investments, deploy assets, and rethink growth and development.

Yet, with their hands-on experience as first responders to weather-related crises, like floods, cities are also proving to be nimbler agents for addressing climate risk than national governments, Rosenzweig believes, noting that the recent international climate talks in Durban produced little tangible progress.

The book provides three sets of indicators for cities to use climate science and socio-economic research to: map vulnerability to climate hazards; manage risk; and enhance capacity for adaptation and mitigation over various time horizons.

4 Tips at the Tipping Point

Cities are already home to half the world's population, and "mega-cities," -- those with a population of 10 million or more -- are on the rise. Projected changes in the climate are likely to increase risks to urban infrastructure, transportation, resources and populations alike.

"On the adaptation side, the temperature will rise, affecting the workforce with more heat stress. Water sources will be affected, creating droughts that may affect manufacturing. Any installation on the coast could be threatened, and any facility on the riverfront risks increased flooding from storms."

3. Management. "Within institutions, how is climate change being addressed and how can it be managed? Now we're adding this to the list of things to track, so how can it be addressed? Some of the changes associated with climate are too big for a single company to handle individually, so business associations or organizations, or city groups such as the New York City Climate Change Adaptation Task Force, can help."

Since cities are also business centers, such risks are clear business concerns, too.

Yet, if companies are at risk to climate shifts, they may also hold potential solutions that could serve the economy, the environment and society, Rosenzweig believes.

With their experience in risk assessment, she says, "companies are very good test beds" for rethinking risk in light of climate change. "Business always has to re-assess risk, and climate change poses additional risks in two ways -- mitigation and adaptation."

Since both are primary challenges to cities, too, companies may prove to be good partners to cities [in a number of ways, even helping them re-evaluate risks], as threats to the climate mount.

For smaller companies, the challenges are heightened, just as they are for smaller cities, by fewer resources and less capacity. However, just as cities are proving to be faster, often more resourceful, first responders and hands-on communicators in the climate arena, so may SMEs prove to be dynamic innovation agents.

The good news? Cooperation , among companies, and between companies and cities, is likely to accelerate solutions -- and most big companies already have EHS (environment, health and safety) departments, whose responsibilities can expand to include climate.

Plus, as younger people are catalyzed to innovate and start new companies from scratch with ever-newer technologies in the urban village, the pace is bound to pick up.

Says Rosenzweig: "There's more awareness than generally recognized, because climate affects everything, so there's more opportunity for young people from all different fields to take all this on board."