Part of the path toward mitigating climate change and preventing the earth’s temperature from rising above 2 degrees Celsius involves increasing investment in both renewable energy and energy efficiency projects.

The report found that some green banks aren’t combining these services at all, and for others, the combined services represent a much smaller percentage of its total projects.

"The real opportunity is going to be if green banks can find a way to combine those projects," said Annie Gilleo, a state policy manager and coauthor of the report. "So that a customer is able to do, say, a large project on their home, make sure they’ve done all the efficiency that they can do and then look at renewables."

In addition, the report found that green banks can expand their opportunities in energy savings to improve their services to customers.

What is a green bank?

According to the Coalition for Green Capital, "Green banks are public finance authorities that use limited public dollars to leverage greater private investment in clean energy."

Connecticut was the first state to adopt the term "Green Bank" in 2011, and in a short time New York, Hawaii and Rhode Island established their own green banks.

So far, Connecticut Green Bank has deployed $281.5 million in funding for 598 projects. Those projects were funded through $232.6 million in private funding and $48.5 million in public capital. 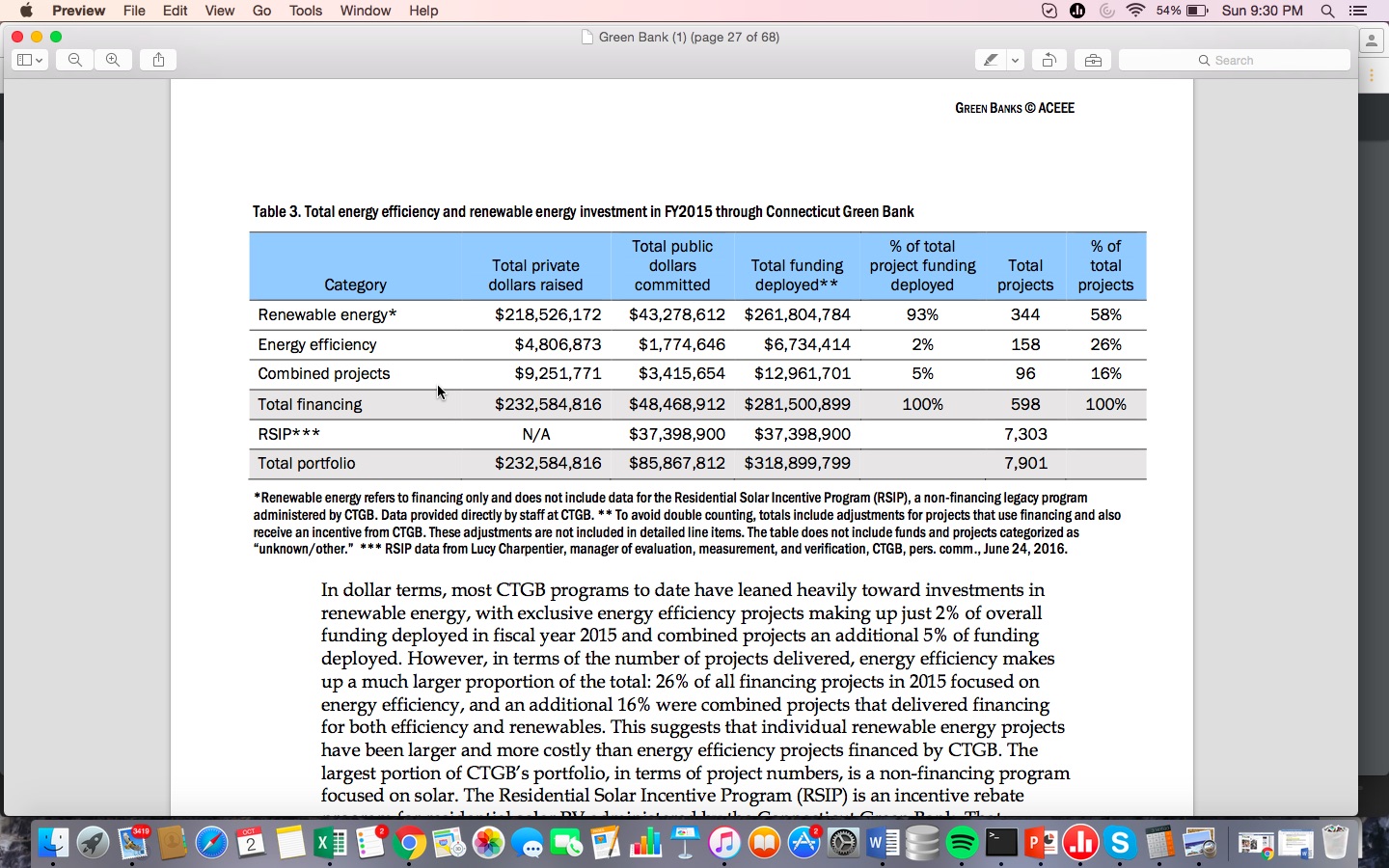 Green banks are designed to encourage investment in clean energy and help customers with financing, because the initial startup costs of renewable energy and energy efficiency projects can be expensive.

As opposed to commercial banks such as Bank of America or Wells Fargo, which are publicly held companies, most green banks are either nonprofits or quasi-public institutions. They are funded by both public and private money and are designed, in part, to bridge gaps in the marketplace.

"It’s not that traditional lenders can’t operate in the energy efficiency market," Gilleo said. "It’s just that it's new, it's emerging, it’s often more complicated with small customized projects as compared to the housing market where you can easily bundle loans."

Green banks use private money to leverage energy efficiency investments and make it cheaper for customers through buying down interest rates, loan loss reserves, loan guarantees and other forms of credit enhancements.

Credit enhancements are defined in the report as "any method that offsets some or all of the risk for the financier," often through loan loss reserves where funds are set aside by green banks to cover all or a portion of losses on loans resulting from default.

Additionally, many green banks have a policy mandate requiring them to offer financing options for low-income and multifamily projects to lessen the cost of these projects.

Connecticut Green Bank, for example, has an explicit mission to serve low-income and multifamily market and 22 percent of its projects it deployed funding to were in distressed communities, according to the report.

How successful are green banks?

While states are increasingly looking at green banks as a way to spur on renewable energy projects, there is little data to accurately determine whether green banks have been successful, as green banks are relatively new.

"Right now we have pretty limited examples to work with, so it’s still kind of a trial-and-error period," said Gilleo.

The success of green banks is hard to measure and it also depends on the goals of the state and how far along the banks are in their development process.

For instance, Hawaii’s green bank, the Hawaii Green Infrastructure Authority (HGIA), was created in 2014 and established two solar PV loan programs, one for consumers and another for nonprofits.

So far, both programs have deployed funding to only a few projects as the consumer lending program has made just 12 loans so far and the program for nonprofits has not made any loans.

Gilleo said that Hawaii, however, recently has seen a jump in the number of its loans.

She said at first, the HGIA had only completed three loans, but that number rose to 12 because the green bank reevaluated its goals.

The report analyzed green banks energy savings programs, undoubtedly another important initiative in meeting the climate goals set forth in Paris; however, the report found that many green banks do not have a specific mandate for energy savings.

According to the report, green banks that reported their data reported statewide incremental energy savings of less than 0.01 percent of statewide electricity sales.

Gilleo said that it is just too early to say whether green banks as whole have been successful, and green banks should not be looked at as an end all be all to incentivize renewable energy projects or energy efficiency projects.

"Green banks are a tool in the toolkit. They are not the silver bullet, but they are a great way to expand the ways that you are able to offer programs to customers," said Gilleo.