What does 'zero waste' really mean?

Kelly Harris, a shop floor technician on the assembly line at MillerCoors' Trenton, Ohio, brewery, took up an avocation in 2008.

He heard that his brewery was striving to send zero waste to landfills, and was already 85 percent of the way there. So he set out to find a way to close that gap — an individual quest representative of a bigger trend toward corporate and municipal zero waste goals, which aim to radically increase resource efficiency but often lack a concrete road map to implementation.

"As I was driving my forklift out to dump a hopper of trash, I realized that almost everything there looked like it could be recycled," Harris recalled, describing the epiphany in a blog post the Mother Nature Network. "I thought, 'We can do better than 15 percent.'"

Harris developed a business plan for how his brewery could eliminate waste to landfill and presented it to MillerCoors management. He was given the go-ahead, and he set the process in motion.

Within 23 months, the Trenton brewery became the beer giant's first to achieve zero waste to landfill. It was so successful that management asked Harris to bring his plans and educational efforts to other MillerCoors' breweries.

This month, the company announced that all eight of its breweries had achieved so-called zero waste to landfills, with nearly 100 percent of MillerCoors' brewery waste recycled or reused and the balance going to waste-to-energy conversion facilities, said MillerCoors Director of Sustainability Kim Marotta.

The immediate environmental impacts of large-scale waste reductions efforts are clear. Since 2009, MillerCoors reduced its waste by 89 percent, which the company estimates is equal to keeping more than 9 million pounds of waste out of local landfills. 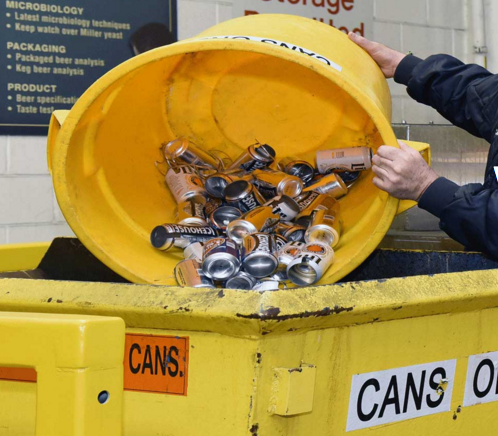 But cutting corporate waste is also at the heart of the circular economy movement, where companies are urged to reduce natural resources used in the production process by cycling materials back through supply chains.

The problem from a logistical standpoint is that "zero waste" isn't as straightforward as it sounds. A few key questions: Is 0 percent waste even hypothetically possible for business operations? What happens if something can't be recycled? Do the alternatives that companies employ to reduce reliance on landfills actually benefit the environment?

Those seeking to answer those questions should be prepared to get their hands dirty.

"We learned that it really is employee led," Marotta told GreenBiz. "You have to change the culture, whether it's by every line or every shift."

Measure what you manage

Before sustainability executives start campaigning for support of a new zero waste goal, there's the matter of clarifying what exactly the term means.

"Defining zero waste is really the first place we recommend that any company start with," said Tom Carpenter, director of sustainability services at Waste Management. "What do you mean by it?"

Does zero waste for that company mean no waste goes to landfills, or does it mean eliminating all waste byproducts? Because reaching zero waste would seem physically impossible, it's come to be commonly accepted that getting within 2 percent of that — or diverting 98 percent of waste through reducing, recycling or reusing — fits the definition.

Carpenter, who advises companies on reducing waste and diverting waste away from landfills, recommends embarking next on a facility-by-facility assessment.

"Once it’s defined, start to measure your waste footprint," he said. "What is the volume going to landfills, how much to recycling and how much to hazardous waste?"

"A key step is to get a really good characteristic of that waste, to know exactly the volume, quantities and tonnage," Graff said. "You do it by doing a waste sort."

Carpenter and Graff said eliminating waste at the outset is often the most value-added piece of the process.

"Look at ways of procuring less and so eliminating waste in the process," Carpenter said. "Sometimes as a business we procure too much — the same thing we do at home when we buy too many jugs of milk and one goes to waste."

After reduce, of course, comes reuse.

From a business perspective, the ultimate goal "is to find the highest and best use for that material," wringing more value out of an original resource or ingredient, Graff said.

A company may find ways to reuse a waste byproduct internally, the way Tyson Foods uses all parts of an animal or General Motors uses metal scraps from its door stamping process as resource material for making other parts.

If a material presents a dead end in terms or reuse or resale, perhaps it's time to consider design alternatives, Graff said.

"Does this material in any way, shape or form have economic value to us or value to another industry?" is the question to ask, she said. "Or should we be trying to design this material out of our system?"

Marotta said MillerCoors has made such substitutions. One was pallets used to transport cases of beer. The company had been using wooden pallets that would get beaten up and need to be replaced often, spurring a switch to reusable plastic pallets that saved the company money and reduced waste flow.

In another example, it removed waste baskets lined with plastic bags from all the offices at headquarters, instructing people to go to centralized recycling centers with their waste. The company saved $18,000 on plastic bags alone, she said.

Brewers may be associated with easily recycled materials such as bottles and cans, but MillerCoors also had plenty of other harder-to-handle materials to contend with in its quest for zero waste to landfill.

Then he worked on making the recycling system simpler to understand and more ubiquitous.

"He put in a system of standardized color coding — blue for glass, yellow for aluminum, beige for cardboard," and added separate bins for plastics, composting and unrecyclable trash, Marotta said. Then, he convinced the brewery to put those color coded bins all over the plant.

Last — and most important, in this case — Harris set about educating and evangelizing among his fellow workers about reaching the goal. Harris was not available for an interview for this story.

The new recycling and employee training efforts came in addition to existing reuse and recycle programs. MillerCoors already repurposes spent grain by sending it to ranchers to use as feed for cattle and sends spent yeast to pet food companies.

For sure, MillerCoors' infrastructure investments to reduce and reuse waste were significant. In addition to sending out the spent beer ingredients, it reuses broken glass in glass bottling operations. And it has arrangements with waste-to-energy conversion plants in several localities so that waste that can't be recylcled, such as cafeteria waste, is turned into electricity — a tack that some environmental advocates oppose because the process still emits pollutants.

Putting one foot in front of the other

Even with functional systems in place to curb waste, getting to the zero waste milestone is tough.

Some things just don't recycle or re-purpose, and other things end up in compactors despite a company's best efforts to discourage that.

"Most business manufacturers can get to about 80 percent of diversion from landfill, but that last 20 or 10 percent is very difficult," Carpenter said.

There's a reason for that, Graff said.

"There’s always the 80/20 principle," she explained. "It is a real challenge because recycling infrastructure is not consistent around the world."

In recent years, privately financed groups such as the Closed Loop Fund have launched with a goal of supporting cities in building out better recycling infrastructure.

Still, the current fragmented infrastructure landscape, coupled with some companies' penchant for highly specified materials, often results in situations where materials are "technically recyclable, but we would have to set up a specific recycling (center or stream) for example specialty metals or a byproduct that could serve as a commodity for another system," Carpenter said.

He cites paint sludge used to make railroad ties as one example of a material that could end up in the compactor without somewhat specialized local recycling capabilities or making special arrangements with a railroad tie manufacturer.

That last 20 or 10 percent is very difficult.

The challenge at that step, Graff said, is often geography. There may be a market for paint sludge in some geographic markets. The example she used is flexible films, which retailers use and dispose of, but which rarely is part of a municipal or regional recycling infrastructure.

"They take a hard look at the available (recycling) technology, and it becomes a place-based exercise," she said. "At that point, we work with clients a lot of the time to reach outside their production process and share with others who have the same goal to get that material recycled. It’s about aggregating quantities with others."

In the current commodities market influenced by the low price of oil and falling demand from China, however, companies have an added challenge in offering a recycled feedstock for sale when potential buyers can use raw materials so cheaply, Graff said.

"It really becomes a place-based approach when trying to scale," she said. It requires looking at commodities available in a region and material flows to get a sense of "the boundary of a product."

For those seeking a starting point on zero waste goals, Waste Management and Resource Recycling offer a few tips:

A detailed audit often also will produce surprising results at early stages of setting a new waste goal, Graff and Carpenter said. A company may find that all recyclable things don’t make it to recycle bins, or that a significant quantity of a waste has been ignored as out of the mainstream.

Appealing to corporations' interests in being well-managed and operating with long term costs and benefits in mind is important given current commodities pricing market. Such companies are also cognizant that consumers want to do business with eco-friendly companies.

While companies such as Best Buy also have witnessed firsthand the economic ups and downs that can accompany waste mitigation efforts such as consumer take-back programs, waste reduction also can have positive internal impacts on priorities such as employee engagement.

"Companies that embrace some sort of zero waste strategy have seen how it sparks some innovation and engagement of employees," Carpenter said. "I've seen these programs have the ancillary benefit of an engaged workforce."