Inside the grand limestone and marble New York City Hall last week, civic lawmakers voted overwhelmingly for a set of bills that represent a new frontier for regulating Uber and Lyft.

The legislation makes New York the first city in the United States to cap the rapid expansion of ride-hailing services and impose minimum wages for their drivers. The city maintains that these measures, which comes with a one-year moratorium to issuing new vehicle licenses for these services, are necessary to solve two big problems: eroding incomes for drivers; and traffic congestion.

The bills, which Mayor Bill de Blasio promises to sign, also set the city up to impose more limits as it carries out a study of the economic and social impacts of this new class of cabs. In New York, the services have become more popular than traditional taxis, lured people away from subways and been blamed for the suicides of six taxi and livery drivers beset by declining incomes in the face of increasing competition.

How New York integrates ride-hailing services into its massive transportation landscape will offer some good lessons for other city planners as growing populations worldwide give rise to more and bigger cities.

Already, critics warn that the new regulations will lead to more wait time and expensive rides and do little to ease traffic snarls.

"I'm not trying to be a doomsayer, but it does seem like the city is throwing the baby out with the bathwater by curtailing a useful and promising service," said Austin Brown, executive director the Policy Institute for Energy, Environment and the Economy at the University of California, Davis. 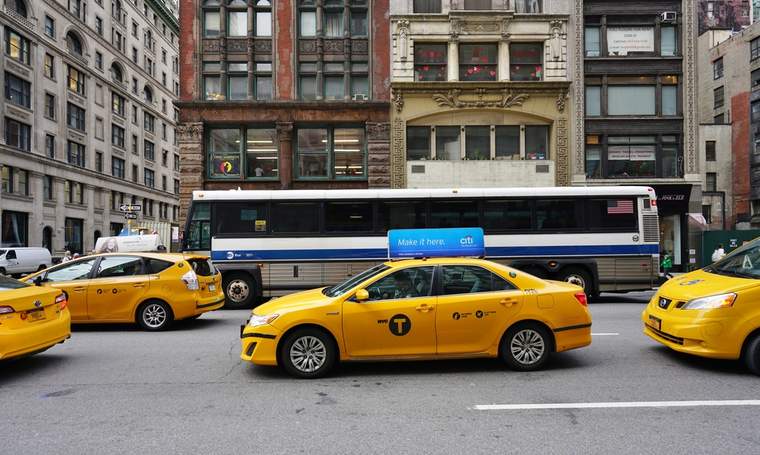 Shutterstock
A Yellow Cab taxi in New York City. Taxis face intense competition from ride share services such as Uber and Lyft.
For Uber and Lyft, the new cap on licenses and wage requirements will force them to figure out how to continue to thrive in their biggest market in the country. The ride-sharing companies face similar pushbacks from other cities that have cleared the initial learning curve of understanding this new technology and service model in order to figure out how to regulate it.

Under the threat of losing its license in London, Uber made some major changes in the past year to report crimes more promptly, conduct background checks on drivers and limit them to working only in areas allowed by their licenses. Drivers also must take breaks.

Asked for a comment after New York passed the new rules, a spokesperson for London Mayor Sadiq Khan said in an email: "Sadiq firmly believes that private hire drivers should be treated fairly, have reasonable working hours and be able to earn a decent wage. He continues to push for powers from the government to allow (Transport of London) to cap the number of private hire vehicles. He is also calling on businesses, including private hire operators, to commit to paying their drivers the London living wage.”

Other cities that have tussled with Uber aren't likely to imitate New York’s actions anytime soon. Representatives for San Francisco, Los Angeles and Austin pointed out the fact that they lost the ability to regulate Uber and Lyft when their states stepped in to take on that role.

It's been difficult for U.S. cities to pass congestion pricing. It's the general consumers who think the roads should be free.

That development doesn't sit well with some city officials. San Francisco, for one, is suing California over a state law that prevents the city from regulating ride-hailing services through business licensing.

Uber and Lyft arrived at New York during a time of pent-up demand for more efficient and available cabs. The city saw its population grow by 5.5 percent to reach 8.6 million between 2010 and 2017. Its state-run, sprawling subway system has struggled to accommodate, leading to equipment problems and delays that drove people out of the subways and into Uber and Lyft cars.

The hail-by-app cabs also have served many New Yorkers who couldn't get taxis easily before, from residents living farther away from the city center to people ignored by taxi drivers because they were black or other minorities.

The city’s demand for more cabs and better services dovetailed nicely with a key strategy of the Uber model, which is to grow quickly and create a massive network of vehicles for hire. It has won loyal customers by offering simpler and faster ways to get a ride and cheaper fares than yellow taxis.

The result has been a big jump in the number of cars from Uber and fellow ride-hailing services that serve the city, from 67,000 in 2015 to 130,000. The city has been processing roughly 2,000 license vehicle license applications per month.

The city also never imposed the same rules on Uber and Lyft that have made driving yellow taxis a good paying job and boosted the value of the medallions required to operate the traditional taxis. In contrast, the city set base fares and additional rates and limited the supply of yellow taxis by keeping their number fairly constant over the years, at around 13,600. Until five years ago, yellow taxis were the only cabs allowed to pick up street hails.

Tough competition from Uber and Lyft has caused the auction prices for the medallions to plummet from more than $1 million four years ago to between $120,000 and $400,000 these days, according to city council documents. As a result, drivers or investors who borrowed money to buy the medallions years ago are increasingly finding it difficult to make enough to pay off the debt or recoup investments (investors such as hedge funds have bought medallions and leased them to drivers).

The suicides of six cab drivers since December created an enormous political pressure for City Hall to act. One killed himself in front of the City Hall with a shotgun after posting an emotional note on Facebook that blamed the city’s political leaders for the growing competition and falling incomes he and other drivers had experienced.

"There are so many cars on the road that it's hard to find fares. It drives down the ability of drivers to make a living," said Councilman Stephen Levin, who sponsored the bill to adopt the one-year cap on new licenses, during a press conference before the City Council voted for it. "We are raising the quality of life."

City officials say the proliferation of Uber and Lyft has lowered the occupancy rates for all cars for hire, suggesting an oversupply of cars or a need to improve dispatching. A study (PDF) shows that the use rate of all those vehicles, measured in the portion of the miles driven that carried passengers, was 62 percent in 2017. Corey Johnson, speaker of the City Council, wants to see 80-90 percent instead.

The ride-hailing companies have resisted efforts by cities to collect more data, citing concerns over competition and privacy.

Transportation experts say capping the number of cars for hire isn't the best solution to unclog heavy traffic. They doubt New York will have the courage to impose a better but politically unpopular approach: congestion pricing. A congestion pricing scheme, such as the ones in place in London and Singapore, imposes fees on all drivers, not just cabs’, that enter busy zones during certain times of the day.

"It's been difficult for U.S. cities to pass congestion pricing. It's the general consumers who think the roads should be free," said Regina Clewlow, CEO and co-founder of Populus, a venture-backed company founded in San Francisco only last year that provides transportation data and analytics to primarily cities and automakers.

The lack of ridership and other data from Uber and Lyft has been part of the regulatory battles. Cities increasingly require the companies to turn over data to help them make better transportation planning decisions. The ride-hailing companies have resisted those efforts, citing concerns over competition and privacy.

Massachusetts began requiring data, although limited in scope, last year, and regional transportation planners would like more. The first-year data from 2017 shows that Uber and Lyft ran 65 million trips in the state, although most of them were in larger cities such as Boston and Cambridge, said Eric Bourassa, director of transportation planning at the Metropolitan Area Planning Council.

Bourassa said it’s too early to talk about limiting ride-hailing services because they account for just 3 percent of all mode of transportation in the core of Boston.

"We need more detailed information, such as where the trip stars and the amount of time they are carrying passengers," he said. "There isn't enough information to truly understand their impact."