What Siemens, Tesla and Philips have in common

Some of the world's biggest companies are thriving in stock-market value because of — not in spite of — their desire to energize the clean energy future. That is especially true of the biggest multinationals selling energy efficiency technologies and services, the likes of Siemens, Schneider Electric, ABB, Panasonic and Johnson Controls.

All five of those companies are ranked in the Top 10 of the latest Carbon Clean 200 (Clean200) ranking. The list was created last year by two non-profit organizations that help institutional investors get a better handle on how the transition to clean energy could affect their financial holdings. The idea is to recognize large-cap stocks — the threshold to be included is at least $1 billion in market capitalization — that are benefiting from this evolution. The companies in question must generate at least 10 percent of their annual sales from products and services related to "clean energy sources."

Rounding out the Top 10 are Toyota, which is putting a big push behind hydrogen fuel cell vehicles; massive wind player Vestas; transportation company Bombardier; and utilities Innogy and SSE, both of which are making big plays in renewables. (Here's where things stood at the last major update, in Febuary.)

More on the inclusion criteria in a moment, but here's the big takeaway: During the 12 months ended June 30, the publicly traded stocks included on the Clean200 generated an aggregate return of 16.5 percent compared with a 1.2 percent for a comparable benchmark used to track the progress of companies that are heavily reliant on revenue from fossil fuels, the S&P 1200 Global Energy Index. If anything, their returns have gotten better since the start of the Trump administration, which has taken a hostile position toward supporting clean energy program.

"Almost poetically, the Clean200 surged past the fossil-fuels benchmark on inauguration day and has not looked back since," said Toby Heaps, the CEO of Corporate Knights and co-author of the latest quarterly report about the ranking. 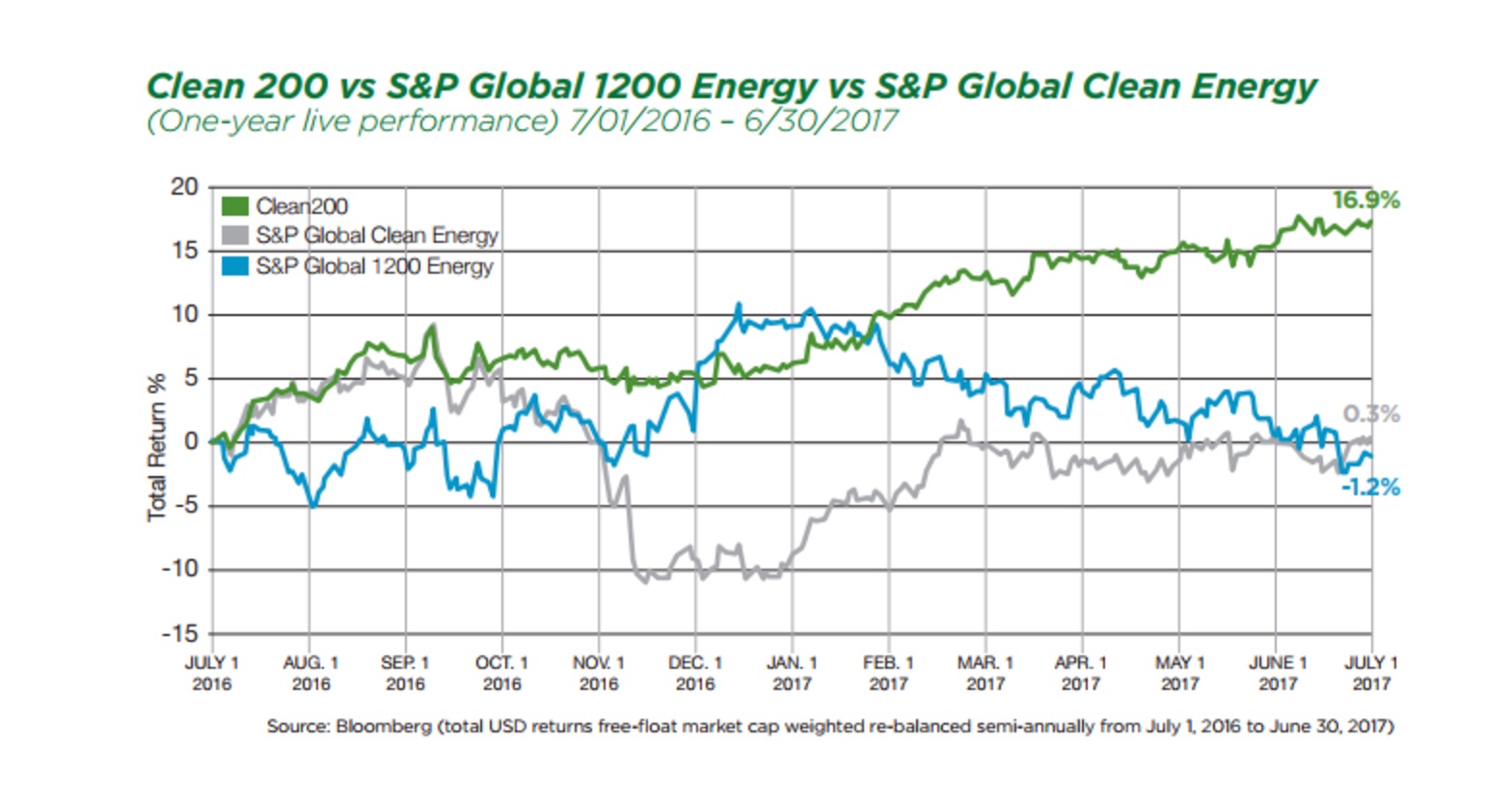 As my colleague Anya Khalamazyer reported last week, well-respected investment firms are willing to pay the price for more research and metrics about how well companies perform on environmental, social and governance (ESG) issues. Morningstar's decision to take a 40 percent stake in Sustainalytics vividly illustrates the hunger for better data.

The report creators use a lot of negative screens to filter the list. For starters, oil and gas companies are automatically out, as are utilities that generate less than 50 percent of their electricity from renewable or clean power sources. The analysis also boots businesses that are involved in weapons manufacturing, deforestation, the use of child or forced labor, or those that pay for lobbyists that speak out against climate change.

To be clear, the Clean200 isn't an officially recognized ESG index, and the groups behind it are quick to point out that they aren't investment advisors. The authors note:

But the real takeaway continues to be that the clean energy story is global and it is no longer niche. Over 30 countries are represented by the Clean200, which have an average market capitalization of $8.3 billion and generate over $353 billion in clean energy revenues per year. While the stock market continues to break records in the short term, the long-term clean energy expansion continues afoot, regardless of what happens in the White House.

What the Clean200 does recognize, however, is companies already generating an appreciable amount of their annual revenue from products or services that directly tied to the clean energy transition. The energy efficiency giants on this list are benefiting from building automation technologies, lighting retrofits and energy performance contracts — most have diversification on their side.

Plenty of household names are on the list, such as electric vehicle darling Tesla, which showed up at No. 13; and Sharp, the Japanese consumer electronics powerhouse. Dong Energy — which shines among European utilities that have ditched coal — wound up at No. 20. Some are names you don't know but should, such as Umicore, a 10,000-employee materials recovery company that got its start in mining and smelting.

Something else you'll also notice: many of these companies aren't exactly spring chickens. The predecessor companies for Umicore were founded close to two centuries ago. Even Vestas, which you probably think of as a newfangled wind company, has been around since 1945. Tesla is barely a teenager, though, while BYD is technically a millennial.