The notion of a Green New Deal has been around for a while. Thomas Friedman coined the phrase in 2007, and Green Party candidate Jill Stein campaigned on it back in 2012. Today, the idea seems to have gained traction in Congress. But the Green New Deal that has been the subject of hot debate, championed by freshman U.S. Representative Alexandria Ocasio-Cortez (D-NY), is shockingly light on detail. It is aspirational — more of an introduction to a policy paper that will set the agenda for the 116th Congress to focus and (perhaps) deliver meaningful policy by 2020.

Meanwhile, the city that is home to the U.S. Capitol Building where this still-nebulous plan is being explored recently passed a very real new deal: aggressive, practical legislation to combat climate change. The new law will have a broad impact on the built environment in Washington, D.C., and your city could be next.

A roadmap for zero emissions

As someone who lives and works in Washington and devotes my career to greening buildings, I believe Jan. 18, 2019 — the day Mayor Muriel Bowser signed the landmark Clean Energy DC Omnibus Act of 2018 — will be a turning point in urban building policy as we know it. Full disclosure: I may be biased. I’m a member of the district’s Green Building Advisory Committee that helped develop the action plan that led to this bill, and I provided testimony for it in two city council hearings.

Highlights of the new climate law include a mandate for Washington to move its entire electricity supply to renewable energy sources within the next 13 years. By 2032, the nation’s capital also intends to phase in the country’s first 100 percent renewable portfolio standard for building energy use and cut greenhouse gas emissions in half. By 2045, all the city’s public transportation and fleet vehicles should be switched over to electric or another zero-emission technology. Looking even further ahead, Bowser has pledged to make the district carbon neutral by 2050.

The nation’s capital intends to phase in the country’s first 100 percent renewable portfolio standard for building energy use and cut greenhouse gas emissions in half.

As a resident, I’m pleased that Washington, which in 2017 became the world’s first LEED Platinum city, will continue to be a model for other cities seeking to initiate progressive, local-level changes to create more sustainable places.

As an architect, I’m thrilled to see the first legislation in our country’s history targeting the performance of existing buildings. The ripple effect on Washington’s building owners and operators — as well as our entire architecture, engineering and construction (AEC) community — will be dramatic.

Buildings generate 50 to 70 percent of most cities’ carbon emissions. In Washington, where there is a relatively small industrial footprint and the city has invested heavily in public transit and alternative transportation, the amount is even more: 74 percent.

Although new building codes have established more stringent energy efficiency requirements, only 1 to 2 percent of the U.S. building stock turns over each year. Here in the capital, despite the fact that we’re experiencing more new development than most cities, it’s still less than 3 percent. This leaves a vast swath of legacy buildings with unchecked energy consumption. Codes don’t affect their energy use until the owners apply for renovation permits.

To meet Washington's carbon-neutral goal, about half of the city’s existing buildings over 10,000 square feet will need to boost their energy performance. I expect to see substantial investments through the district in building retrofitting, re-skinning, repositioning, and heating, ventilation and air-conditioning (HVAC) system upgrades.

The Clean Energy DC law has expanded Washington's mandatory building performance benchmarking program to include all buildings of more than 10,000 square feet — down from the previous threshold of 50,000 square feet.

This more robust benchmarking program establishes a Building Energy Performance Standard (BEPS) that mandates minimum energy-efficiency standards that are no lower than the median Energy Star score in Washington for each building type. According to the Department of Energy & Environment’s (DOEE) publicly available benchmarking data, the median Energy Star score for the city’s commercial buildings was 74 in 2017 — considerably higher than the national median of 50.

A more robust benchmarking program mandates minimum energy-efficiency standards that are no lower than the median Energy Star score for each building type.

For the next two years, the DOEE will work with a special task force, including representatives from across the city’s development community, to specify the BEPS for each facility type. After 2021, all buildings that are part of Washington’s benchmarking program will be required to meet the agreed-upon energy-use standards or have a specified amount of time to:

Jurisdictions that set aggressive energy goals need to support private investment in these projects. Clean Energy DC comes with enhanced green financing options, with the city kicking in $40 million more to its Green Bank. As the first green bank in a U.S. city, the DC Green Bank was established in 2018 to provide loans, leases, credit enhancements and other financing services for clean energy projects. The Green Bank initially was funded from the city’s renewable energy development fund, which utilities and energy suppliers pay into if they miss reduced emissions targets. One of the Green Bank’s innovative features is that when borrowers use money generated by energy savings to pay back their low-interest loans, it’s reinvested into the bank.

As owners respond to the higher costs of carbon emissions and the demand for new energy-efficient technologies rises, prices inevitably will come down.

A Green New Deal could establish a national Green Bank for communities interested in setting up building energy performance standards that are benchmarked using online tools such as the Environmental Protection Agency’s Energy Star Portfolio Manager.

Coming to your city next

Still missing from a potential Green New Deal are any policy details. By contrast, Clean Energy DC already spells out specific energy goals, deadlines and processes for hitting those goals. Other cities easily can pick up and run with this legislation as a policy template.

More than 100 U.S. cities already have committed to transitioning to 100 percent clean, renewable energy. As they understand what exactly they need to do to achieve 100 percent renewable electricity, these cities will have no choice but to join Washington in attacking the energy use of existing buildings.

Over two dozen cities already have mandatory benchmarking and energy scoring programs for existing buildings. We know that owners and operators who track energy use are more likely to look for ways to find efficiencies and energy savings.

As benchmarking programs and performance standards keep expanding into more cities, we’ll see the adoption of more outcome-based energy codes that call for building owners to monitor ongoing energy performance. Designing low-emissions buildings is one thing — they also have to perform.

The growing buzz around a Green New Deal makes me optimistic that our government eventually will ramp up broader climate action at the federal level. For now, the actions our cities are taking at the local level are critical in helping us avoid global climate disaster. 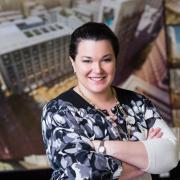 See all by Anica Landreneau