What will it take to put circular thinking into practice?

Ever take apart a desktop printer? Myriad screws, metal sheets, coated wires, springs, fans, circuit boards and plastic shapes are jammed together. Wheels are tucked inside with a tightly-fused plastic cartridge holding ink or a laser. Easily a thousand pieces are in one simple desktop printer used in small offices.

Add up all of these individual parts and you get some real value.

Lots of electronic devices need tiny screws, springs, fans, metal, circuit boards and plastic casing.  If they were all made in standard sizes, then reusing them would be easy and a big cost saver — both for manufacturers and consumers.

And for the earth. Reusing the components of a desktop printer or a computer monitor, television, cell phone, etc., would keep those metal parts, wires, screws and plastic casings out of landfills or avoid the toxic burning process that disassemblers resort to in the typically impoverished location where electronics recycling occurs.

Still, most consumer products — electronic or otherwise — are not designed for reuse in the remanufacturing of new things.  And most users don’t think much about what will happen to their old devices as they rush to buy the latest version.

To be sure, the disposal of electronics is better than it was a decade ago when unwanted electronics were merely tossed into landfills.

Now, a significant amount of e-waste is collected for recycling. But those operations often stretch overseas, to a handful of poor countries, where impoverished populations often must take them apart to get paid for parts, according to published reports.

Because so few goods are manufactured with end-of-product-use in mind, plastic and metal parts are hard to separate. Often, disassemblers in Bangladesh,  India, Nepal and elsewhere burn exterior plastic to reach more valuable metals insdie, in the process inhaling toxic fumes, according to scientists at the Berkeley Center for Green Chemistry.

At the helm of efforts to re-think these scenarios are organizations focused on circular economy thinking and cradle-to-cradle product design.

The circular economy was a big topic of discussion in the San Francisco Bay Area last week, where proponents of this economic mindset made the rounds to several events.

“What if waste could be valorized?” asked Dame Ellen MacArthur, who founded an organization to espouse circular economy thinking and practices, the Ellen MacArthur Foundation.

“We now live in a linear economy. We make something, use it and throw it away,” MacArthur said at the Ceres Conference 2015.

But if a discarded product is looked at for the value of the sum of its parts, that changes the game, she added. 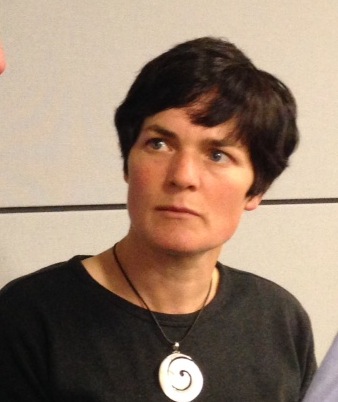 “That would be a circular economy, a different way of valuing in the economy,” she said.

Her Foundation and it's Circular Economy 100 campaign are dedicated to convincing companies — and societies  — to think differently about product design, manufacturing and consumption — to think with the end in mind, or better yet to think with no end.

SunPower is currently honing circular economy manufacturing in the making of its solar panels. The process results in nearly zero waste, and panels are built for components to be reused.

To inspire its employees — as well as other Silicon Valley engineers — to think of the benefits of parts early in the design phase, the company invited engineers to a tear down lab where they took apart printers, analyzed content and re-thought design.

“On one side, you have metals and things you want to keep entering the economy because they don’t biodegrade” MacArthur said. “In a circular economy you wouldn’t own that machine, but lease it because when done you can return it to the manufacturer who knows all the materials inside of it and knows their value."

One pioneer in materials reuse and recycling was, ironically, the industrial printer maker Xerox Corp. Its business model for the equipment hinged on lease big printing machines to companies and selling related paper and maintenance services.

Another pioneer is the commercial carpet industry. Carpet makers Interface, Shaw and Desso lease their carpeting to commercial building owners or commercial tenants.  When the carpets are worn, or users remodel rooms, the carpet company takes the carpet back, separates the fibers from the backing and recycles both into manufacturing new carpets for lease

Scores of other companies design with reuse in a circular economy in mind.

Renault is doing it with auto parts and engines, MacArthur pointed out. It leases engines instead of selling them and takes them back at the end of the customers’ use to remanufacture the parts into other products. Renault also offers to repair vehicles and it operates a dismantling operation.

Patagonia and H&M do it with clothes. Patagonia promises customers it will repair any broken zipper or ripped fabric so a jacket’s life is prolonged. It also recycles jackets if the customer is just done with it.  H&M collects old garments in any condition and sorts them for reuse or recycling the fabric.

SunPower is doing it with solar panels and the supplies used in solar electric systems on buildings. Marty Neese, SunPower chief operating officer, said the company is approaching a zero waste model in its operations. It has been recognized for Cradle to Cradle Products Innovation for the way it makes panels in its Mexicali, Mexico plant.

Within the broader economic landscape, however, companies that design and manufacture for reuse are a small minority in a global economy running out of resources.

Recognzing the work left to do to curb waste at industrial scale, SunPower's event last week gathered engineers and designers from several Silicon Valley companies for a "beneficial by design" discussion and workshop.

The printer disassembly was intened to emphasize the design changes that could be made to allow printer scraps to be reused.

Engineers from the solar provider's staff, as well as Apple, Hewlett-Packard, Cisco and other nearby institutions, armed themselves with screw drivers, philips drivers and wrenches.

Their chief recommendations? Build desktop printers out of standard sized parts so the metal screws, springs, plates and plastic cartridge casings that could be reused.  Reuse the circuit board by reprogramming it.

Many in attendance advocated modular construction. If the printers were constructed in modular fashion, they would be easier to repair; parts could be taken off in sequence to access a broken component.

Lease the printers, just like Xerox does with industrial scale printers, and sell only the paper and toner. Charge by piece of paper used so there is a disincentive to print more than needed. Better yet, use print that disappears when paper is fed back into the printer, allowing paper to be recycled.

By the logic of the circular economy, you should recapture the ink in the printer, too, so that all valable parts are recycled: paper, ink, metal, plastic, screws, springs, plates, circuit boards, maybe even the information contained within the system.