Excerpted from "Beyond the Tragedy in Global Fisheries" by D. G. Webster, published by the MIT Press in 2015. Copyright Massachusetts Institute of Technology. All rights reserved.

The oceans are heavily overfished. There is some argument among scientists, observers and stakeholders over the degree of overfishing, but all agree that current practices are unsustainable.

Some barriers to sustainability are technical. Marine ecosystems are complex and changes in fish population dynamics are hard to predict, so it is difficult to know exactly how management measures will affect fish stocks. However, the greatest challenges in fisheries governance are economic and political.

The tragedy of the commons is important but insufficient as an explanation for fisheries overexploitation globally. The nature of the tragedy — indeed, the potential to avert or escalate overexploitation — depends on many other factors besides competition under open access. 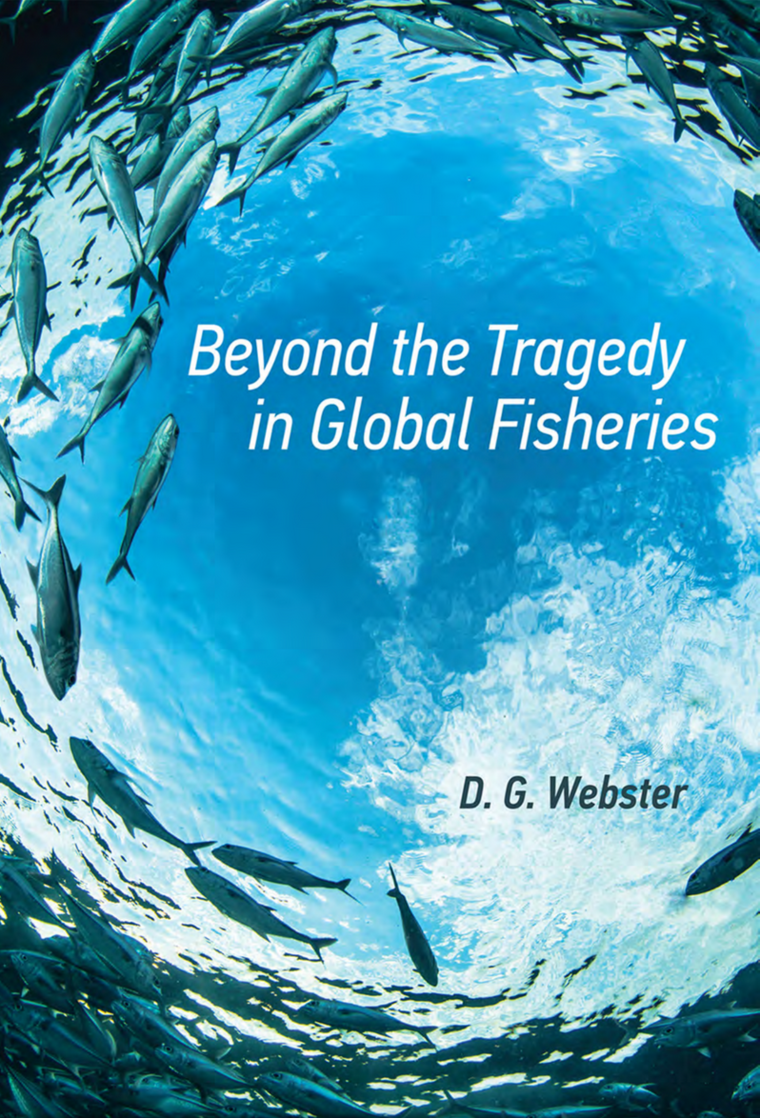 The wider the profit disconnect, the longer users can continue to profit while overexploiting the resource. In contrast, if the profit disconnect is stable or is shrinking, then economic recession will occur sooner, strengthening political will to improve management more quickly.

In reality, actors are seldom equal. Thus, the effects of the profit disconnect usually are filtered through political systems and can be skewed by political factors.

Indeed, a power disconnect occurs in responsive governance when the individuals or groups that experience the costs of overexploitation are politically marginalized. In such cases, the politically powerful segment of the industry continues to profit as a result of the lack of effective regulation, while others languish.

Because of the power disconnect, it is important to understand both the economic and the political structure of a fishery. Industry groups are economically heterogeneous and receive different problem signals depending on factors like the size of their operations, the availability of alternative sources of revenue, competitive pressures from other producers, consumer demand and marketing structures, as well as management policies and governance institutions.

In addition to varying in their levels of capture production, countries around the world vary in their volume of trade in fish products, in their consumption of fish and in the number of livelihoods supported by the fishing industry.

The distribution of power also affects the set of politically feasible solutions. Effective solutions are easier to implement when the costs are borne by marginalized populations.

This creates practical and normative tensions. Political empowerment is an important element of environmental justice and can increase the strength of problem signals; however, empowerment restricts the set of solutions available to decision makers.

Over the long run, responsive governance can produce several outcomes, but the management treadmill is most common. When relatively effective response occurs before biological collapse or ecological shifts, renewable resources may rebuild to sustainable levels.

As the problem signal dissipates, the political pressure to engage in management declines and a gradual return to overexploitation can be expected unless institutions are in place to prevent it.

An overview of global fisheries

The world’s fisheries are important social-ecological systems that provide food, jobs and economic development to many people. At the same time, fishing substantially alters inland and marine ecosystems in ways that can be difficult to understand.

Overfishing can deplete specific species, disrupt ecosystems and cause related socioeconomic losses as fishers struggle to adapt to declining harvests.

The value of this harvest was estimated at $217.5 billion. Fish are also an important source of foreign exchange in developing countries, surpassing many traditional cash crops such as coffee, cocoa and bananas.

About 86.5 percent of the 2010 harvest was destined for direct human consumption, amounting to 6.5 percent of the world’s consumption of protein from both animal and plant sources as cosmetics and pharmaceuticals as well as for industrial and agricultural uses such as animal feed, silage, fertilizer and landfill.

Approximately 54.8 million people earned a living as fishers or fish farmers in 2010; ancillary jobs in areas such as fish processing and distribution, production or maintenance of boats, gear and other supplies, and research and development, supported between 660 million and 820 million people. 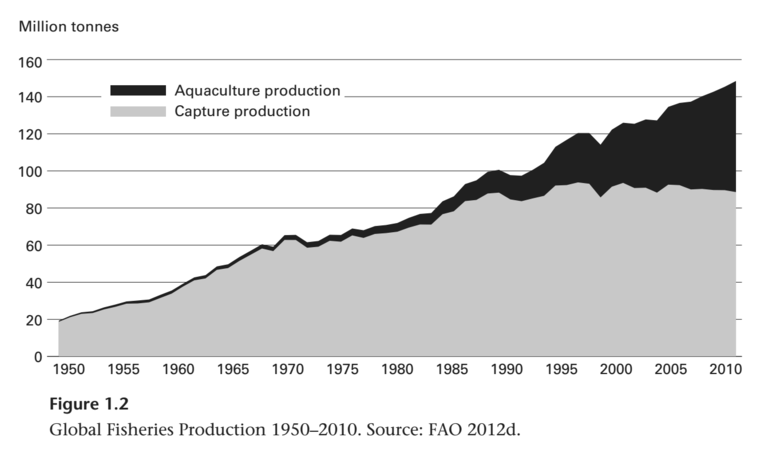 Capture production is the harvesting of wild species of aquatic organisms, including many species of fish but also aquatic plants, mollusks, crustaceans and mammals.

At the species level, the composition of landings has changed considerably over the last 60 years.

Now, the top three species are anchoveta (Peruvian anchovy), Alaska pollock and skipjack tuna. Together those species made up only 10 percent of total landings in 2010. Atlantic herring is the fourth-largest component of landings and Atlantic cod comes in 10th.

In fact, the top 10 species in 2010, which included chub mackerel, European pilchard, Japanese anchovy, yellowfin tuna and the aptly named largehead hairtail, made up only 21.5 percent of the total harvest, even though landings of these species are about five times as large as the combined landings of Atlantic herring and cod in 1950.

Annual harvests of most of the top 10 species exceed 1 million tons.

Even if corrected for by-catch, the FAO data still would underestimate total production because they record only reported landings, and therefore do not include harvests by fleets from countries with limited data-collection capacity or production by illegal, unreported and unregulated (IUU) fleets, which fish in contravention of international and domestic regulations.

At the local level, fish consumption depends on geographic and cultural factors, as well as income and access to transportation. In general, people who live in coastal communities are often heavily dependent on fish as a primary source of nourishment, and people who live inland consume less fish.

As might be expected from these levels of consumption and these variations in production, trade in fisheries products is also distributed unevenly around the world.

Furthermore, the fishing industry has many sectors, including boat builders and gear manufacturers, the fishers themselves, fish-processing corporations, product marketers, importers, exporters, wholesalers and retail distributers of fisheries products. All these sectors provide livelihoods for their workers.

The economic benefits of fishing are not evenly distributed across these groups, and conflicts often arise among segments of the industry because each has different interests.

Concern about the sustainability of marine fish stocks and ecosystems is increasing. Perceptions regarding the current state and future potential of marine fisheries depend on beliefs regarding both human and natural systems.

There are multiple perspectives on what constitutes a healthy fishery or what is acceptable as effective fisheries management. In this subsection, I will review assessments of effectiveness based on three primary management standards from the fisheries literature: the single-stock maximum sustainable yield (MSY) benchmark; fisheries-centric ecosystem approaches; and ecosystem-focused approaches to management.

The U.N.’s Food and Agriculture Organization began assessing the state of the world’s marine commercial fish stocks in 1974. Figure 1.6 shows changes in the level of overexploitation since that time. 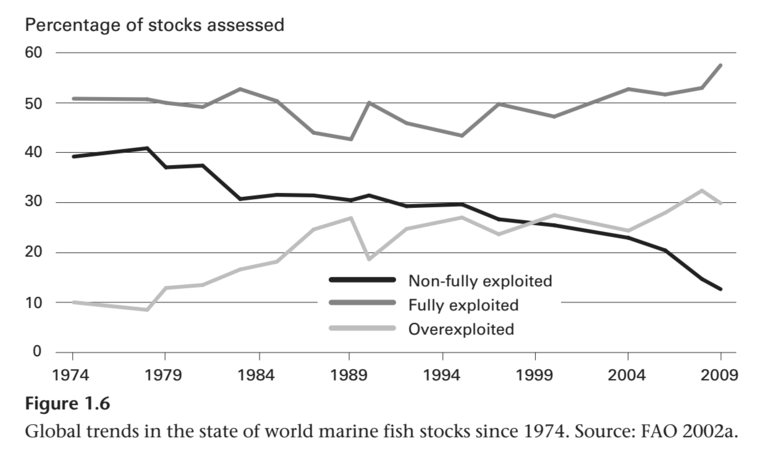 From these estimates it appears that overexploitation of marine fisheries is increasing around the world, but at a decreasing rate — particularly for overexploited stocks.

While accepting that ecological risks are present, fisheries-centric authors assert that most of the worst stock collapses are not caused by single-stock MSY-based management per se. Instead, they blame insufficient management for fishery failures.

From a fisheries-centric perspective, this means that technical solutions to the management problem are already sufficient, but that political and economic factors prevent effective implementation.

In contrast, proponents of the ecosystem-focused perspective paint a much bleaker picture of the current state of fisheries resources. Indeed, some scientists and conservationists believe that world fisheries are on the brink of collapse.

They argue that drastic reductions in fishing mortality and extensive efforts to restore habitats are necessary to prevent ecosystem collapse around the world. Because they focus on the potential for catastrophic and irreversible shifts in ecosystems caused by trophic cascades and other complex feedback processes, these authors are risk averse and highly sensitive to the ecological repercussions of fishing.

This makes sense from an ecological perspective; however, it can be counterproductive politically, as short-term costs often ignite fishers’ opposition to management.

However, because all sides agree that action needs to be taken sooner rather than later, it makes sense to focus on finding ways to remove political roadblocks to each type of management.

This does not mean that fishers’ voices should be excluded from political processes or that the industry should be marginalized. In fact, quite the opposite is true. Without industry acceptance, management tends to fail spectacularly.

Yet there are ways to reduce political opposition to management without excluding key participants. The historical record shows that a number of switching mechanisms precipitate transition from a downward spiral of depletion under ineffective management to an upward cycle of rebuilding under effective management.