What’s the right balance of energy, security and sustainability?

The challenge for policymakers is not only to decarbonize energy systems, it is to do so while simultaneously ensuring the security and affordability of energy.

An energy transition is unfolding around the world. In efforts to reduce carbon dioxide emissions and air pollution, governments are installing increasing amounts of wind and solar. Since 2000, renewable installations in the power sector have risen from 20 GW per year to around 160 GW per year and account for almost two-thirds of new generation capacity.

But the challenge for policymakers is not only to decarbonize energy systems, it is to do so while simultaneously ensuring the security and affordability of energy. Should either goal be seriously compromised, the economic, social and political ramifications may be severe.

The World Energy Trilemma 2019 examines the progress governments have made in the continual struggle to balance the critical policy objectives of security, equity and sustainability. By objectively measuring individual countries’ performance on each since 2000, it provides a unique insight into policymakers’ achievements and failures.

The overall picture is one of progress. Out of 128 countries assessed, fewer than 10 have seen their aggregate score across the three dimensions decline since 2000. Progress is also accelerating. Between 2000 and 2004, only 11 countries managed to improve their aggregate score; from 2015 to 2019, this number rose to 31.

Although progress has been widespread, it has not always been even or consistent. No country has managed to achieve continuous improvement in each dimension. All countries have experienced setbacks in one or more dimensions at some point, illustrating the challenge of balancing three distinct policy objectives that do not always align. Trade-offs are sometimes unavoidable.

The top three performers on security are Sweden, Denmark and Finland. The high energy security of the Nordic countries comes from their diverse energy systems, achieved by early and sustained investments in renewables and reduced reliance on fossil fuels (see chart below). In doing so, the Nordic countries simultaneously have improved the security and sustainability of their energy systems. In addition to being the top performers on security, Sweden, Denmark and Finland all receive the highest grading on sustainability. 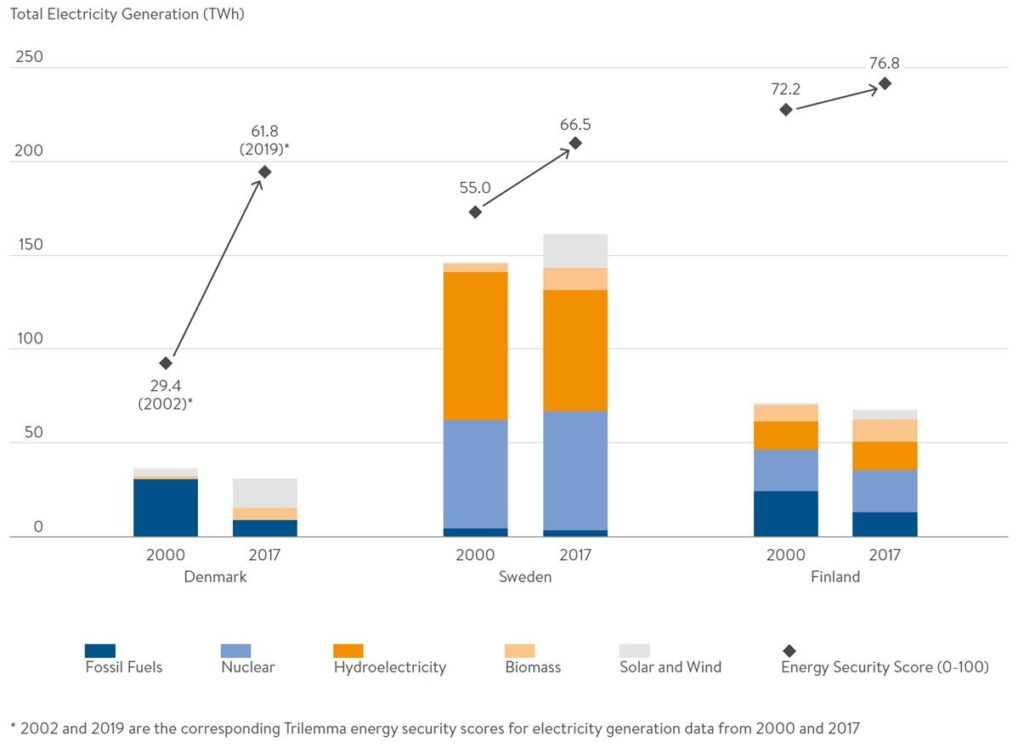 The rest of the security top 10 is overwhelmingly European, reflecting the security benefits realized by integrated governance arrangements, including stable regulatory and market frameworks and stockholding obligations.

Hydrocarbon-rich Gulf countries dominate the top performers on affordability and accessibility of energy. Their populations enjoy access to some of the cheapest energy in the world due to generous subsidies that keep domestic energy prices low. This has come at a price to overall trilemma performance, however.

Cheap energy does not encourage efficiency, and inefficient burning of fossil fuels means the Gulf countries are among the worst performers on sustainability. A number also have seen deterioration in their security scores, as their reliance on fossil fuels has increased. The future trilemma performance of the Gulf countries, therefore, will depend heavily on current efforts to reduce energy subsidies and promote renewable energy. Success will allow them to diversify their energy systems, increase efficiency and reduce emissions intensity.

Outside the Gulf, small wealthy countries with geographically concentrated populations such as Luxembourg, Singapore and the Netherlands perform well. But the real story is in parts of Asia and Africa, which have witnessed remarkable improvements in energy access and affordability as incomes have risen and investments in electrification have taken effect.

The fastest improvers since 2000 include Cambodia, Nepal, Bangladesh, Myanmar, Ethiopia and Kenya. While equity scores — measuring a population’s access to affordable energy — for the top performing countries have remained relatively flat, scores among this group of countries have soared, driving a number of them into the top 10 improvers across all three dimensions. This progress is a testament to the success of efforts to deliver Sustainable Development Goal 7: to ensure access to affordable, reliable, sustainable and modern energy for all.

However, the energy transition is not confined to Europe, and some of the most rapid progress on sustainability has occurred elsewhere. Notable within the top 10 improvers are the world’s two largest greenhouse gas emitters: China (fifth) and the United States (ninth). Both have invested significantly in renewable energy technologies, and the United States also has benefited as shale gas has displaced coal on its grid. Although coal remains a significant source of energy in China, clean energy has expanded significantly, and the country persistently has topped renewable investment tables in recent years.

Of the three dimensions of the trilemma, the sustainability dimension has shown the most marked improvement at the global level, reflecting the increasing focus on energy sector decarbonization.

The 2019 World Energy Trilemma reveals much to celebrate. Access to affordable energy is increasing rapidly, and energy sectors are decarbonizing. More countries are managing to balance the trilemma and achieve progress across the three dimensions. Despite this progress, the world remains way off track to meet its climate goals.

Achieving the Paris Agreement’s objective of limiting temperature increases to well below 2 degrees Celsius requires that net global greenhouse gas emissions peak in the next few years and decline to zero early in the second half of the century.

This means the global energy transition must be complete within the next 30 to 40 years. However, global emissions are still rising, and although renewables are ramping up, it is from a small base, and we are burning more fossil fuels than ever before (see chart below). 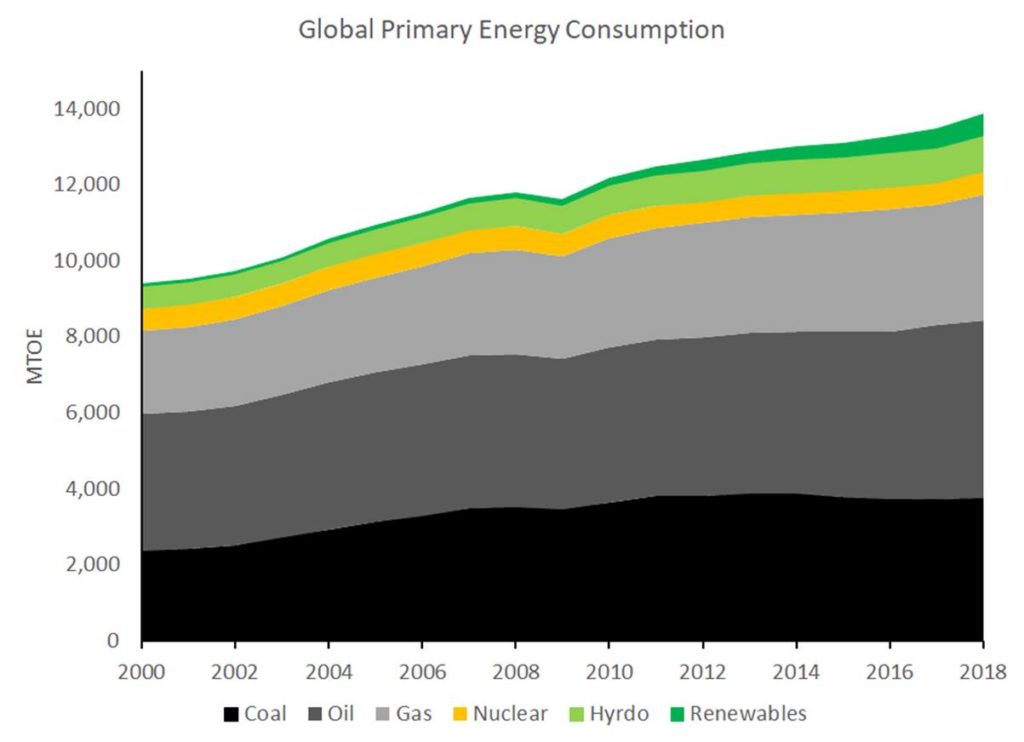 In short, progress on energy sustainability needs to increase dramatically.

Policymakers can take heart from the previous 20 years, which show that decarbonization has not undermined progress on security and affordability of energy. But they face new challenges as the energy transition accelerates. How will power sectors cope with saturating levels of intermittent renewables and increasing demand from electric vehicles? Will the countries that have displayed remarkable progress on improving access to energy be able to maintain that progress without increasing their dependency on fossil fuels? How will energy security evolve in a future of increasing electrification, more extreme weather and heightened cyber threats?

The next 20 years of the energy trilemma will not look like the last.