The words we use most frequently to describe the climate problem may be the least impactful, according to new research. At least one big media company already is taking action.

I’m a word guy, if you hadn’t noticed. I love learning new words, turning old ones inside-out to use them in new ways — and, of course, engaging in wordplay, from puns to double entendres to other forms of linguistic gymnastics. I can’t help it; it’s just how I’m wired. Words matter, to be sure, but they also can be sport.

In the world of sustainability, that "sport" can be deadly serious. The words we use to describe and define the things that matter — to us and to the planet — need to be precise and well understood. If we’re not aligned on language, there’s little hope that we’ll be able to align on tackling the challenges we face.

Case in point: This month, we’re holding three meetings of our GreenBiz Executive Network — GBEN, as we call it — our peer-to-peer membership group of sustainability executives from big companies. (We hold three meetings each in January, May and September, each with about 20-25 companies in the room.)

During one part of this month’s meetings, we’ve been asking members, whose companies span everything from airlines and railroads to consumer brands and tech companies, how certain terms resonate in their organizations. (We've only held two of the three May meetings so far; the third is this week, in Chicago.)

The words we use to describe and define the things that matter — to us and to the planet — need to be precise and well understood.

This is not without self-interest. This year, we’re launching VERGE Carbon, one of four concurrent conferences that will be part of our VERGE 19 event in October. The focus of VERGE Carbon is "carbon removal" —  the act of drawing down greenhouse gases already emitted into the atmosphere and using them to enhance agriculture, create new products and materials, produce energy and other activities that turn polluting liabilities into profitable assets.

So, we've been asking our GBEN members, who serve as an informal brain trust, whether the term "carbon removal" resonated with them and their companies. It didn’t. They don’t use the term and didn’t see it as being useful in their companies or their work.

Same deal with "energy resilience" — the idea of energy systems that can adapt to natural disasters and other disruptions — which is core to VERGE Energy. With few exceptions, that term was similarly a head-scratcher for GBEN members.

Getting the words right can be difficult. When it came to "carbon removal," for example, there was little consensus about a better term, and more than a little confusion.

For example, if a company sequesters more carbon dioxide than it emits, is it "carbon negative" or "carbon positive"? Both terms make some intuitive sense, and companies wouldn't be wrong if they used either term. Or are there other words that better articulate the outcome of company activities that contribute to reversing climate change? A few GBEN members warmed to "drawdown," because it seemed values-neutral and was sufficiently descriptive of the problem and solution at hand.

For now, the jury is out.

It’s not merely a matter of being scientifically accurate. Picking the right words is key to framing a topic, which in turn helps determine how people respond to it: Do they understand the term? How does it affect them, both intellectually and emotionally? Will certain words or terms be more engaging — or turn people off?

So, for example, what should we call the phenomenon in which greenhouse gases trapped in the atmosphere are altering the climate? "Climate change"? "Global warming"? "The climate crisis"? Something else entirely? So far, there’s no consensus.

Consider: Last week, the U.K.-based Guardian announced that it had updated its style guide — the writing, editing and usage conventions to which it hews across its editorial properties — "to introduce terms that more accurately describe the environmental crises facing the world":

Instead of "climate change" the preferred terms are "climate emergency, crisis or breakdown" and "global heating" is favoured over "global warming," although the original terms are not banned.

"We want to ensure that we are being scientifically precise, while also communicating clearly with readers on this very important issue," explained Guardian editor-in-chief Katharine Viner. "The phrase ‘climate change,’ for example, sounds rather passive and gentle when what scientists are talking about is a catastrophe for humanity."

True that. For many people, "the climate is always changing," so what's the big deal? As for "global warming," that may be a positive outcome for those in some northern climes.

The Guardian is onto something. A New York-based firm, SPARK Neuro, "a neuroanalytics company that measures emotion and attention to optimize advertising and entertainment," recently conducted a neuroscience study that pitted 120 Democrats, Republicans and Independents in the United States against six politically charged terms for — well, let’s call it "climate change."

The company set out to find out "if it’s time to rebrand climate change, using down-to-the-millisecond electroencephalography (EEG) and galvanic skin response (GSR) recordings taken as voters of each political affiliation listened to audio recordings of controversial statements." The EEG and GSR responses were distilled into a quantitative neurological measure of emotional intensity. The company says that the same algorithm successfully predicted the results of the 2016 U.S. presidential election.

Their finding: "Global warming" and "climate change," the most commonly used monikers in political discourse, elicited the weakest emotional reactions from both Republicans and Democrats. Meanwhile, the top two terms, "climate crisis" and "environmental destruction," evoked nearly identical net intensity across all 120 participants, although the latter term’s high average "was propped up by a disproportionately strong response from Republicans." 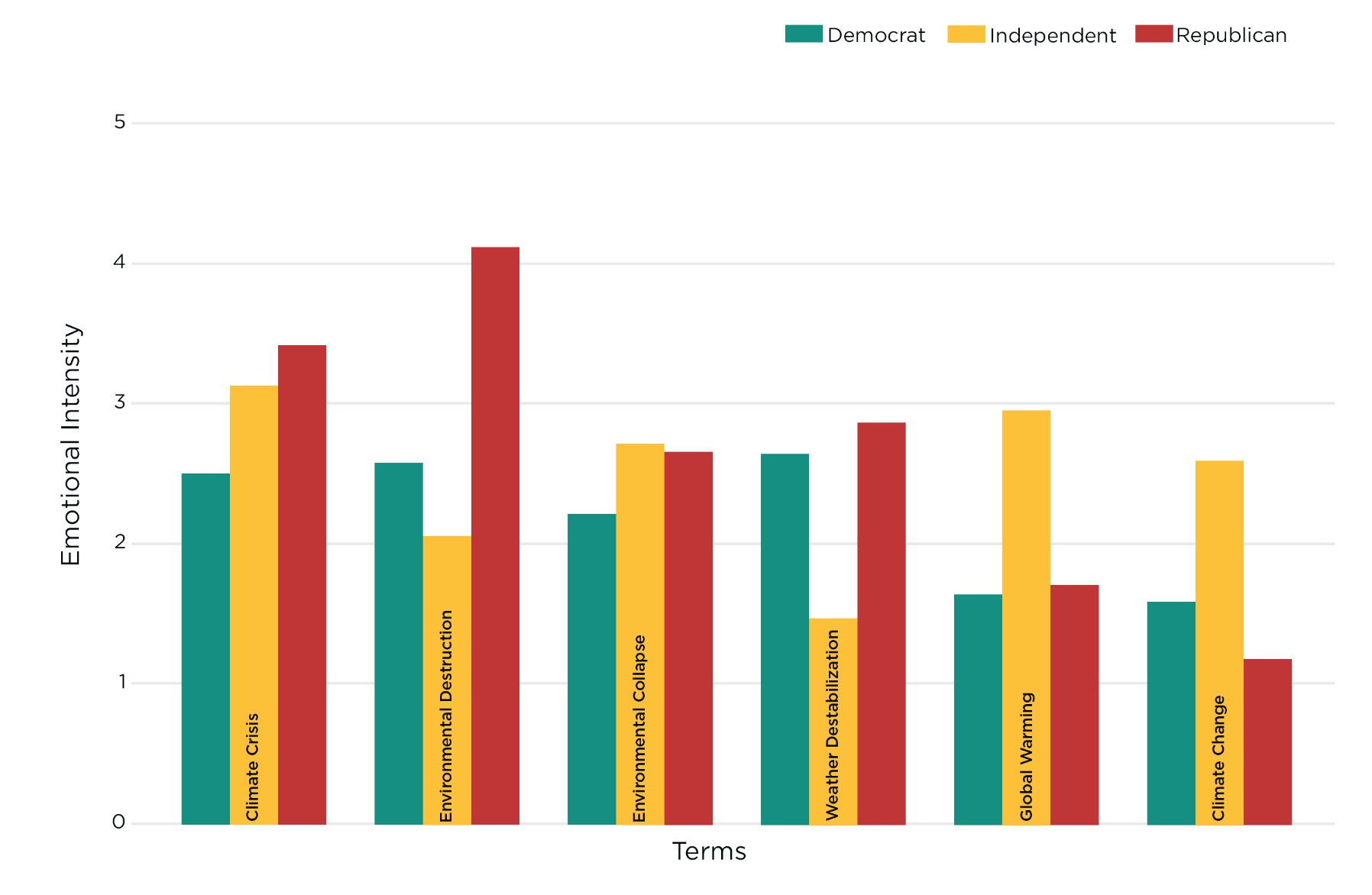 It's unclear why Republicans found that term compelling. Suffice to say, "environmental destruction" can include a much broader range of issues than the climate — air and water pollution, biodiversity loss, land degradation and much more. But it’s hard to argue with how people react, even if you find their reaction puzzling, or downright wrong.

The extreme response we saw among Republicans to the term "environmental destruction" raised a red flag in comparison with terms like "climate crisis," which performed well across all three political affiliations.

Though we might infer that language with higher emotional intensity is at least potentially more impactful, when it comes to winning over the third of Americans who don’t consider climate change a serious problem, words like destruction may go too far. However, "climate crisis" could strike a bipartisan chord as a more reasonable observation.

Clearly, we haven’t yet succeeded in adequately communicating the climate crisis to the general public, let alone countering those who profit from sowing doubt that there even is a problem.

So, what’ll it be: "climate change," "global warming," "climate crisis," "climate breakdown," "global heating," "environmental destruction" or something else entirely?

It’s unlikely we’ll ever get universal consensus on this question, let alone on the many other concepts and terms we deal with on a daily basis. Inevitably, most of us will fall back on words and terms we are used to, or that our peers or stakeholders use and understand. And we’ll get through the day grappling with language that we all acknowledge is inadequate.

But falling back on comfortably familiar words and phrases might not be the best strategy.