What's the scenario? 5 ways to greet the new age of climate-related disclosure

Corporate sustainability teams long have sought ways to more closely connect their objectives with the core missions of their companies — and to discuss them externally in those terms. And to many, the G20’s 10-month-old recommendations for discussing risks and opportunities related to climate change as part of traditional financial disclosures — like the 10-K report required by the U.S. Securities and Exchange Commission — represent a fresh opportunity to do just that.

"Those of us in sustainability have tried to speak to the CFO’s office, and we were speaking two different languages. This is a bridge arcing toward that," said Curtis Ravenel, global head of Sustainable Business & Finance for Bloomberg, referring to the guidelines issued last summer by the Financial Stability Board Task Force on Climate-related Financial Disclosures (TCFD).

Figuring out exactly what to say — after all, TCFD-shaped disclosures are voluntary for now — could inspire a new approach to business-scenario analysis that forces far tighter collaboration between sustainability teams, risk managers, legal departments, business planners and other mission-critical operational functions than has been the norm. "The idea is not to overprescribe," Ravenel said. "This is just prudent planning."

Be skeptical of futures that look like the past.

More than 275 companies, so far, have committed to supporting this evolution. And Ravenel hopes that number will swell to 500 by September.

Investors are already asking for this information, said Val Smith, managing director and global head of corporate sustainability for banking giant Citi. "In a way, TCFD is the same, but it’s different because this is coming from regulators," she said. "They had been barely been released before we had a request about them."

Rather than viewing this as an onerous task, many risk managers are intrigued about the opportunity to better accommodate factors such as extreme weather or the rapid adoption of electric vehicles and clean energy in their models for the future, according to experts at a TCFD planning conference this week in New York at the Bloomberg headquarters. 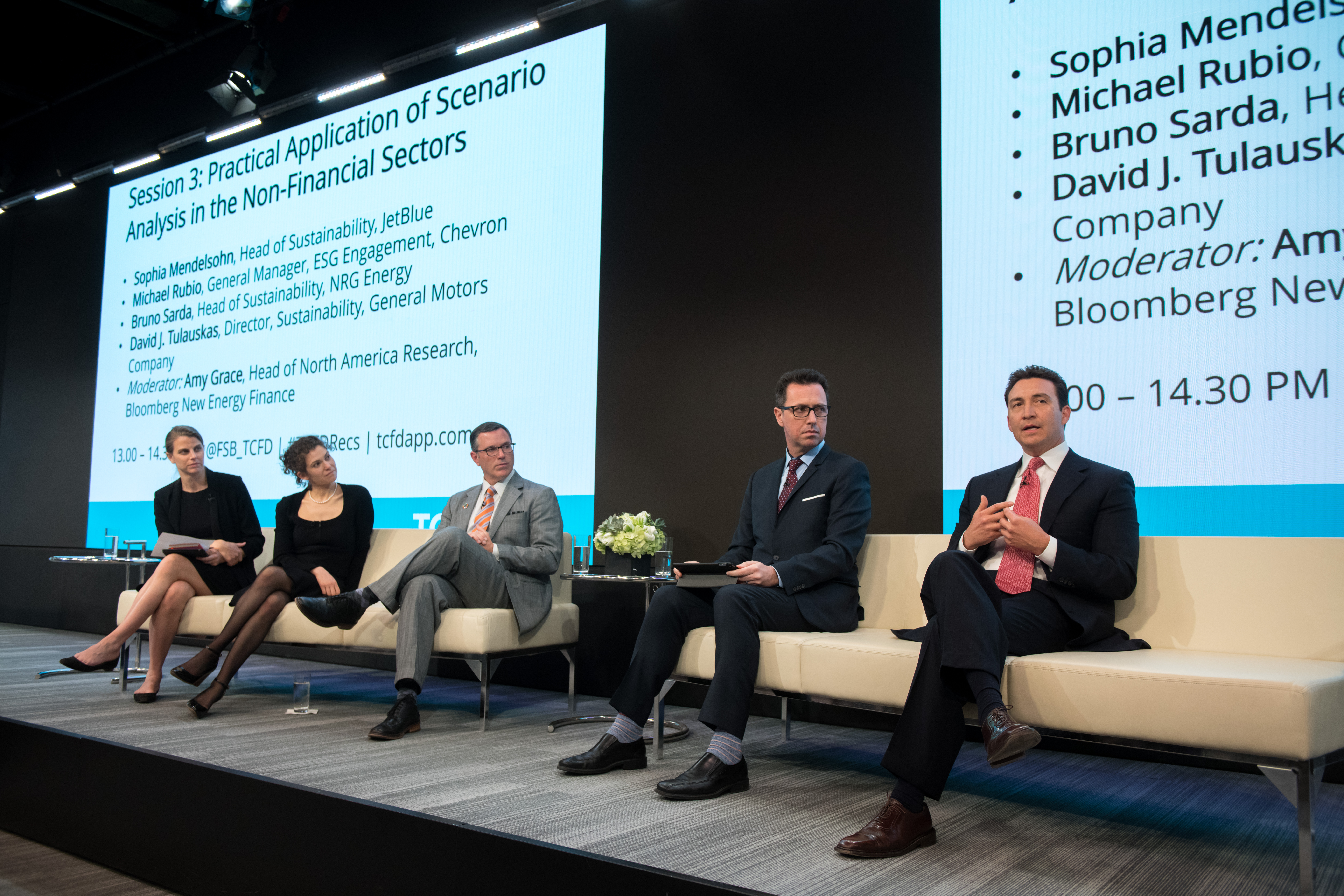 The site of the summit this week was deliberate. Not only was former mayor and United Nations Special Envoy Michael Bloomberg a vocal champion of the TCFD recommendations and the push for a disclosure approach that’s more meaningful for investors, the Bloomberg organization is working on a number of resources to aid companies in building their scenarios.

Those include a new data visualization service using Bloomberg MAPS (coming soon) that would allow companies to overlay data such as flood risks and power plant locations in order to assess the viability of investment proposals or existing assets.

More immediate, the media organization launched a website called the TCFD Knowledge Hub, which aggregates more than 350 white papers, tools and other educational resources. Among them is the U.N. guide for banks released just last week by the U.N. Environment Finance Initiative.

Practical suggestions for how to approach scenario analysis dominated the sessions at the TCFD event. Here are five meta-themes that emerged during the discussions.

1. Companies should use multiple scenarios and keep them updated

Governments and the corporate sector could follow many potential "paths" of action to help the world collectively reach the future dreamed by the Paris Agreement —  in which global temperature increases are limited to 2 degrees Celsius.

Here are some of the bigger questions: When will emissions really peak? When will demand for oil start declining? How much might governments pay to prop up sovereign investments? Will materials shortages limit the potential of emerging battery technologies? Will the United States really pull out of the Paris Agreement? How could a price on carbon change the economics of certain business units?

There are clearly also many technologies that will play a role, including solar and wind generating resources, electric vehicles and carbon capture and storage (CCS).

It’s the job of scenario planners to consider how the answers to all of the above could affect their organization both as risks ("Will it cost my company millions or billions more ensure all the natural gas power plants in its portfolio?") and as opportunities ("Can I carve out an entirely new business by funding CCS projects?")

How many scenarios should your team develop? The speakers at this week’s event suggested that companies should consider at least three or four, and that this should be an ongoing process as variables change. An insurance company, for example, might consider the impact of an "uninsurable" world in which the warming trend continues along current growth trajectories resulting in a world where temperatures rise by 4 degrees or even 6 degrees Celsius.

"There is more analysis required than we expected," said Citi’s Smith. Even within the bank’s 2-degree scenarios it is considering multiple options, she said, and it has pushed the envelope by exploring both the risks and opportunities of an even more aggressive transition in which temperature increases are mitigated to rise of just 1.5 degrees Celsius. Her team is still grappling with which elements to consider material, something that investors have begun clamoring for.

2. It's critical to engage diverse points of view

Scenario planners need to be both thoughtful and imaginative in the market forecasts they use to guide their thinking, said Nathaniel Bullard, global head of executive insights for Bloomberg New Energy Finance. "Be skeptical of futures that look like the past," he said. And be thoughtful about which forecasts are used as the guidepost. If they’re historically fraught with inaccuracies, the scenarios you build on them might be as credible to the investors demanding this information.

Peter Schwartz, senior vice president for strategic planning at Salesforce and an expert in the concepts of scenario analysis, offered the example of IBM’s expectations for the personal computer as it prepared for the launch of the original IBM PC. It relied mostly on the views of insiders who had grown up in the mainframe world. Basically, they blew it.

"The biggest mistake in scenario planning is a lack of diversity, otherwise you’re just talking to yourself," he said. "The most important thing is to make sure you have a diverse team to challenge your mental map."

3. It's your mission to prepare for the future, not predict it

The scenarios imagined by your organization need to be plausible, but it’s not a planning team’s job to predict. Rather, they need to spell out possible outcomes for your company and what actions are being taken to prepare, according to the conference attendees.

Investors will be less forgiving if you don’t seem to have a plan.

"The test of a good scenario is not whether you were right or wrong; it’s whether or not you are able to act in a timely way," Schwartz said. It’s about "better acts, better decisions, better understanding, not better predictions."

Some of the earliest scenarios — many published by oil and gas companies — are missing the mark in this regard, said Leonardo Martinez-Diaz, global director of the Sustainable Finance Center for World Resources Institute. "As we read these analyses, what is still missing broadly is what it actually means for your model and how are you planning?" he said. "Investors will be less forgiving if you don’t seem to have a plan."

4. The research used to set science-based targets could be useful

Is your company setting science-based targets for carbon emissions reductions, water conservation, waste management and other corporate sustainability strategies? If so, it might consider leveraging that work into its scenario planning exercises, suggested David Tulauskas, director of sustainability for General Motors, which is just starting the workshops that will support its scenario analysis.

"Thinking about science-based targets is a safe environment to really explore innovative approaches," he said. "It forces you to think about new innovations and think about different perspectives. … Scenario analysis is a way to think outside in."

5. Don't overemphasize the risks and downplay the opportunities

As of late April, JetBlue became one of the first U.S. companies (and certainly the first aviation business) to actually use the TCFD recommendations — alongside the framework suggested by the Sustainability Accounting Standards Board — in an actual report. "The investor pressure was what broke the cycle," said Sophia Mendelsohn, head of sustainability for JetBlue. The company has "engaged" with eight out of its top 10 investors on this issue, she said.

It didn’t take a huge leap to get there: Mendelsohn said the cross-disciplined team behind this effort started with work already being done by the company’s risk managers and added climate as another variable in the equations. For example, what might increasingly warm temperatures mean when it comes to extreme weather events or how much might the physics of consistently hotter air affect flight schedules on a permanent basis.

"This is just about the business we are operating, the risk it is facing, and how we will protect it," she said, cautioning others in her position not to ignore the opportunities that might arise by being ahead of the curve.

Danielle Sugarman, vice president of investment stewardship at institutional investor BlackRock, said her team has reached out to the largest corporate emitters in its portfolio to inquire how they’re preparing for the new era of disclosure.

"There is more acceptance that this is a direction of travel,” she said, while reiterating the proclamation early this year by her CEO, Larry Fink, that it’s no longer possible for companies to ignore their impact on the planet. BlackRock’s mission is to ascertain which companies are paying attention, and which are not. "At the end of the day, what we want to see is that companies are being nimble," Sugarman said.