VERGE Accelerate winners: Where are they now?

With less than two weeks until VERGE 2015 and its very popular Accelerate pitch sessions where startups in the sustainability space tell their stories and compete before a panel of VCs and the VERGE audience, we thought we'd see what's new with past Accelerate winners.

The life of a startup is typically like a roller coaster ride — lots of twists and breathtaking highs and lows — causing founders to experience both demoralization and exaltation.

Tomorrow, several of London’s public spaces will sport a new kind of public bench — one that doubles as a solar-powered charging station for pedestrians and mobile professionals toting smart phones and lap tops.

The solar charging public bench, made of polished wood and shaded by a slight metal canopy that holds a solar panel, was invented and produced by Strawberry Energy a Belgrade start up with a vision and passion for smart sustainable cities.

A year ago, Strawberry Energy pitched its vision for solar-powered public furniture to VERGE Accelerate. The owners’ passion for sustainable cities and the practicality of a product for which there was immediate demand won the most votes from the Accelerate audience. 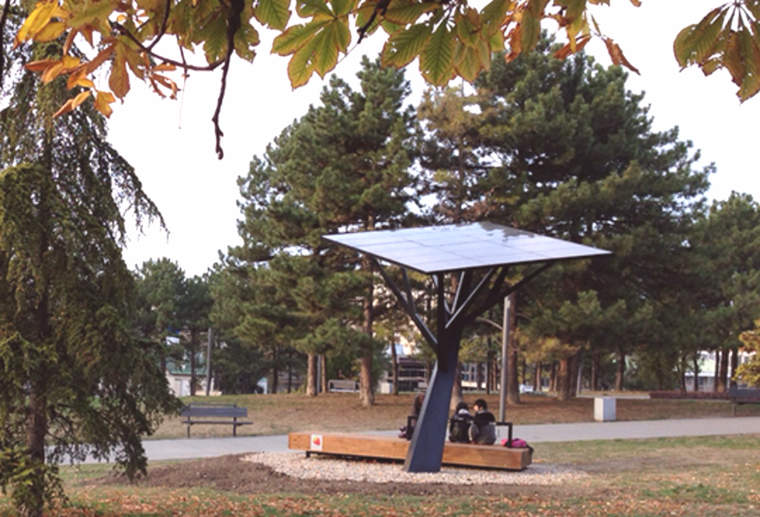 But the standalone bench wasn’t even part of the pitch — or the product line up back then.

The company pitched a Strawberry Tree, a public meeting space and charging station built as a "tree," or metal structure with a canopy holding solar panels and benches attached underneath, with enough seats for 16 people. It is designed for people to congregate in public parks and campuses and charge their phones while meeting.

A lot happens in a year in the life of a start up – pivots, new products, new directions, new cash.

“In the last year, we entered 3 new countries Slovakia, Bulgaria and Croatia, and also we are now entering the UK installing our first benches in public spaces,” said Milos Milisavljevic, Strawberry Energy's founder and CEO.

The start up is now in 11 cities in Eastern Europe plus London.

“We have doubled our presence,” he said, “and added new services making the furniture more energy efficient and easy to install."

The bench idea came from a desire to move more quickly and get solar furniture into urban spaces without obstacles that comes with seeking permits and such. 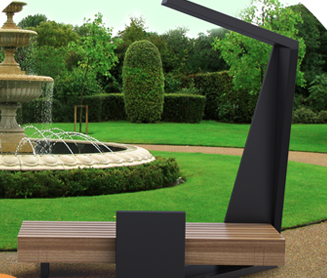 “We are trying to make a new generation of smart sit furniture as easy to install and retrofit as possible,” Milisavljevic,  said. “One of the problems with the Strawberry Tree is it required a bit of construction work, to get the concrete foundation, so a day’s work and you need permits,” he said. The bench doesn’t need any of that.

“So, we developed Strawberry bench, it’s smaller and easier to install in any given city in any location without digging,”  he said. And its first deployment is London — which Milisavljevic described as “very good because London is really looking at the smart cities approach. We see a lot of potential for smart street furniture across London.”

Second place winner in VERGE Accelerate 2014 was Primo Wind, a San Diego based startup that builds small wind turbines — micro turbines — that can be deployed on buildings to provide that building with a kilowatt or two of renewable energy without taking up a lot of space, hurting wildlife or causing lots of noise. 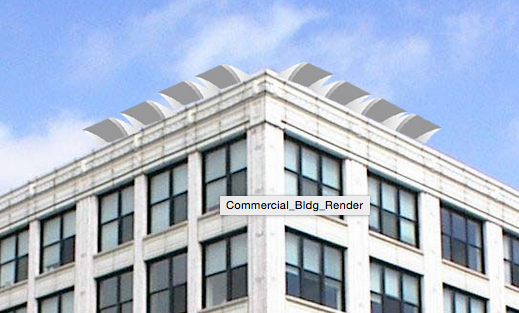 The San Diego firm with NASA scientists on staff has a strong pilot going with Silicon Valley firm Intuit.  But it decided to simultaneously go back to its R&D lab to perfect its technology before trying to shift to full production mode.

“Our goal is to produce as much power with as small a footprint as possible,” said Ned McMahon, its CEO in an interview last week with GreenBiz.  It tried “dozens of prototypes," changing the size and shape of the wind blade, the number of blades, and finally the rotor, McMahon said.  It tweaked the technology in the rotor and now it's on the cusp of full production, finalizing on a design.

“We are moving from R&D into production, and soon will start delivering product around the first of the year.”

Now it has a pilot going on with the U.S. Navy Artic Reserve station, a continued pilot with Intuit Corp. and lots of interest and pending orders.

“What we saw at VERGE helped us persevere. We felt like more things were possible,” encouraged by the entrepreneurial spirit of San Francisco and VERGE, he said.

In this month's VERGE in San Jose Oct. 26 to 29, Primo Wind turbines will be part of the Microgrid that is supplying power to operate the entire VERGE Conference

Votes for the best pitches came down to a dramatic near tie for second place last year after the 15 start-ups each gave their two-and-a-half minute pitches and the votes rolled in.

PK Clean, which has a technology for recycling plastic into crude oil at a scalable price, and OhmConnect, which developed an app that let’s users earn money by reducing electricity use, each came close to Primo Wind in garnering Accelerate votes, but the micro- wind turbine maker squeezed out ahead.

PK Clean was a popular choice of many Accelerate listeners and judges.

The Salt Lake City-based company tackles one of the most vexing problems on the planet — what to do with all the plastic waste we generate in our consuming life that winds up in landfill.

It was founded by Massachusetts Institute of Technology MBA graduate Priyanka Bakaya, who developed a process to convert plastic to low-sulfur fuel in a low cost, scalable way.

By honing the process to be low cost is PK Clean's distinction. The technology to convert plastic back to oil has been around for a few years but has not been cost effective enough to attract a market. As a result, only about 9 percent of plastic is recycled while the rest goes to landfills — where it never decomposes and often blows into the oceans instead, creating the biggest source of ocean pollution.

PK Clean’s technology, based on a process called catalytic depolymerization, uses heat and a catalyst to bread down plastics into a low sulfur crude oil which the landfill can sell to refineries. They install the processing on location, which eliminates the need for expensive transport of trash.

PK Clean so far has one big customer — Salt Lake City, Utah.  The company relocated from Boston to Salt Lake City so it could set up its first commercial scale facility for converting the plastic in Salt Lake City’s landfills into crude oil.

Bakaya and PK Clean have won 12 awards for her technology, including winning MIT’s Clean 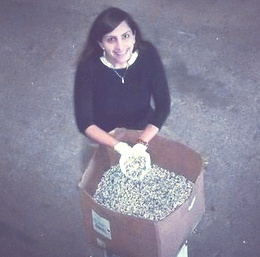 “The most harmful type of waste is plastics — not only does it take up the most volume, but it never decomposes.  PK Clean solves the problem of plastic waste entering landfills, by turning it into fuel,” Bakaya said on a recent TED talk.

She said PK Clean's process results in a high-energy payback and zero toxic emissions for the landfill customer. The low-sulfur fuel it produces is cleaner than regular fuel.

Much has happened in the automotive industry around sustainability in the two years since XL Hybrids pitched its ideas before VERGE Accelerate.  With the rise of Tesla and the rush by other automakers to produce and market viable electric vehicles or hybrids, there’s been a mind-shift in transportation: There’s consensus that we will not be continuing using gasoline-powered vehicles for long.

At the same time, mass transit and fleets are also transitioning to either electric or natural gas, with electric powered bus maker Proterra, a new darling of Silicon Valley.

Into this mix, XL Hybrids has an increasingly interesting value proposition.  The Massachusetts-based startup produces an electric power drive that can be installed into many models of existing gasoline-powered vehicles, replacing the old engines.  Its XL hybrid electric drive system lowers emissions by 20 percent and reduces fuel use through regenerative braking. What happens is the electric motor helps slow the vehicle when the driver brakes, charging the battery. When the driver accelerates, the battery releases the energy to the electric motor, helping propel the vehicle.

Since few fleet operators replace their entire fleet of vehicles at one time but rather replace a certain percent of vehicles each year, XL Hybrid provides a low cost and viable way to switch to low emissions, renewably powered vehicles, a retrofit of roughly $8,000 a truck.

In two years, XL Hybrid has gained a lot of customers, the most recent being the City of Boston and Montgomery County, Maryland each of which bought roughly a dozen electric drive systems. 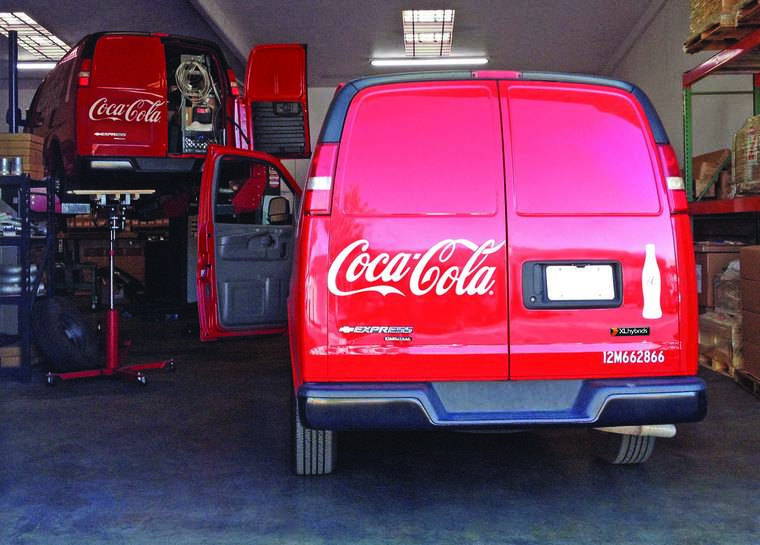 A Coca-Cola Co. truck being retrofited with a XL Hybrid power drive.

Hard to know whether it’s about being in the right place at the right time or if a startup just has the absolute right product, but things are surely looking good for XL Hybrid in terms of growth.

In an email response to the question of how have things chanced since 2013, co-founder and vice president Clay Siegert said “Since 2013, XL Hybrids has focused on the needs of fleets in key industries that will benefit most from the hybrid electric technology, such as delivery and service staff and shuttle service for corporations, municipalities, universities and nonprofit organizations,” and that focus has helped it grow.

“That’s the reason for the rapid expansion into multiple platforms for class 2 through 4 fleet vehicles. This strategy has attracted the attention of new clients and repeat customers with The Coca-Cola Company, PepsiCo, Montgomery County and others returning for additional XL3 Hybrid systems for their fleets,” he said.

The company calculates estimates that fleets retrofited with its HL Hybrid power drives drive a collective 1 million miles a month.

What’s that mean for sustainability?  Asked, they said “the equivalent of removing 380 passenger cars from the road or sequestering the same amount of carbon as achieved by 1,460 acres of forest."

Mosaic is a solar financier that brought solar to the people.  It joined two emerging trends – crowd financing kickstarter style and the desire of more and more people and institutions to go solar.

When it emerged on the scene in 2011, people who passionately believed in stemming global warming but had little money and didn’t own the roofs over their heads could still support solar.

Such people could put in $25 or $100 towards a friend or a non-profit installing solar on their rooftops – and get a return on that investment.  Mosaic has helped numerous schools, youth centers, and homes to go solar.

More recently, it has helped numerous commercial properties go solar and its financing model now includes bringing banks into solar financing deals as well, connecting them with people interested in putting solar on the rooftop of their homes or places of worship or schools.

Three years after founder Billy Parish appeared on the VERGE Accelerate stage with an idea, and four years after incorporating as a company, Mosaic is now 55-employees strong and growing revenues at a clip of 40 percent a month.

That’s worth repeating. As Parish told it to GreenBiz last week, “We are growing 40 percent compounded monthly…yes monthly.” 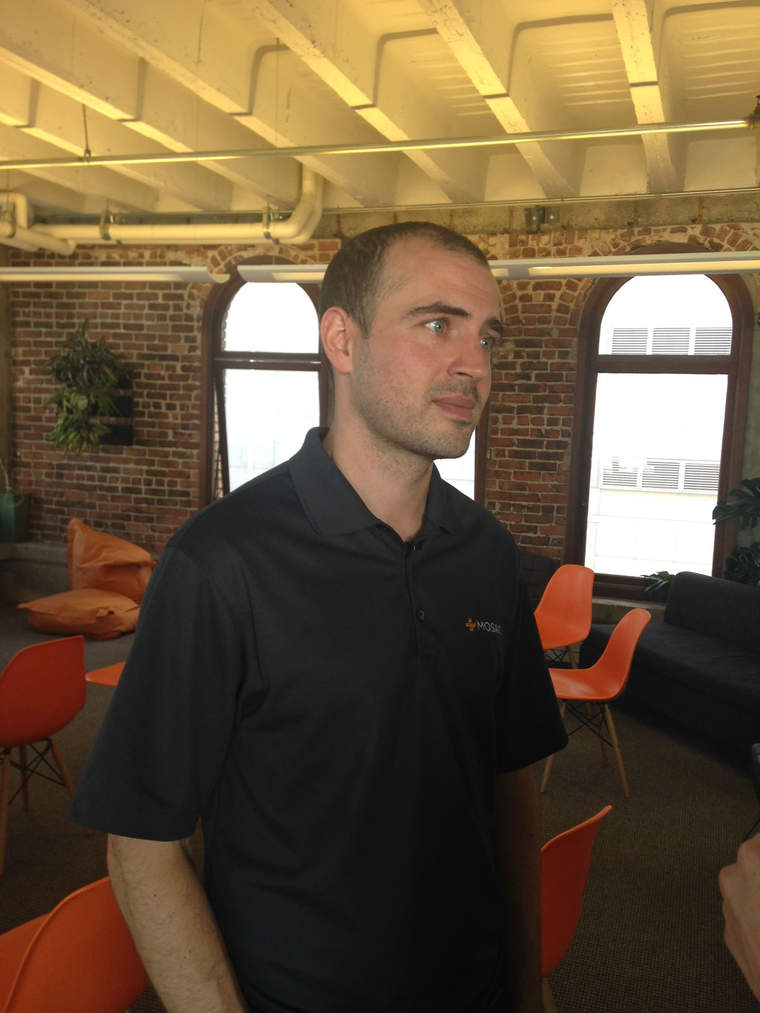 Parish said the world’s transition to renewable energy is accelerating.  With steep drops in the cost of solar and wind electricity, economics has joined environmental concern as the propeller moving homeowners and real estate managers to solar.

“We now offer energy at 14 cents a kilowatt hour. In 2020 it will be 10 cents,” he said.  Worldwide, he characterized the transition to renewable energy as a $1 trillion opportunity.

And Mosaic is, in fact, expanding beyond the U.S. borders. With a grant from Verizon, it has begun financing solar installations in remote areas of Latin America that are currently without electricity.

“Our mission is clean power for all and we created a market for clean energy,” that almost everyone can participate in, from seasoned investors to those with a few bucks in their pocket.