What's Working and What's Not in Walmart's Sustainability Efforts

This week, Walmart released its third sustainability report. Since Environmental Defense Fund (EDF) and our team in Bentonville, Arkansas, works daily with Walmart, we want to share our thoughts on the environmental portion of the report. Because we don’t take money from Walmart -- or any of our corporate partners -- we can be candid about what’s working and what’s not.

This is our fifth year working with Walmart, and throughout that time we’ve been pushing the company hard to take aggressive goals and to be transparent about its results -- clearly disclosing progress and the data to back it up. With this report, it is evident that the message is starting to sink in.

The report gives a complete accounting of all of the sustainability goals to which Walmart has committed, with a detailed progress update for each. The sheer number and scope of the goals is notable, as is the actual progress that the company has made on most of them. To be honest, I find it even more impressive that Walmart is also candid about where they are falling short of a goal. Most companies I know don’t want to talk about what’s not working. But taking risks and setting high goals is what we need more of -- it’s the only way to achieve transformational environmental change. And in the context of progress on many other fronts, a struggle here or there seems just about right.

One great move forward since last year is Walmart’s new climate goal to reduce 20 million metric tons of carbon pollution from its products’ lifecycle and supply chain over the next five years. This fills the biggest hole in the scope of the sustainability program.

But there are some areas in the report, and in Walmart’s program, that still need improvement:

From what we see on the ground, Walmart is indeed working hard to “broaden and accelerate” their sustainability efforts, as CEO Mike Duke says. The folks working on this at Walmart have taken to proudly wearing buttons emblazoned with a “37” representing the number of Walmart sustainability goals (though there are actually 38 with the new climate goal added in). It’s a symbol of how intently they are focused on moving forward to meet those goals.

Elizabeth Sturcken is managing director of Environmental Defense Fund's Corporate Partnerships Program. This content is cross-posted on EDF's Innovation Exchange blog and is reprinted with permission. 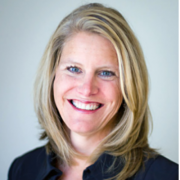