When it comes to analyzing earth’s environment, spacing out is a good idea

Time lapse photography was first used in the 1870s to illustrate a sequence of events difficult for the human eye to discern — famously to document the gait of a galloping horse. Several generations later, climate activists are harnessing the same principles — endowed by satellite imagery, powerful cloud computing resources and artificial intelligence — to chronicle dangerous changes on earth and, hopefully to get better about predicting them.

Planet runs a network of small, bread loaf-sized satellites that are capable of collecting more data and imagery than all of the other systems in orbit, combined. By zooming out into the atmosphere, that technology is able to document the fundamental forces of change such as deforestation, melting glaciers or droughts and make that information "visible, accessible and action," Zolli noted.

The organization was tapped in September by the state of California and several foundations including Bloomberg Philanthropies to provide the technology behind Satellites for Climate Action. The initiative has three initial mandates: analyze coal-fired power plant operations; develop technology to detect greenhouse gases such as methane and CO2; and create analytics that could aid conservation efforts relate to forests, coral reefs and other endangered natural resources.

So many of the transitions that are components of the grand transitions we need to make in this transition to the clean economy are invisible, they are slow.

"This partnership will empower governments and businesses to take action, and it’s an example of what’s possible when the public and private sectors work together," said Michael Bloomberg, the United Nations Secretary-General’s Special Envoy for Climate Change, in a statement about the effort.

Another example of what’s possible is the new partnership between MethaneSAT, a subsidiary of the Environmental Defense Fund, and Ball Aerospace, which is helping the satellite company build sensing instruments for a 350-kilogram system that will be dedicated to monitoring methane from human-made sources. The technology being contributed by Ball will help the equipment measure methane concentrations that are as low as two parts per billion — a relatively small amount, but important for this highly potent GHG.

While satellites have existed for decades, what has changed dramatically in the past five years is our ability to analyze the rich data they provide and correlate it with metrics, maps and other publicly available records that have been available for decades, thanks to sophisticated machine learning algorithms that can extract patterns and powerful cloud computing services that can consume all this information much faster than previously was possible — in a matter of days across multiple computers versus the decades or centuries it might take on a single machine. 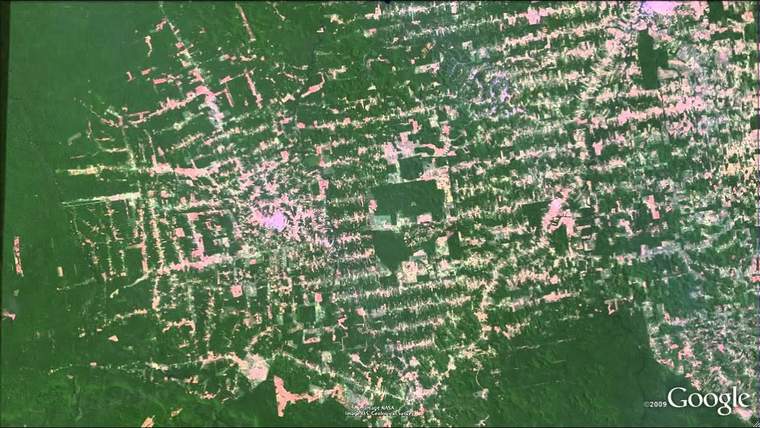 Google Earth
A still image of Amazon deforestation, analyzed by Google Earth.
All three of the top cloud computing companies — Amazon, Microsoft and Google — have dedicated considerable resources that they hope scientists and companies will use for creative new services. Those could be anything from maps that predict crop yields and detect fertilizer use to better urban flood maps that guide sustainable infrastructure development. Google’s resources, for example, include 30 petabytes of data that it makes available to the scientific community for planetary research.

"We don’t have a Dow Jones for deforestation or a Nasdaq for nature, but we have to bring all of this capital that’s sitting on the sidelines into the world’s most essential problems," Zolli said. "We think there is a shift underway from an era of big data to an era of big indicators."

One example of the sorts of services being envisioned comes from Brazil, where a nonprofit called Imazon is using services built on Google Earth to detect development in the Amazon, such as new roads that might be a leading indicator of illegal deforestation.

The organization is using Google Earth’s resources for what researcher Carlos Souza describes as a virtual alert service. Using this service, Imazon can reach into areas that are difficult for humans to enter and create technical documents that prosecutors can use to interdict or intervene, said senior resources Carlos Souza Jr.

"Without working on the law enforcement side, we will be filming the obituary of the earth. That’s not what we want," Souza said.

Google is fielding a growing number of inquiries from consumer goods companies that are interested in using Google Earth to drive supply chain traceability applications, said Rebecca Moore, the engineer who directs the company’s Geo for Good program. In particular, they are hoping to avoid inadvertently buying goods from bad actors in Brazil, Indonesia and other locations.

"There is a recognition that we need radical transparency, where the data is made much more open and available than it has been to date — to the public, to advocacy organizations and throughout the supply chain so that people can know what’s really going on," Moore said.

How scientists use Google and crowdsourcing to map uncharted forests