This is an excerpt from "Green Swans: The Coming Boom in Regenerative Capitalism" by John Elkington (Fast Company Press, April 2020). Published here with permission from the author. The above is an affiliate link and we may get a small commission if you purchase from the site. 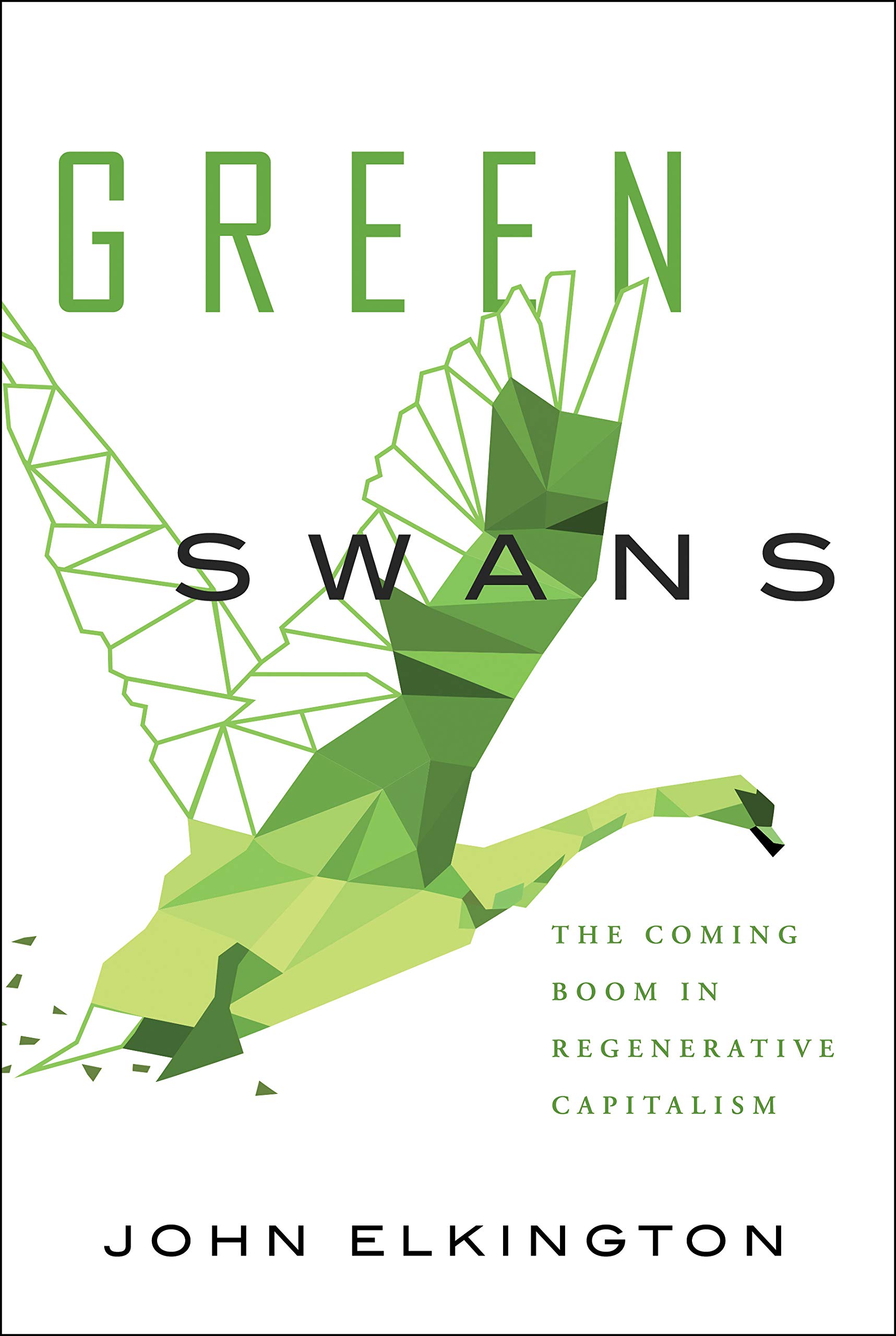 The Green Swan is a symbol of radically better times to come. It’s also a template for exponential change toward the distant goal of a sustainable future for all. Getting from here to there will be no trivial task, however. Times of disruptive change upend market and political pecking orders, creating political shock waves that can last for decades — even generations.

As a decade, meanwhile, the 2020s do not yet seem to have sticky branding like the "Noughties" or the "Teens," but they will, and that branding will likely reflect a period of exponential change. The Exponential Twenties? To paraphrase Dickens, this will be the worst of times for those clinging to the old order, yet potentially the best of times for those embracing and driving the new. Buckle your safety belt.

This book, my 20th, has had an unusually long genesis. It has morphed and mutated considerably along the way. You can expect an often personal account of a learning journey that has taken me around the world and, at times, deep into the future. It’s an investigation, an exploration, not a definitive, unified field theory. It is intended as the beginning of a conversation, not the end.

Recent discussion of the financial impact of climate chaos as a "Green Swan" is to mislabel a "Black Swan." Instead, here is what I mean when I say "Green Swans":

A Green Swan is a profound market shift, generally catalysed by some combination of Black or Gray Swan challenges and changing paradigms, values, mind-sets, politics, policies, technologies, business models and other key factors. A Green Swan delivers exponential progress in the form of economic, social and environmental wealth creation. At worst, it achieves this outcome in two dimensions while holding the third steady. There may be a period of adjustment where one or more dimensions underperform, but the aim is an integrated breakthrough in all three dimensions.

Green Swans are extraordinary — in the sense of out-of-the-ordinary forms of progress — driven and shaped by positive exponentials. In a counterintuitive pairing, they often rise phoenixlike out of the ashes left by Black Swans. Think of the way the natural world can recover and flourish after a volcano erupts or after destructive fishing pressure is removed. However, generally Green Swans are less likely to take us by surprise, as we typically have to plan for and work toward them over a considerable period of time.

My assumption in researching this book has been that the world is headed into some sort of historic U-bend, well beyond a single, normal recession, where the established macroeconomic and political order goes down the tubes, and new ones surface. As we head deeper into the bottom of the U-bend, we enter a period of maximum confusion and uncertainty. Historically, too, this is often the point at which major wars occur.

In the process, established ideologies and mind-sets are coming under intense pressure — among them capitalism, democracy and sustainability (a concept I helped launch decades back). What follows is an investigation into the complex interplay of all three ideologies. In retrospect, I have been on a learning journey that has taken decades to date and, in some ways, feels as if it is only just beginning.

All three concepts — capitalism, democracy and sustainability — represent fiercely contested territory. Don’t talk about capitalism, I was advised. It triggers visceral, uncontrollable reactions. True, though such reactions can take people in very different directions. Talk to some climate activists and you are told that capitalism can do nothing but harm. But talk to some Americans, even those abused by that country’s most exploitative forms of capitalism, and many will tolerate no criticism of "their" system — even when it does them little discernible good.

Such positions, quasi-religious in their reliance on faith over evidence, serve as a red-flag warning that we are stepping into a giant minefield. Still, the ways in which capitalism, democracy and sustainability interact, for good or ill, is our subject here. The timing is particularly interesting, given that even some leading capitalists are now increasingly critical of today’s capitalist system, while many democratic leaders are warning that democracies are at greater risk than at any time since the 1930s.

Capitalism is partly in the spotlight because it has embedded pernicious forms of myopia in our economies, which now threaten to crash the global biosphere. These problems were massively accentuated by neoliberalism. Yet our default setting, neoliberal or not, is to deny the very possibility of collapse, as professor Jem Bendell argues. Denial, however, cannot mask the pace at which we are destabilizing the climate, unraveling the web of life, acidifying the oceans and creating teeth-rattling wealth divides. Indeed, the evidence suggests that the next decade, the 2020s, will see flocks of those proverbial chickens coming home to roost — with the prevailing scientific and economic paradigms shifting at unprecedented speed.

And what about the Triple Bottom Line recalled in 2018?

Meanwhile, for anyone still wondering whatever happened to the triple bottom line, that recall process was part of my own reinvention process. I am now more than happy that it be used, so long as it operates on three of the five levels outlined in Chapter 4: Responsibility (where most current practice clusters), Resilience (where too little effort yet focuses) and Regeneration (where the spotlight must now shift). Ultimately, any true Green Swan will help — simultaneously — to regenerate the natural, social and economic worlds. An existentially taxing, civilizational task. But we have left ourselves no alternative.

The upside is that, for the foreseeable future, this will be by far the biggest opportunity for adventure, growth and evolution in the tightly coupled stories of humankind, capitalism and our home planet, Earth.