Where the circular economy meets the Internet of Things

Institutions, both in the private and public sector, always can reap the public relations benefits of doing good, even while still accomplishing their goals. As resources become scarcer, a major way to enhance social performance is through resource conservation, which is being underused.

Although the traditional model of the linear economy has worked forever and never will be fully replaced, it is essentially wasteful. The circular economy, in comparison, which involves resources and capital goods reentering the system for reuse instead of being discarded, saves on production costs, promotes recycling, decreases waste and enhances social performance. When circular economy models are combined with internet-connected devices that gather and relay data to central computers, efficiency skyrockets.

As a result of finite resource depletion, the future economy is destined to become more circular. The economic shift toward the circular economy undoubtedly will be hastened by the already ubiquitous presence of IoT, its profitability and the positive public response it yields.

Unlike the linear economy, which is a "take, make, dispose" model, the circular economy is an industrial economy that increases resource productivity with the intention of reducing waste and pollution. The main value drivers of the circular economy  are 1) extending use cycles lengths of an asset; 2) increasing use of an asset; 3) looping or cascading assets through additional use cycles; and 4) regeneration of nutrients to the biosphere.

As the circular economy expands into different sectors of the economy, farmers remotely may monitor their crops and use GPS guided tractors to perfectly plow and harvest.

The Internet of Things is the inter-networking of physical devices through electronics and sensors used to collect and exchange data. The main value drivers of IoT are the capability to define location, condition and availability of the assets they monitor. By 2020 at least 20 million IoT connected devices are expected worldwide.

The nexus between the value drivers of the circular economy and the Internet of Things greatly enhances the circular economy. If an institution's goals are profitability and conservation, IoT enables those goals with big data and analysis. By automatically and remotely monitoring the efficiency of a resource during harvesting, production and at the end of its use cycle, all parts of the value chain can become more efficient.

Once the time comes for a user to discard the asset, IoT can aid in the asset retrieval so that it can be recycled into its components. With efficient reverse logistics, goods gain second life, fewer biological nutrients are extracted from the environment and the looping or cascading of assets is enabled. 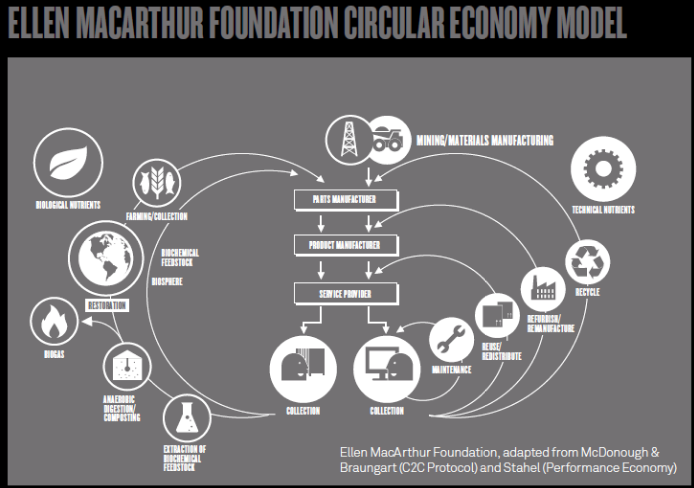 One way to change the traditional value chain is the IoT-enabled leasing model. Instead of selling an expensive appliance or a vehicle, manufacturers willingly can produce them with the intention of leasing to their customers. By embedding these assets with IoT, manufacturers can monitor the asset's condition; thereby dynamically repairing the assets at precise times. In theory, the quality of the asset will improve, as it's in the producers best interest to make it durable rather than disposable and replaceable.

Even today, many sectors already benefit from IoT in resource conservation. In the energy sector, Barcelona has reduced its power grid energy consumption by 33 percent, while GE has begun using "smart" power meters that reduce customers power bills 10 to 20 percent. GE also has automated its wind turbines and solar panels, thereby automatically adjusting to the wind and angle of the sun.

In the built environment, cities such as Hong Kong have implemented IoT monitoring for preventative maintenance of transportation infrastructure, while Rio de Janeiro monitors traffic patterns and crime at its central operations center. Mexico City has installed fans in its buildings which suck up local smog. In the waste management sector, San Francisco and London have installed solar-powered automated waste bins that alert local authorities to when they are full; creating ideal routes for trash collection and reducing operational costs by 70 percent.

Despite the many advantages to this innovation, there are numerous current limitations. Due to difficulty in legislating for new technologies, governmental regulation lags behind innovation. For example, because Brazil, China and Russia do not have legal standards to distinguish re-manufactured products from used ones, cross-border reverse supply-chains are blocked. Reverse supply chains also are hurt by current lack of codemand, caused by low residual value of returned products. IoT technology itself, which collects so much data on people’s private lives, generates major privacy concerns.

Because of the potential profits and increased social performance, the future implementation of an IoT enhanced circular economy is bright.

Questions arise: Who owns this data collected? How reliable are IoT dependent systems? How vulnerable to hackers are these assets? Despite the prevalence of IoT today, with 73 percent of companies invest in big data analytics, most of that data is merely used to detect and control anomalies and IoT remains vastly underused. Take an oil rig, for example. It may have 30,000 sensors, but only 1 percent of them are examined. Underuse of IoT in 2013 cost businesses an estimated $544 billion alone.

Even with these current barriers, because of the potential profits and increased social performance, the future implementation of an IoT-enhanced circular economy is bright.

As government regulation catches up and technology improves, recycling and conservation will become more profitable and reverse supply chains can proliferate. When the ownership of collected data is finally clearly defined by laws, then the interoperability of IoT data can take hold to increase its efficiency.

For example, as the circular economy expands into different sectors of the economy, farmers remotely may monitor their crops and use GPS guided tractors to perfectly plow and harvest; governments can prevent depleting fish stocks by tracking fishing boats with IoT; energy companies can share their energy production responsibilities by attaching connectivity-enabled solar panels on city roofs; in the infrastructure sector GPS guided driver-free smart cars can reduce congestion by taking optimal routes; in health care, $1.1 trillion a year of value can be created with remote health care in monitoring chronic-disease patients.

Estimates are that the potential profits from institutions adopting circular economy models could decrease costs by 20 percent, along with waste. The increase in efficiency combined with the goodwill generated by conservation is a win-win proposition for innovation; even with costs implementation, future monetary profitability will make it a no-brainer. 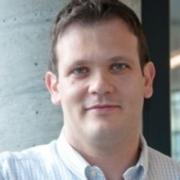 See all by Mark Esposito