Where is Walmart on the 'Hype Cycle'?

Is Walmart more hype than reality? Having worked with Walmart since 2005, my colleagues and I at Environmental Defense Fund are often asking that question, stepping back from our day-to-day work to assess the reality of the world we encounter in Bentonville.

One way to view that question is through something called the Gartner Hype Cycle, a predictable cycle of public expectation and disappointment that accompanies many new ideas.  “Since virtually all innovations require time and experience to realize their real potential, it’s almost inevitable that reports of early experiences will disappoint us,” write Jackie Fenn and Mark Raskino in their 2008 book, Mastering the Hype Cycle. “Once the excitement starts to wane even slightly, the same…factors that drove the excitement upward now begin to drive it right back down again.” 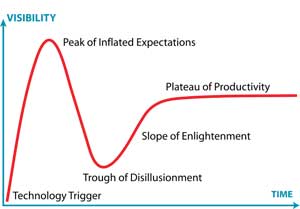 So, is Walmart on an upward or downward trajectory? Is it moving towards a “trough of disillusionment,” or is it on a path to “enlightenment”?

Since Walmart began its sustainability quest in 2005, its quest has always been a robust, reliable and transparent system allowing for honest, apples-to-apples assessment of product footprints, from raw material to final disposal and all points in between.

That system needs to accurately measure, track and verify sustainability attributes from embedded energy to component toxicity and apply to hundreds of thousands of products from sources across the globe.

Walmart’s answer was the Sustainability Index, announced in 2009.

Buzz was intense, anticipation high. Then, after two years, when everything wasn’t done, when the sustainability scores of every product weren’t known and being shared with customers, the buzz turned sour and disparaging comments piled up.

Walmart bears some responsibility for questions on its commitment and progress.   It appeared at times that they were backing away from sustainability.  Projects started and stopped. Sustainability messaging got softer, and sometimes seemed to disappear. Walmart moved slower than we knew they could.

Some people asked why EDF was still working with Walmart. Our answer:  What we are trying to do is hard, and none of us has yet figured it out. Despite best intentions, balls sometimes drop. The quick wins up front create expectations for smooth sailing, when in fact the tough challenges are still ahead.

Most importantly, Walmart is moving forward. In January, for example, Walmart quietly launched the Index Sustainable Value Network (iSVN), led by executives from across Walmart’s merchandising divisions in the US, Sam’s Club and International.

At the heart of current efforts is Walmart’s new product category scorecard. It combines information on each supplier’s practices with product information based on environmental and social analyses by The Sustainability Consortium (TSC). Working with EDF and others, Walmart spent much of 2011 pilot testing category assessments in major product segments including milk, detergent, fresh produce, cereal, electronics and textiles.

For 2012, Walmart is set to integrate the scorecards into merchandising for more than 100 categories. Buyers will get prioritized, actionable sustainability information that allows them to review suppliers and identify laggards and leaders.

Improvements in sustainability will tie directly to incentives for buyers and suppliers, which has been a critical goal for EDF. The roll-out will continue for several years to cover all major categories in Walmart’s business.

Walmart won’t be alone; Best Buy and U.K. retailing giant Tesco are among those who also will start rolling out to their suppliers unified sustainability questionnaires based on TSC’s work.

A lot of groundwork was quietly laid in 2011.  We anticipate the ongoing results of that work will be revealed at Walmart's April 18 Milestone Meeting where key executives will talk in more detail about these projects.

As always, good intentions do not equal results. But Walmart is listening to its partners, learning from both its successes and failures, and finally telling suppliers to pay attention to sustainability again.

From EDF’s close perspective, it is clear Walmart is still working hard on sustainability. When Walmart hit the Trough of Disillusionment, they kept slogging through it. In our view, the Slope of Enlightenment described by Gartner consultants Fenn and Raskino now appears a little closer.

Up to 30 Walmart Stores to Receive Thin Film Solar Panels

Parting the Chemical Curtain with GreenWERCS

See all by Michelle Mauthe Harvey