If you’re like so many conscientious consumers, you’ve experienced the disappointment that comes when you realize the "lean" turkey breast you bought has 300 percent of your daily value of sodium. Instantly, food choices feel more complex; you’ve learned the hard way that the pursuit of a low-fat diet is not the same as a healthy diet.

The energy-water nexus shows us that our energy choices are much like our food choices. The environmental benefits of an energy diet low in carbon emissions might be diminished by increased water consumption or waste, and the unforeseen tradeoffs between the two resources -- such as more sodium in lieu of less fat -- can hurt us in the long run.

Roughly 90 percent of the energy we use today comes from nuclear or fossil fuel power plants, which require 190 billion gallons of water per day, or 39 percent of all U.S. freshwater withdrawals. (Water “withdrawal” indicates the water withdrawn from ground level water sources; not to be confused with “consumption,” which indicates the amount of water lost to evaporation.)

The water intensity of these energy resources brings us face-to-face with the realities of energy and water overconsumption. High electricity consumption means more water withdrawals, placing extra strain on the water system. At the same time, emissions from power plants contribute to climate change, which increases the amount of water required to produce energy and intensifies severe drought.

Our energy choices have a part to play in these dire situations. Let’s look at a breakdown of how energy resources stack up in terms of water consumption and discuss their carbon footprints: 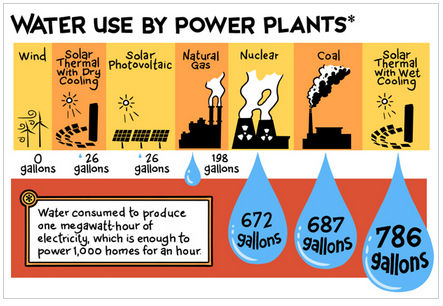 • Coal generally requires more water than nuclear, and generates more greenhouse gases emissions and other pollutants than any other energy source (about 2.15 lb CO2 per kWh electricity), making coal something like the chili cheese fries of energy.

• Natural gas emits about half the carbon emissions of coal (about 1.22 lb CO2 per kWh electricity) and requires less water than coal, but still needs an enormous amount of water for drilling activities and conversion to electricity.

If you need an example of a state currently coping with realities of the energy-water nexus, look no further than Texas. The state is currently in the midst of a multi-year drought, yet the vast majority of the electricity Texans use comes from sources that contribute to this prolonged drought (namely, natural gas, coal and nuclear). With nearly 90 percent of Texas’ electricity coming from these three sources, we have a serious problem.

Here’s a breakdown of fuels used in electricity production in Texas: 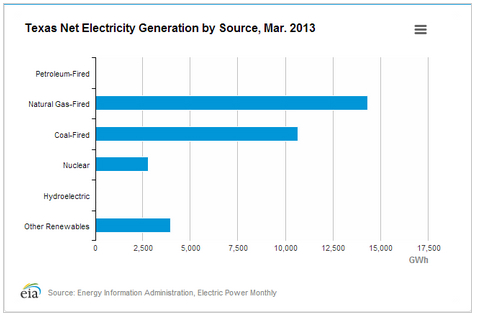 These water-intensive power plants consume thousands of gallons of drinking water per day, while roughly 90 percent of the state remains in drought conditions. The ongoing water shortage has prompted 65 percent of Texas counties to impose water use restrictions, and even forced some communities to truck in fresh drinking water several times a day. And don’t forget, Texas’ vast fleet of coal and natural gas generators contribute to our shameful ranking as No. 1 carbon emitter in the United States.

No matter what, when it comes to fossil fuels, there will always be a hidden environmental consequence -- much like the sodium hiding in your "lean" turkey. There are, however, guilt-free, low-water options: renewable energy and energy efficiency.

Wind and solar energy consume little to no water and generate negligible carbon emissions . Texas, already an international leader in the use of wind power, should increase use of its clean energy sources to cope with the continuing drought and the ongoing Texas energy crunch.

At the same time, the state should look to energy efficiency to reduce water use and cut carbon pollution. The more we invest in energy efficiency, the more we cut our overall energy use -- saving enormous amounts of water and reducing harmful power plant emissions. After all, the cleanest source of energy is the energy (and water) we don’t use.

However, Texas and other states have a long way to go before decision-makers tactically conserve water and use the best available energy technologies.

See all by Kate Zerrenner