Most would agree that some corporate giants have taken great strides toward sustainability in recent years. But experts in the field still cite too few companies doing so.

Instead, our latest GlobeScan/SustainAbility Leadership survey finds that experts believe that other non-governmental actors have been driving the sustainable development agenda since the United Nations Earth Summit in Rio in 1992. The business sector is not seen as the driver, with few exceptions.

What, if anything, can we learn from those few companies that have earned recognition from practitioners for their leadership? 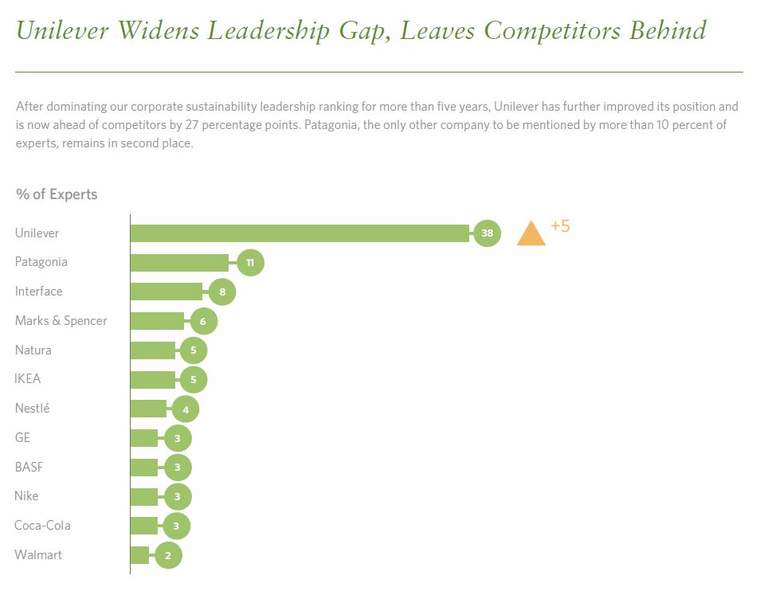 In March and April when we asked our panel of 800-plus experts which companies they think are leaders at integrating sustainability into their business, Unilever emerged as the most-cited company yet again and by a wide margin. It was cited by 38 percent of respondents, up 5 percent from 2014.

Natura (Portuguese), based in Brazil and now the world’s largest B Corporation, quietly has been moving up the rankings in recent years with its innovative business model — one that masterfully blends environmentally and socially shared values upstream and down.

Also notably, IKEA makes the top-10 list with only a couple of years of its “People & Planet Positive” (PDF) initiative under its belt. IKEA is perceived by experts “as leading beyond the firm” and “creating and supporting broader coalitions such as We Mean Business.” Unilever soon may have a battle for recognition on its hands — competition it surely would welcome.

Yet for now, the research finds an ongoing consolidation around a few leadership companies across all regions of the world. Unilever is in a leadership position throughout much of it — Asia (33 percent), Africa/Middle East (36 percent), North America (39 percent) — with the largest margin in Europe (44 percent). Natura, however, is perceived as the dominant sustainability leader in Latin America/Caribbean (33 percent), and Interface has a slight lead in Oceania (14 percent). 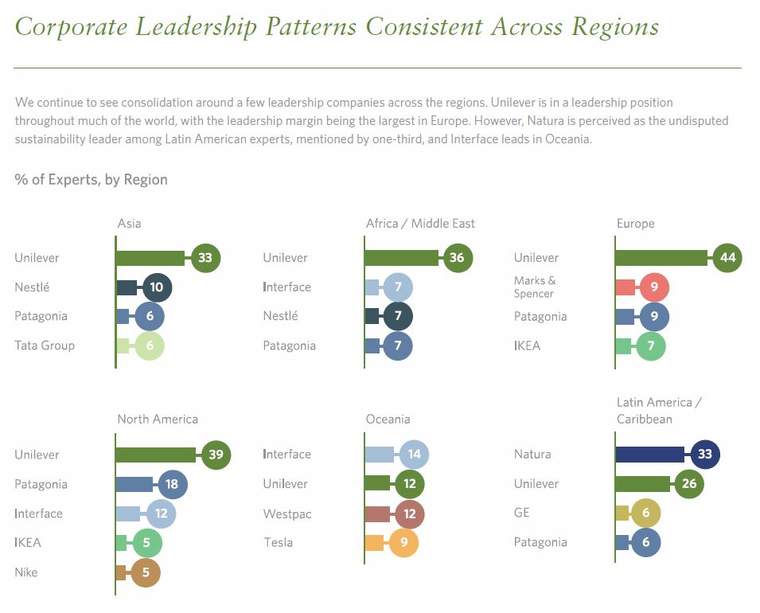 A historical perspective on our survey's findings provides insight into the changing landscape of leadership over the years. Volatility has been the rule, and companies have had difficulty maintaining a top-ranked position for long. 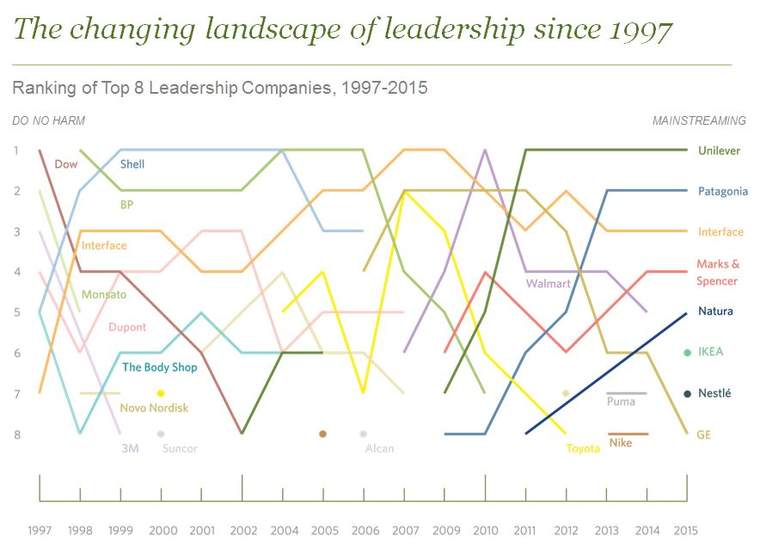 Way back in our 1997 poll, the top four companies in terms of perceived leadership were Dow, Monsanto, DuPont and 3M. Quite a different leaderboard than that of today. This early era of sustainability, which we might call “do no harm,” was characterized by risk management and upstream supply chain work.

The dynamics have changed in more recent years, with brands such as Unilever, Patagonia, Marks & Spencer and Natura all ranking within the top five. This new phase of “mainstreaming” is all about reach and the number of consumers touched, in addition to sustainable sourcing.

But there’s more to it than rational sustainability management. Unilever and Interface, both of which enjoy long stints at or near the top of rankings, have had outspoken executive leaders who never shied away from speaking in emotional terms — and frequently. This kind of authenticity has been proven to drive trust in organizations, buttress reputations and build brand equity. Recognition for leadership follows.

So it is intuitive that, when we ask experts why they think the specific companies they name are leaders, the most common responses by experts relate to the values of an organization’s leaders and the degree to which they have integrated them across their enterprises (26 percent). Sustainability being a part of the core business model, an outcome of values-driven management, ranks second (22 percent, up notably in recent years), followed by the nuts-and-bolts of sustainable products and services (12 percent). Human characteristics seem to come first, and business attributes naturally follow. 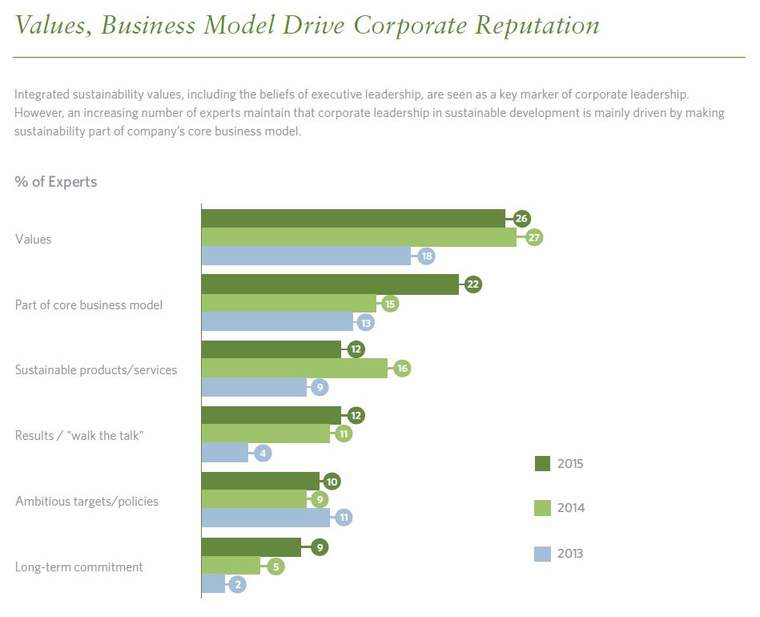 When will emerging economies embrace sustainability?