SolarCity to cities: Skip the utilities

As more cities dabble in renewable energy and seek greater control over their sources of electricity — along with better assurances that power will keep flowing during outages and price spikes — a market has emerged for off-the-grid options.

That field accelerated after Hurricane Sandy clobbered the eastern seaboard in 2012 and led to weeks of outages. Several states including New York began providing incentives for cities to invest in microgrids as back up power systems, while also fueling much broader conversations about building cities for climate resilience.

On Monday, rooftop solar provider SolarCity waded into the market in a big way by announcing a turnkey microgrid product that combines solar rooftop with battery storage technology — a pet project for SolarCity and Telsa Motors founder Elon Musk — along with software-driven controls effectively allowing cities to run their own utilities.

GridLogic, as SolarCity calls it, is sold as a tool to “enable a cleaner, more resilient and more affordable way of providing power.” The company said it will offer pay-as-you-go lease options, but did not disclose exact pricing for the "microgrid-as-a-service" product offering. On its website, SolarCity says system costs will be calculated after an assessment of a customer's load demand and other variables.

“The main markets for microgrids have been campuses and medical facilities and military bases. We want to extend this to remote locations,” he said. “In the last 10 to 15 years, there’ve been more incidences of severe weather that led to outages, so there is a growing need for this.”

Patwa cites a five-fold growth in extreme weather incidents in the last decade, compared to the 1970's, which he said has made energy independence “top of mind” for many cities.

But it’s not a big stretch that what is initially a back up option for cities could grow in use, over time.

“Communities can meet multiple objectives. The primary one is resilience, but an additional one is saving energy costs if they decide to use higher percentage of renewables,” in their energy mix. 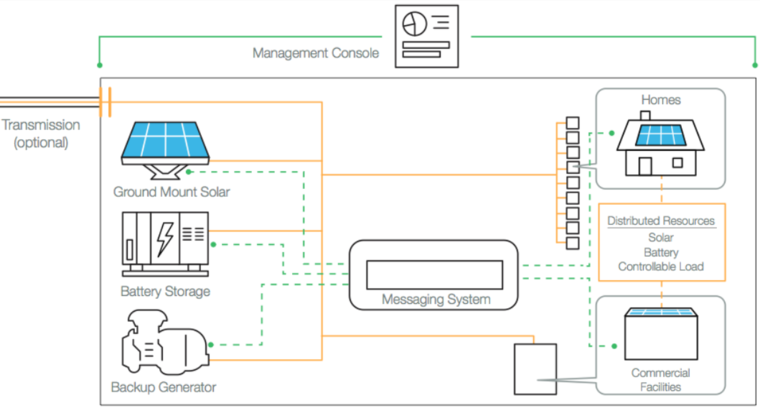 The new SolarCity offering comes as some cities seek alternatives to heavy reliance on regional utilities. A number of West Coast cities have adopted Community Choice Aggregation strategies in which they procure energy locally and decide the energy mix, but they still rely on the regional utility for power distribution.

Operating a microgrid, however, could take the big utilities out of the picture — or almost.  SolarCity said its GridLogic could be tied to the grid, or not, depending on the customer's choice.

Calls into one large utility, Pacific Gas & Electricity, which covers SolarCity's headquarters region, did not produce an immediate comment.

Siemens and GE have been the big microgrid providers to large hospitals and military bases, which maintain them for back up energy for their critical operations.

"We see a gap in the market in terms of providing solution to municipalities,” which have only lately begun to think of back-up electricity generation systems, Patwa said.  To make it an easy decision, “we provide the design, installation, service and maintenance.”

For SolarCity, which is the biggest solar rooftop provider in both the residential and commercial markets, this is about entering a new market and rolling solar, battery storage technology and its brand of financing into one product offering.

Through its affiliation with Tesla — Musk remains the chair of SolarCity's board — the company already offers battery storage technology, a Demand Logic storage product, to large companies.

“For the commercial market, we’ve already been deploying energy storage to help large commercial clients manage their load,” said SolarCity spokesman Jonathan Bass. “GridLodgic is about leveraging capabilities of communications and software with our existing capabilities in storage and solar — and extending them to a larger scale.”

Investors, however, didn't seem thrilled with the product announcement. Shares of SolarCity dipped 0.86 points or just 1.8 percent in trading Monday, to close at $47.53 a share. Contributors to a Yahoo finance message board were among market watchers musing that the stock hit could be tied to the recent streak of low oil prices: "Company keeps coming out with good news yet stock continues to fall with oil. Won't turn until oil rebounds," one commenter said.