Who will win the battery wars?

Advances in battery technology and the electrification of the automobile have contributed enormously to the changing technological landscape we see all around us.

Lithium-ion batteries (LIBs) have existed since the 1980s, but the recent adoption of LIBs in electric vehicles (EVs) has driven the development of newer and better battery chemistries. A recent report released by PreScouter details the current state of the LIB market for electric vehicles and how the market will evolve in the next decade.

According to the report, external factors will drive battery adoption, with the major drivers being the cost evolution of key raw materials, supply/demand projections and investments in the space from key players and governments.

With the increased adoption of EVs and the growing demand for energy storage, lithium demand from automotive applications reached over 34,000t LCE (lithium carbonate equivalent) in 2017 and is forecast to more than double by the end of the decade.

Research and development has led to great advances in battery performance, but safety concerns continue to be one drawback of these battery technologies, as many contain cobalt, which is toxic and dangerous to humans, and can contribute to thermal degradation of the battery at elevated temperatures. Other factors considered in choosing relevant battery chemistries include cost, life span, performance, and energy and power density.

The geopolitics of batteries

Geopolitics is a key external factor that could influence battery development. The key raw materials used in the production of LIBs that may be affected by geopolitics are primarily cobalt, nickel and lithium.

Lithium Nickel Manganese Cobalt Oxide (NMC) Batteries: NMC batteries account for nearly 28 percent of global EV sales, and Fitch forecasts that the market share will grow to 63 percent by 2027. The NMC battery has a high cycle life suitable for both off-grid and very unstable grids, with commercial products featuring a 60 percent state of charge (SOC) greater than 6,000 cycles at 90 percent depth of discharge (DOD).

The SOC is the ratio of battery capacity of the current to the nominal capacity. In EV applications, the SOC is used to determine the range of the EV.

Lithium Nickel Cobalt Aluminum Oxide (NCA) Batteries: NCA batteries are becoming increasingly important in electric powertrains and in grid storage because of the recent increase in energy density (>280 Wh/kg), which was previously in the 150-220 Wh/kg range. NCA batteries require a small amount of active materials, yet can deliver a higher energy density. They are also more stable than NMC batteries due to the addition of aluminum.

Lithium Iron Phosphate (LFP) Batteries: The overall market demand for LFP will double to over 200,000 tons/year. The Asia-Pacific region is expected to dominate the market, with the major application being automobiles. With operating ranges from -4.4 degrees Celsius to 70 degrees Celsius, LFP batteries handle far wider variations in temperature than other chemistries. They also have a slightly higher self-discharge rate and low cell voltage (3.3V). "Thermal runaways," which occur when the temperature of a battery increases continuously, are less common for an LFP battery, as it doesn’t require cobalt.

Lithium Cobalt Oxide (LCO) and Lithium Manganese Oxide (LMO) Batteries: The LCO (cobalt-only) and LMO (manganese-only) batteries are precursors to NMC and NCA batteries. LMO batteries are usually used along with NMC batteries in EVs. This type of battery was first introduced in the Mitsubishi i-MiEV with Toshiba’s batteries. LMO-NMC blends are found in the batteries of the older Nissan Leaf models due to their cost advantages. In 2018, Nissan Leaf launched a blend of LMO/NMC with a 40 kWh battery size, and the batteries were manufactured by AESC/LG Chem.

Current trends in the EV market

At present, batteries with cobalt (NMC/NCA) are preferred due to their high energy density. However, safety remains an issue as NMC and NCA are prone to thermal runaways — especially as the devices get smaller. Thermal runaways may be caused by overcharging, an internal fault, physical damage to the battery, a hot environment or a combination of the above.

LFP batteries provide a significantly reduced chance of thermal runaway, but provide relatively low energy and contain no cobalt. Although an LFP battery has lower cycle life, it is used widely in China, and as such, the Chinese (and global markets) benefit from this well-developed manufacturing infrastructure and supply chain. 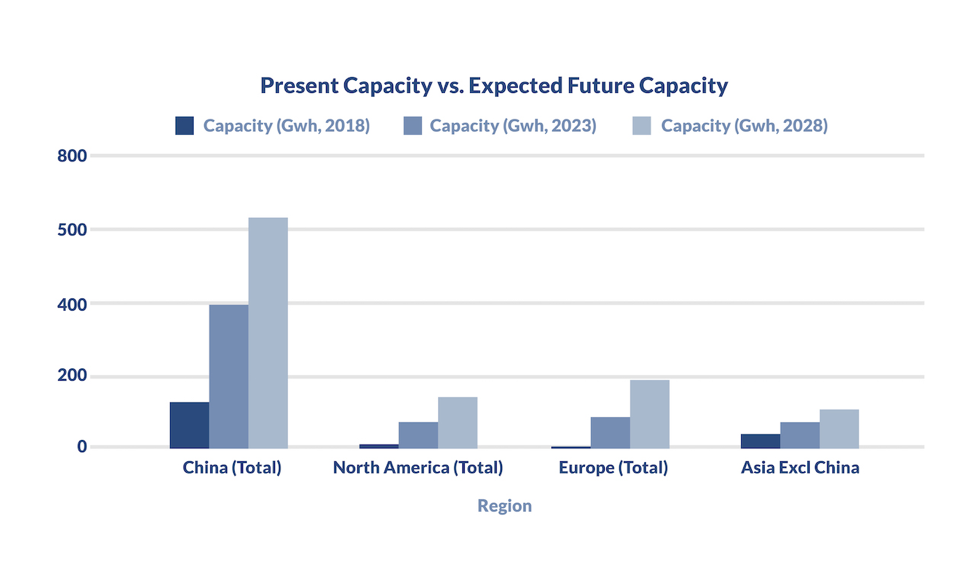 NMC chemistries have become the preferred technology of original equipment manufacturers in the automotive industry in recent years. This may change as companies are working toward deploying batteries containing less cobalt due to the spiking prices and toxicity concerns.

Today, LFP chemistry dominates the Chinese market with over 44 percent of the total battery chemistry demand. Although the rest of the world prefers NMC chemistries, China’s dominance of the sector over the next decade will increase the advantages of LFP compared to NMC. China’s vast resources in earth materials such as phosphate also lead to a preference of this chemistry.

According to our research, NMC will become the first to dominate the EV sector in the early 2020s, but will be overtaken by LFP batteries when a new rise in cobalt prices coincides with a boost of LFP’s energy density achieved through R&D.

The rise in the cost of cobalt also will increase the price of NMC cells compared to LFP cells, as they contain cobalt, thus accelerating market favor for LFP.

If LFP gains market share over NMC, the Chinese market will become the center of the electric vehicle segment, with core stakeholders and competencies in research and development, manufacturing and commercial products.

See all by Sofiane Boukhalfa