Whole Foods has become one of the first U.S. retailers to go above and beyond government standards with a new tiered rating system that could redefine what constitutes responsibly grown produce. Less than two months after its introduction, the system's impact is felt within the industry.

The company spent three years collaborating with suppliers, scientists and experts to develop the rating system, Responsibly Grown. It labels fresh fruits, vegetables and flowers as "good," "better" or "best" to help shoppers make more informed choices in the produce and floral departments. The scheme also prohibits some of the most hazardous neurotoxins still allowed in agriculture, including several organophosphate insecticides, which can impair neurological development in children born to mothers exposed via diet, agricultural work or living in nearby communities.

"At this time, we have approximately 50 percent of our produce rated nationally and we are working toward our goal of having all of our produce and flowers rated in Responsibly Grown," Matt Rogers, Whole Foods' global produce coordinator, told GreenBiz. "There are currently no plans to expand this program beyond Whole Foods Market."

Responsibly Grown also addresses the primary threats facing pollinators, including high-risk pesticide use, loss of habitat and disease spread from managed bees, as well as wild pollinators. Four of the most common neonicotinoids allowed in the U.S. will be prohibited for growers to reach the Responsibly Grown "best" level. Recent studies have found that the presence of even small amounts of neonicotinoids can have "sub-lethal" or deadly effects on wildlife.

Last year, the EPA began forbidding the use of some neonicotinoid pesticide products where bees are present. In May, a Harvard study strengthened the link between neonicotinoid pesticides and the collapse of honey bee colonies. Neonicotinoid also is often used to pre-treat wildflowers sold in retail. Earlier this year, Home Depot and BJ's Wholesale Club pledged to cut the neurotoxins from their supply chains in response to petitions.

"The impact on farms [from Responsibly Grown] has been fairly immediate, and quite positive," said Eric Mader, assistant pollinator program director for the Xerces Society for Invertebrate Conservation. "We've seen a diverse community of farmers from blueberry growers in New Jersey, to tree fruit growers in California, and even vegetable growers in Mexico, who are immediately working to restore wildflower habitat on field edges and to ensure that their pesticide practices are as safe as possible for bees. The growers see this as a win-win since they intimately understand the role that bees play in crop pollination."

Mader said the growers working to implement pollinator conservation strategies because of Responsibly Grown are farmers who probably had been thinking about doing so for a while, and some who already had launched their own initial efforts. What Responsibly Grown has done, however, is to help move those growers another step further along that journey. In short, the Whole Foods produce team already has been working honestly and thoughtfully for a long time to source from the most sustainable farms possible. Its Responsibly Grown program rewards and empowers those farms to do even better by essentially giving them a higher profile in the marketplace.

"My program at the Xerces Society works in tandem with market-based reward systems like Responsibly Grown by providing farmers with the 'how-to' resources that actually help them implement these strategies," Mader said. "For example, our biologists across the country can go out and meet individually with these growers, and help them design and install features such as flowering field borders for bees. Our staff also connects the farmers to USDA conservation programs that offer cost-share grants to offset the costs of such projects."

The result is a three-part system: market rewards through Responsibly Grown, financial support for pollinator conservation through USDA and technical assistance from Mader's staff to design and carry out projects. Ultimately, with these pieces in place — and with the value that bees and beneficial insects provide to farms — it makes no sense to not have pollinator conservation efforts underway at the farm level.

It is still unclear how other retailers are looking at this, but Responsibly Grown helps to re-frame consumer expectations. In the case of one huge retail discounter, Mader has heard individual supply chain managers talking about Responsibly Grown, so it is generating a lot of "buzz" in the food sector.

How the scoring system works

To earn a "good" rating, a farm must take 16 major steps to protect air, soil, water and human health. Growers also must comply with the Responsibly Grown pesticide policy, which restricts growers to using only pesticides registered with the Environmental Protection Agency, regardless of the country of origin. This means that farms outside the U.S. can’t supply Whole Foods Market with fresh fruits, vegetables and flowers grown using pesticides not allowed in the U.S.; there are a few exceptions. Growers also cannot use biosolids or irradiation and must commit to GMO transparency.

According to Whole Foods, the system covers multiple topics in each key category:

Whole Foods is well aware that climate change, extreme weather events and bulging populations are making it difficult for the produce retail industry to offer healthy, affordable food to consumers. Changing climatic conditions affect environmental and socioeconomic outcomes for agriculture, according to the United Nations Food and Agriculture Organization (PDF). The disruption causes changes in the availability and quality of land, soil and water resources that are later reflected in crop performance, which causes prices to rise.

Understanding these challenges is the first step in being able to overcome them. Walmart-owned U.K. supermarket chain Asda worked with consultants PwC earlier this year to map its entire global fresh produce supply chain. Using models practiced by the Intergovernmental Panel on Climate Change, it found that as much as 95 percent of its fresh produce category is under threat from the impacts of global warming.

Responsibly Grown will allow Whole Foods to better weather the effects of climate change by guaranteeing a resilient supply chain. This undoubtedly will prove to be a competitive advantage over retailers with less transparent and sustainable sourcing policies. 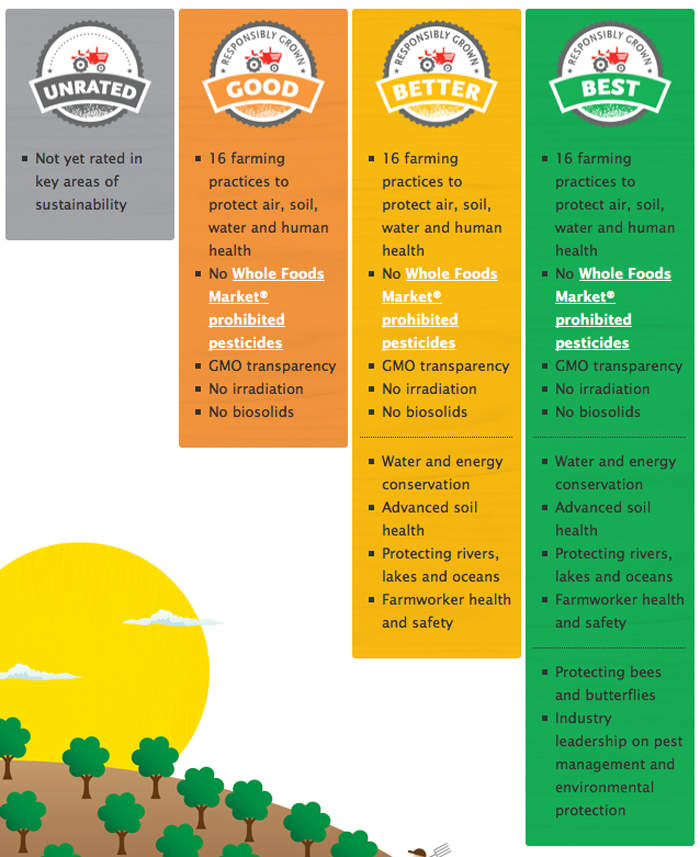 Pollinator loss in the vineyards, and what some are doing about it