If you don’t make your home in the midwestern United States, chances are you’ve never heard of Hy-Vee. That will change.

The $8.7 billion privately held supermarket chain is making quite the name for itself when it comes to sustainably sourced seafood — climbing into the Top 3 on the annual Greenpeace ranking of major U.S. grocery retailers.

That’s all the more impressive when you consider this is just the Iowa company’s second year on the list, where it ranked behind Whole Foods (No. 1 for the third consecutive year) and Wegmans Food Markets.

One of Hy-Vee biggest strengths in the NGO’s mind: It’s not afraid to talk about its policy. (Peek at its website for proof.) Plus, it takes risks. It was the first of the Top 3 ranked companies to discontinue selling fish marketed as Chilean sea bass, although it still sells eight of the 22 Red List species.

“After its 'Carting Away the Oceans' debut last year, Hy-Vee doubled down on its strong performance, coming in third place overall and entering the good category for the first time. Whole Foods, Wegmans and Safeway take note: Hy-Vee means business about sustainable seafood. … Hy-Vee dropped Chilean sea bass, issued a strong public statement against GMO seafood, is on track to hit its 2015 sustainability goals, and twice weighed in at key moments to address [Illegal, Unreported and Unregulated] fishing in the industry by sending letters to Congress.”

The Greenpeace report, published this morning, includes the highest score granted by the non-governmental organization to Whole Foods.

Four key criteria areas are used for rating: Policy (the processes in place to enforce sourcing strategies); Initiatives (in particular, taking a proactive stance on fishery management or illegal trafficking); Labeling and Transparency (including consumer education); and Red List Inventory (how many endangered species are carried on the supermarket’s shelves).

Among the 25 companies considered, 80 percent were granted a “Passing” score. 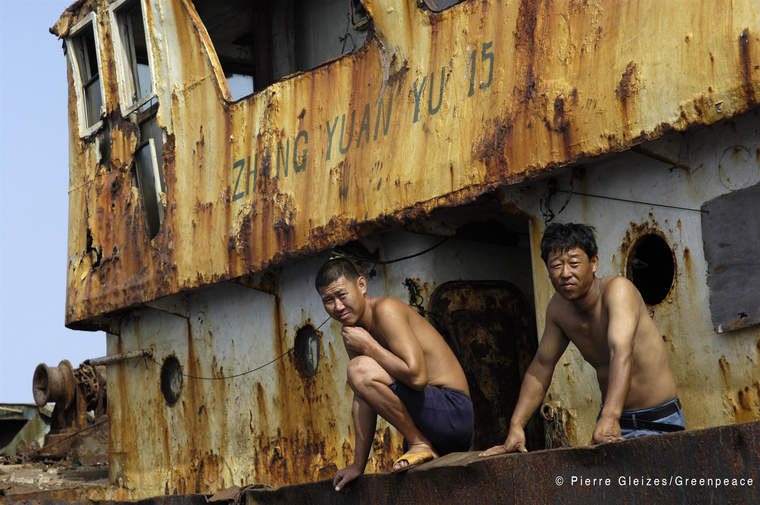 Greenpeace/Pierre Gleizes
</p><p>Crew on Rusting Fishing Vessel (Defending Our Oceans Tour; West Africa: 2006). Crew from one of the vessels in the "zombie" graveyard of rusting Chinese fishing vessels, 150 kilometers off the coast of West Africa. When Greenpeace first arrived there were nine or 10 ships and on the return journey three had left. The crews said they had gone fishing.</p><p>

Still, several trends are particularly concerning, including rampant and persistent human rights abuses. Shoddy sourcing and slavery are often linked, said David Pinsky, the NGO’s senior oceans campaigner. In recent months, the media has focused on operators that use monetary threats, intimidation and even kidnapping to find inexpensive labor to work fishing boats and processing facilities.

“In the past year, we have seen some scandals around this,” he said, referring to an expose involving allegations of slavery related to the largest global supplier of shrimp, Charoen Pokphand Foods of Thailand. “The connections are so clear. This is the moment when it’s incumbent that every retailer takes a stand.”

Greenpeace recommends 10 steps grocery and food retailers can take to help eliminate these human rights abuses. They include these three biggies:

Supermarkets should kick the can

As you might expect, policies for canned tuna are under scrutiny in the ranking, and the NGO has few good things to report.

“Retailers that sell or are supplied by Bumble Bee, Chicken of the Sea or Starkist are complicit,” Pinsky said. “Many of those same retailers sell unsustainable tuna under their own brand names, and have either no policy or an inadequate policy to solve this problem.”

Notably, that includes the No. 2 supermarket chain on the ranking, Wegmans.

The six companies making progress in this area include Costco and Target, both of which now sell private-label tuna sourced using more sustainable fishing practices. Whole Foods, Hy-Vee, Safeway and Trader Joe’s also include these products. The three top brands in this area are Wild Planet, American Tuna and Ocean Naturals.

Bearing down on the Bering Sea

Another theme running through this year’s edition of “Carting Away the Oceans” is concern over the Bering Sea, the source of about half the seafood sold in the United States — including pollock, crab, halibut and Pacific cod.

So far, 11 retailers have backed calls to protect the so-called Green Belt, including Whole Foods, Wegmans, Giant Eagle and Costco, which all jumped on board this year. The area is a vital habitat for corals and sponges, often damaged by fishing gear that drags the seafloor.

“For seafood businesses, setting aside a portion of the canyons and Green Belt habitat provides a valuable insurance policy that can help ensure the future health of the ecosystem and the fisheries it sustains. With the increasing impacts of climate change and ocean acidification, as well as the cumulative degradation of seafloor habitat by industrial fishing gear, creating a buffer against uncertainty makes sense from both an economic and ecological perspective.”

Right now, the most notable holdouts when it comes to Bering Sea policies are Target and Walmart, Pinsky said.

Plus, three other things to watch closely

1. Trader Joe’s lost its “good” ranking, a dubious first, which caused it to slip to No. 7 on the list. The primary reason? A lack of transparency over the systems it uses to ensure traceability.

2. There’s reason for concern over Safeway’s future rankings. It was still in the Top 5 this year, but its merger with Albertsons could mean changes in its sourcing strategy. The latter (ranked No. 19) has been far less proactive.

3. The most improved retailer was Southeastern Grocers, which operates the Winn-Dixie chain, among others. Even though its rating is still in the red, it scored higher than rival Publix primarily because of progress in eliminating Red List species. 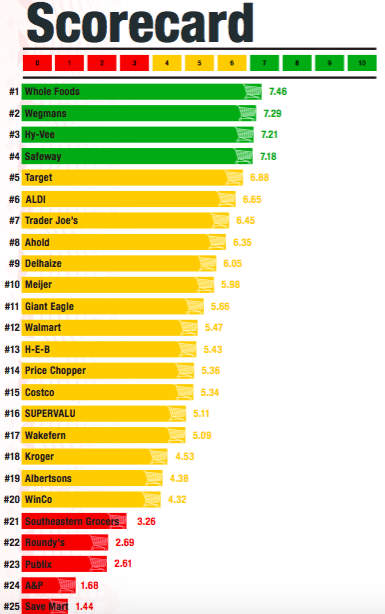