Who's the biggest force in corporate patents for climate-related innovations?

Are you looking in all the right places for technological solutions to climate change?

I can’t possibly enumerate the sheer number of innovation competitions and startup accelerators I have the opportunity to write about on an almost weekly basis, not to mention the Accelerate live-pitch programs that highlight the annual VERGE and Circularity conferences hosted by GreenBiz. It’s awesome that so much funding is chasing startups. But don’t forget: The money behind the research and development (R&D) programs at many large corporations counts well into the billions every year. If you’re looking only to solopreneurs and entrepreneurs dreaming in the famed towns of Silicon Valley for practical climate solutions, your lens is far too narrow.

Indeed, the new ideas in "low-carbon" technologies, as least as calculated by the number of patents filed on an annual basis for new applications, approaches and inventions, are being driven predominantly by companies with massive R&D budgets — with most of them representing the industrial, automotive and information technology sectors. That’s according to an annual report on environmental, social and governance issues published earlier this month by MSCI, a financial services firm that publishes investment portfolio analysis and research.

What’s more, the dominant country of origin was not the United States, it was Japan. The U.S. was second in sheer number of patents, followed by South Korea, Germany and China. "Empirical evidence," the MSCI report authors note, "has indicated a U-shaped relationship between scale and innovation, suggesting that larger companies with greater R&D budgets could in fact have a greater propensity to innovate than smaller ones."

How can it make this claim? MSCI used data from databases maintained by the European Patent office, which back in 2015 started tagging patent applications related to cleantech and climate change mitigation technologies — everything from solutions for handling waste to smart grid tech to automotive advances.

From 2013 to 2017, MSCI reports almost 60,000 patents were registered for cleantech advances by Japan-based companies. That compares with roughly 24,000 in the U.S. and 21,000 in South Korea. The average market capitalization of top 10 percent of filers was $47 billion. "Our analysis shows the companies that filed for the largest number of overall patents also filed for the most low-carbon patents during that period," the report’s authors wrote. 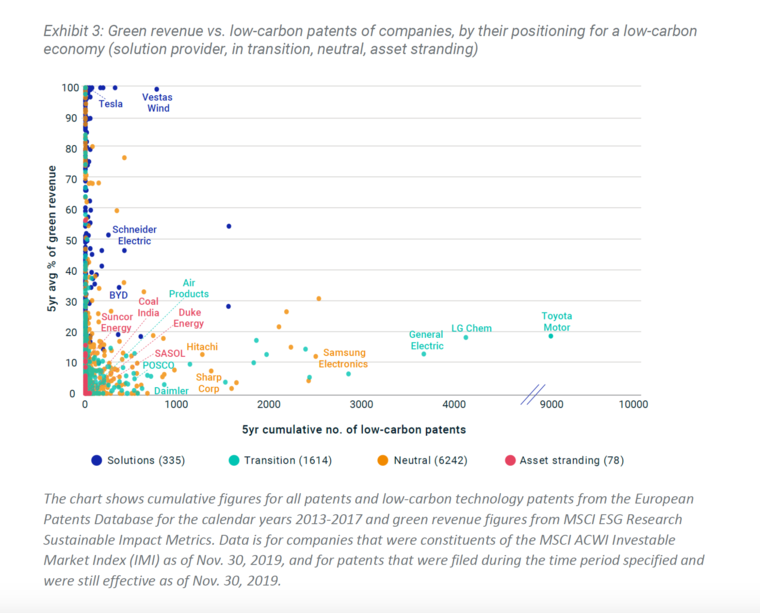 Strangely enough, some companies that you probably think of as huge cleantech solutions providers today (at least in terms of revenue) with a big focus on alternative energy or energy efficiency or smart buildings have filed for a relatively small number of patents specifically focused on climate change solutions, the MCSI analysis suggests. Some big names mentioned in its charts are electric vehicle giants BYD and Tesla, and power infrastructure players Schneider Electric and Vestas Wind.

Who were some of the largest corporate filers? Toyota Motor, LG Chem and General Electric, as well as other massive companies in the middle of profound strategic and operational transitions that will dictate whether the organization survives or thrives in the future, including Daimler and Royal Dutch Shell. Among the top 50 filers of low-carbon technology patents, almost half were in the middle of a huge transition.

So, what should we make of all this? While most of these companies don’t currently generate much revenue related to low- or zero-carbon technologies, the potential is big and we should be watching large companies carefully to see if they can derive value from these patents: "These quiet innovators may be the ‘sleeping giants’ of a greener future."