Pity the shopper who wants to buy "green" paper or forest products.

They can choose products certified by the Forest Stewardship Council (FSC) or by the Sustainable Forestry Initiative (SFI).

Only the most dedicated deep-green consumer can be expected to understand the differences between the two.

And few know there's a war of words going on between backers of the FSC and SFI.

Todd Paglia, executive director of the activist group Forest Ethics, says this about the SFI:

SFI is dangerous because it is a lie -- it tells consumers that the product bearing the label is green when it isn't. SFI allows logging in old growth, logging in endangered species habitat, clearcut logging on landslide prone slopes above salmon streams…. In other words, business as usual with a "green" façade.

When industry is helping write the rules and set its own standards they will be high on rhetoric and extremely low on substance. That is SFI: This is a fake eco-label of, by, and for the forest industry.

Not surprisingly, this kind of talk angers the folks at SFI -- so much so that they approached The New York Community Trust, a foundation that supports Forest Ethics, to complain. On its website SFI says:

With just 10 percent of the world's forests certified to any certification standard, groups should work together to increase responsible forestry. Instead, ForestEthics spends energy and resources on well-funded attacks to discredit SFI, often citing outdated, incomplete, inaccurate or misleading information.

Such conflicts aren't unique to the forest products industry, although the rhetoric here is unusually heated. Eco-labels are supposed to guide consumers to environmentally friendly choices, but they have become so numerous -- more than 300, by some estimates -- and so confusing that consumers now need their own guides to eco-labels, like this Greener Choices website from Consumer Reports. Meanwhile, organizations that create standards have formed their own organization, called the ISEAL Alliance, to separate good standards from the not-so-good. It's like a Good Housekeeping seal for other seals. With words like "natural" and "sustainable" and "green" being thrown around, it's likely that some consumers just give up trying to figure out which claims are meaningful and which are not. 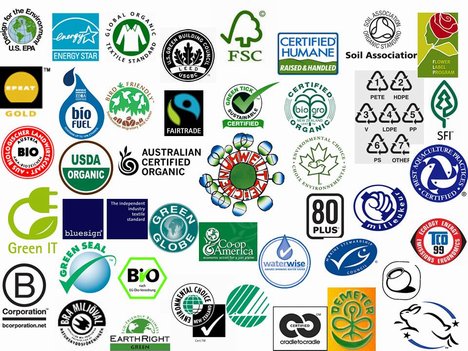 In the forestry wars, Forest Ethics announced a victory this week: Seven companies, including four from the FORTUNE 500 -- Aetna, Allstate, Office Depot and Symantec -- said they would phase out their use of the SFI label.

When I called Yalmaz, he told me: "We've really had to struggle with the question of, when is a product green?" To the average consumer, he said, an eco-label signals that a product has gone beyond the norm. SFI has become the norm. "In North America, the vast majority of the mainstream providers of paper products have got SFI certification," he said. In one sense, the SFI standard has become a victim of its success. That's particularly true because, according to a hierarchy established by Office Depot -- in which papers are ranked as dark green, mid-green and light green -- recycled paper is favored over even sustainably harvested virgin paper. SFI doesn't even qualify as light green, but instead gets a rating of "meets industry environmental norms."

This isn't to say that SFI doesn't do good work, particularly with small-scale, family-owned foresters. SFI program participants have, among other things, invested over $1.1 billion in forest research, and over $55 million to support community programs such as education and training for 120,000 loggers and foresters, the organization says.

But there are good reasons to trust FSC, and some to be suspicious of SFI. Here are a few:

History: The FSC was started in 1993 by environmentalists, while SFI was formed a year later by the North American forest products industry. It didn't fully separate from the American Forest and Paper Association until 2007 and, even now, the CEOs of several big forestry companies sit on its board. To be fair, so do six board members from environmental groups including Resources for the Future and The Conservation Fund.

The LEED brouhaha: A long battle involved lots of lobbying about whether to provide points for SFI-certified wood under the widely accepted LEED standards for green buildings ended with a decision that did not favor SFI. According to The New York Times Green blog, NGOs including the Sierra Club, the World Wildlife Fund, the National Wildlife Federation, the Natural Resources Defense Council and Greenpeace opposed granting favorable treatment to SFI.

Conflicts of interest: SFI today gives its seal of approval or 'certification' to activities on more than 160 million acres of forests or tree plantations all across North America. Virtually all of SFI's funding comes from the companies that own or manage these lands, according to Forest Ethics. Unfortunately, the same thing is true of many certification systems, including FSC -- they take money from the companies they audit.

How to resolve knotty questions (couldn't resist!) like these is by no means clear. Perhaps independent ratings systems -- like Good Guide, the Sustainability Consortium or UL Environment -- will bring clarity to the debate about what products are environmentally preferable. Maybe responsible retailers should take on the job, as Office Depot seems to be doing. Or maybe consumers will learn to trust only those seals that have earned their own seals of approval, as crazy as that sounds.