Kurt Kuehn, former chief financial officer of UPS, has a confession to make: He historically has not been a fan of integrated sustainability and financial reporting. Indeed, he has been known to say they belong in parallel universes.

But Kuehn was also one of the earliest executive-team champions of the logistics giant's environmental programs. He helped craft and produce the first UPS corporate sustainability report back in 2002 and is well acquainted with the survey fatigue issues that many companies face when it comes to tracking, collecting and reporting on environment footprint metrics.

Kuehn believes that what makes the reporting system created by the Sustainability Accounting Standards Board (SASB) unique — and that could help drive it mainstream with the financial community over the next two years — is its focus on encouraging companies to share the metrics that really matter to their industry in a way that is easily accessible for investors.

"It's really a form of risk awareness and mitigation … of enlightened self-interest," he said during a panel discussion at the board's annual symposium in late November.

It's really a form of risk awareness and mitigation.

This year's gathering was attended by more than 375 individuals representing investor relations teams, corporate sustainability strategists, institutional investors and regulatory agencies. "The idea that sustainability matters are divorced from financial issues is wrong, as long as they are focused on materiality," said Jean Rogers, founder and chair of the SASB standards board.

When SASB emerged in 2011, much was made of the perceived overlap with other reporting frameworks designed to help companies disclose progress against efforts to improve the environmental footprint of their operations — through carbon emissions reductions, water conservation, waste management and natural resource stewardship, among other things.

"We're trying to achieve a world where an analyst can sort through a distinct crystallization of what matters," noted Kirsty Jenkinson, managing director of sustainable investment strategies for benefits company Wespath Investment Management.

In mid-2017, the leaders of SASB and the Global Reporting Initiative took pains to rebut that perception by publishing a joint editorial that differentiates the missions of the two frameworks. "Rather than being in competition, GRI and SASB are designed to fulfill different purposes for different audiences," they wrote. 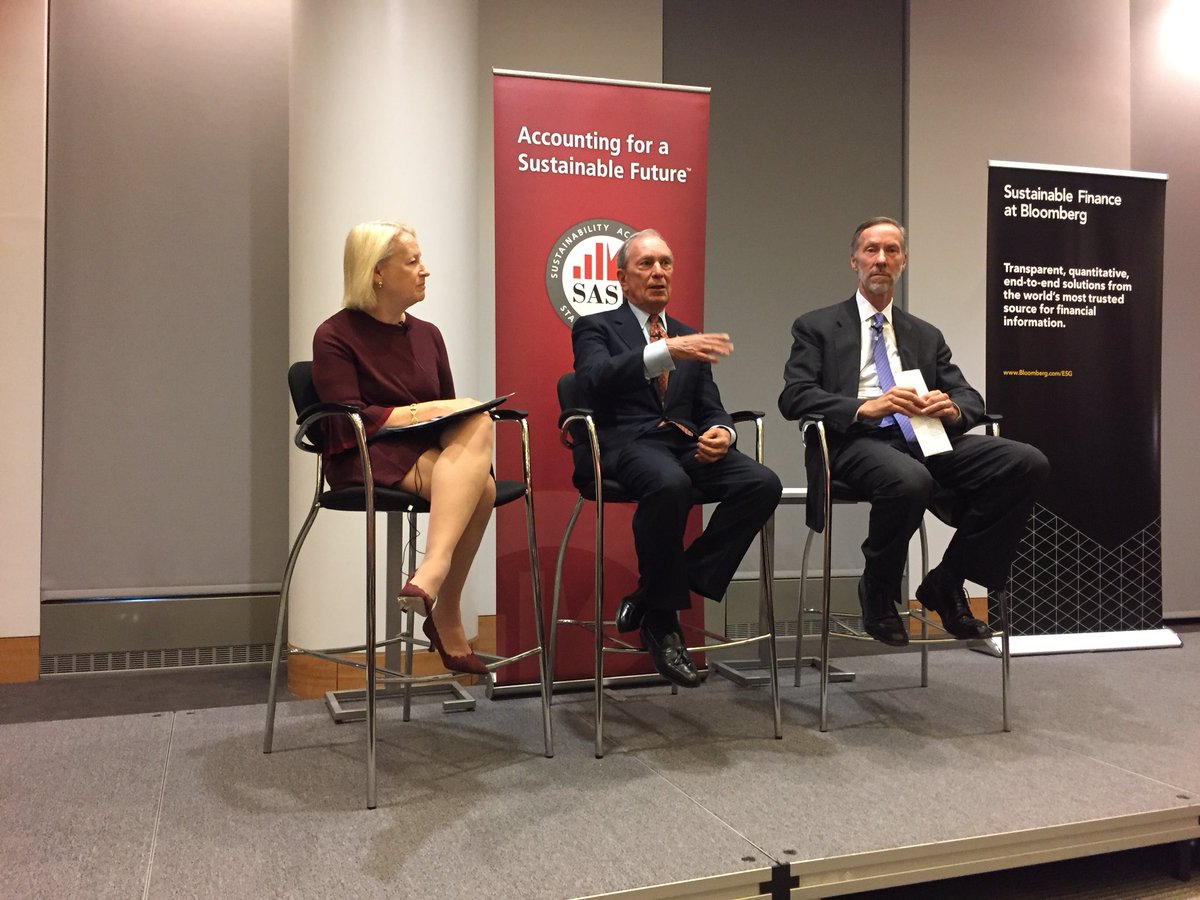 More specifically, GRI is for sustainability practioners and a broader community of stakeholders such as consumers, they argued, while SASB's mission is to educate those seeking to make investment decisions.

"Material information is the right of every investor," Rogers said, during her opening speech at the symposium. "I'm worried about Mr. and Mrs. 401K," she added, recounting a recent conversation with an investment adviser who downplayed the weight of environmental, social and governance issues.

The conditions certainly seem almost perfect for the next big update to SASB's work: the anticipated finalization of codified, industry-specific disclosure standards across 11 sectors, due in early 2018. According to SASB's annual analysis about the "state of disclosure," almost three-quarters of the top 10 companies across 79 industries are reporting on at least some metrics that SASB seeks to codify. Right now, though, about half of them use generic statements as part of vague, unquantified "boilerplate" legal copy to mention these factors. Alongside this, 95 percent of the 250 largest global companies produce some sort of separate sustainability or corporate social responsibility report.

And more of them are pledging to disclose even more data: As of this week, 237 companies representing a market capitalization of more than $6.3 trillion have lined up to support the recommendations of the Task Force on Climate-related Financial Disclosures, part of the G20's Financial Stability Board. These are suggestions for voluntary transparency.

"High-quality disclosure is essential for focusing finance and markets on delivering the transition to a low-carbon economy," said Mark Tucker, chairman of financial services giant HSBC Holdings Group. "The TCFD offers the prospect of a comprehensive framework for disclosure. The challenge and opportunity now is to put theory into practice and implement the TCFD recommendations consistently and sustainably across countries and sectors."

Meanwhile, interest in this information — especially among institutional investors — is reaching unprecedented levels. Big ratings companies such as Morningstar and Standard and Poor's are snapping up this information, and influential fund managers such as the Vanguard Group demand more information about the materiality of climate-related risks.

"Our investors are long-term-oriented," said William McNabb, chairman and CEO of Vanguard, during a keynote interview at the SASB conference. "The impact on the value of a company of not handling the risk can be profound."

Vanguard made headlines over the summer when McNabb said its team will push companies for more transparency. "It's the responsibility of boards to reconsider how — and how thoroughly — companies disclose this information," McNabb added. "We will be sponges for the information that they are creating, and what we are looking for over time is better disclosure, especially as we look across multiple companies."

Last year, JetBlue became one of the first companies, and certainly the first airline, to start using the provisional version of SASB's reporting guidelines — albeit in a separate report. "These additional disclosures focus on four sustainability issues and 10 metrics that are deemed to be material for our industry," the company wrote. "Disclosure is not a static concept. Markets are dynamic and disclosure must keep pace."

While not all of the disclosures are related to environmental issues — labor relations are also a big deal for airlines, as are safety factors — the report includes four specific measures that are part of the SASB code: gross global Scope 1 emissions; a description of the long-term strategy for managing those emissions; total fuel consumed; and notional amount of fuel hedged.

Sophia Mendelsohn, head of sustainability for JetBlue, said one of the biggest stumbling blocks when it came to internal advocacy of the SASB code was short-term-ism of most quarterly financial updates. Many questions asked by analysts make it difficult to advocate discussing long-term problems. "Our first problem is one of linguistics. These are risk factors and they are called factors for a reason," Mendelsohn said.

We're trying to achieve a world where an analyst can sort through a distinct crystallization of what matters.

If a board is reluctant to disclose certain information for competitive reasons — or because it's difficult to benchmark it against other companies — for now, it might be possible to find compromise by at least moving to report on whether it is a focus for the board. "There is a powerful compulsion in just asking whether or not certain data is disclosed to the board," Mendelsohn said.

Former UPS executive Kuehn said SASB's decision to focus on requesting that companies disclose very sector-relevant information should help push it into "prime time" over the next year. "These are not extensive, they are a few key elements that are critical across industries," Kuehn said. "That means your peers will be talking about the same things."

Brian Macnamara, senior vice president and corporate controller for the company, said the long-term effect of these measures are becoming material on results. The framework also helps the REIT better compare operating results of different properties. So, for example, the company studies energy per occupied room and water usage per square foot of property. It's important that these measures are considered thoughtfully and the defense of them is "rock solid" against questions from auditors or lawyers.

Talk to the lawyers

Indeed, when it comes to the case against including sustainability measures in core financial disclosures, one of the biggest concerns remains the potential legal challenges associated with being more transparent.

For one thing, the SASB guidelines force companies to look at future issues rather than report on things that have happened in the past — the big exception is requirements around addressing significant risk factors. But by choosing to talk about some issues and not others, companies potentially could leave themselves open to fraud accusations, according to a panel of lawyers and regulatory experts that spoke during the SASB conference.

"The moment you voluntarily open your mouth and omit something material, you lie," observed Donald Langevoort, the Thomas Aquinas Professor of Law at the Georgetown University Law Center.

What constitutes something "material"? According to the panelists, it's any information that could be significant to an investor making an investment in a company or making a voting decision. "The people at the very top have the power to shut you down. You have to be extra persuasive," Langevoort suggested.