Why 2018 will be a make or break year for renewables

The coming year will make or break U.S. renewable energy markets, as state and regional governments defend their 21st century policies against a Trump administration plan to end competition in the nation’s power markets and subsidize old coal and nuclear plants.

Wind and solar power are booming in the United States — and around the world — thanks to low prices, technology improvements, government policies that favor clean energy and energy security and growing demand from businesses, consumers and local governments. The increase in cheap renewables and natural gas power has led to a shift away from expensive coal and nuclear power.

In an attempt to turn back the tide, Energy Secretary Rick Perry proposed in September that federal regulators change the nation’s power-market rules to require special payments for coal and nuclear power plants. It is unclear what action, if any, the Federal Energy Regulatory Commission will take, particularly in light of intense opposition to the proposal by the nation’s grid operators, several state regulators, the renewable energy industry, the oil and gas industry and other industry, consumer and environmental groups.

The Republican tax plan initially targeted the wind and electric vehicle industries with removal of federal financial incentives. The final legislation leaves the primary renewable energy policies alone, except that it changes the tax regime for international companies in a way that could remove incentives that those companies earlier had to invest in renewables. 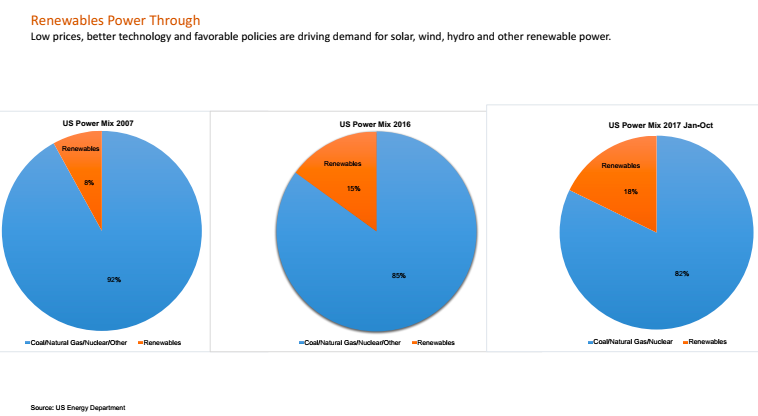 The solar industry isn’t out of the woods yet, though. President Donald Trump is scheduled to decide in the coming weeks whether to impose tariffs on  imported solar panels and cells, which would drive up solar power prices and likely lead to lower demand. Two U.S. solar-panel factories, owned by Suniva and SolarWorld, asked the administration to impose the tariffs to combat cheap imports from Asia and Mexico that the factories claim drove them into bankruptcy.

State policies and incentives that favor renewables and new technologies, such as batteries and other storage devices, smart power inverters and real-time energy management systems that use machine learning, are driving greater adoption of renewables. So is a desire by an ever-growing number of businesses, cities and institutions to buy renewables and get off dirty energy. If hurdles in Washington succeed, it could hold back renewable energy growth in the U.S., the second-largest energy user in the world. But if state governments, grid operators, industry groups and renewable energy supporters succeed in beating back encroachments of the solar and wind markets, they are likely to continue growing.

Globally, solar, wind and other renewable power development is likely to more than double from 2017 through 2022, to 1,174 gigawatts of capacity, compared to the previous five years, according to an October forecast by the International Energy Agency (IEA). Renewables will supply 30 percent of global power generation by 2022, up from 24 percent currently. The rise of renewables is driving down demand for coal in the U.S., China and globally. The IEA predicts coal’s share of the global energy mix will fall to 26 percent in 2022, from 27 percent currently.

Globally, solar, wind and other renewable power development is likely to more than double from 2017 through 2022, to 1,174 gigawatts.

Renewables supplied 18 percent of U.S. power generation in 2017 through October, up from 15.2 percent during the same period in 2016, according to data from the Energy Department.

In California, utilities use solar, wind and other renewable sources for 30 percent of the power they sold in 2017, and that percentage is set to grow to one-half of all power sold in the state, by 2030. New York currently uses renewables for 23 percent of the state’s supply, and that share also is slated to expand to one-half by 2030, according to the state. Wind farms supply more than 15 percent of power generated in Texas, and that share is likely to grow following the planned closure of three aging coal plants operated by Vistra Energy.

"Renewable energy is not an alternative technology; it is now the dominant source of new generation capacity," said Scott Jacobs, chief executive and co-founder of clean-energy investment firm Generate Capital. "The single thing that will continue to drive renewable energy forward as well as other clean technologies is the compelling value proposition that they offer customers."

Renewable energy is not an alternative technology; it is now the dominant source of new generation capacity.

The trend toward renewables and away from more expensive coal and nuclear power plants is playing out in other regions. In California, Pacific Gas & Electric plans to shut down the Diablo Canyon nuclear plant in 2025, due in large part to the plant’s high costs compared to renewables and natural gas plants.

"The nuclear and coal-fired generation facilities are legacies of an extinct age," California Public Utilities Commission officials wrote in comments filed in November with the Federal Energy Regulatory Commission. "Many of them are being retired because they are too expensive to compete with emerging technologies and do not offer the reliability and resiliency as their proponents claim."

U.S. nuclear power plants rely on foreign sources for 89 percent of the uranium they need for fuel, and the plants easily can be disabled during a disaster, such as the 2011 Japan earthquake and tsunami that caused a disaster at the Fukushima Daichi nuclear plant, the CPUC officials added.

The nuclear and coal-fired generation facilities are legacies of an extinct age.

California also is working to wean itself off natural gas. Utilities are increasingly turning to batteries to store extra power needed when demand is high, rather than rely on conventional natural gas-fired peaker plants.

Other states are gearing up for more renewables as well. New York, Massachusetts and seven other Northeast states agreed in December to cut power plant emissions by at least 30 percent by 2030. The Regional Greenhouse Gas Initiative, which allows power plant operators in the states to buy and sell pollution permits, has led to a 40 percent reduction in power plant emissions since 2005. Switching to renewables is a key strategy to cut emissions.

New York, Massachusetts and seven other Northeast states will cut power plant emissions by at least 30 percent by 2030.

The U.S. Department of Defense continues to be a major clean-energy consumer, as it aims to use renewables for one-fifth of power supplies for all armed forces. U.S. military installations had more than 1,600 renewable energy projects in 2016, including nearly 1,000 solar-panel arrays, according to a report.
Topics:
Tags: