It’s not just about carbon removal, it’s about creating or preserving economic opportunities in rural communities.

The first investment by e-commerce and cloud services powerhouse Amazon’s $100 million Right Now Climate Fund underscores the growing interest in nature-based solutions for carbon removal. But this is not yet-another-tree-planting commitment.

The $10 million grant, which will fund two emerging programs focused on conservation in the Appalachian Mountains, also highlights the importance of protecting sustainably managed working forests — particularly those owned by smaller companies or families. By some estimates, families or individuals own close to 40 percent of all U.S. forests (PDF), or 290 million acres — that’s more than either the federal government or corporations.

While other programs, notably the unique $150 million green bond issued last fall by the Conservation Fund and Goldman Sachs, are geared toward preserving larger forests, Amazon’s money will go toward projects that have been harder to get off the ground for lack of funding, according to the NGOs partnering with the tech giant on the grant.

We can’t protect standing trees in any other way than with a carbon program. This will allow us to do maintenance.

The first, the Family Forest Carbon Program, is specifically focused on helping smaller forest owners — those who own a couple thousand acres rather than hundreds of thousands of acres — participate in carbon credit marketplaces. The second, the Forest Carbon Co-op (PDF), is focused on enabling owners of midsize forests benefit in similar ways. Amazon has teamed up with The Nature Conservancy, the American Forest Foundation (which funds the Family Forest effort) and the Vermont Land Trust (which is managing the co-op initiative) to support these programs.

"Family forest owners are a critical piece of the puzzle when it comes to tackling climate change," noted Lynn Scarlett, chief external affairs office for The Nature Conservancy, in a statement. "But many of America’s nearly 11 million family forest owners may face barriers that prevent them from taking action. Those who own small acreages have not been able to access existing carbon markets — which can provide income as well as help sequester carbon on their lands — due to high development costs."

Amazon is the largest funder of the two programs. The specific goals for its grant are:

Among other things, the $10 million will fund new ways for verifying and measuring reforestation activities or sustainable tree harvesting methods.

The American Forest Foundation has been developing the new Family Forest Carbon Program for several years with support from companies including VF Corp, West Rock, Domtar, International Paper and Vulcan Materials, said Tom Martin, president and CEO of the foundation. It works with close to 100,000 farms, representing almost 20 million acres across the United States.

"If we can’t get families and individuals engaged, we are missing a big potential benefit when it comes to carbon reduction," he said. "But many don’t have the resources to actively think about what to do to make it better."

While the practices the program will support will vary depending on the land, they share one core principle: the ability to store carbon in a scientifically confirmable way. (It’s working with certification body Verra on this.) Those measures might include removing invasive species and encouraging the preservation of high-grade trees, which are often cut for lumber.

Susan Benedict, whose family owns 2,087 acres of forest near State College, Pennsylvania, said having access to carbon markets is critical for her operation to continue investing in stewardship activities such as preserving more of her land’s old-growth forest. "We can’t protect standing trees in any other way than with a carbon program. This will allow us to do maintenance," she told GreenBiz.

Benedict has been following the management practices of the American Tree Farm System since the 2002 timeframe but has been seeking ways to increase the income associated from the property without sacrificing old growth — business for the mills that used to operate on the property has declined, depressing prices, and she has found it more difficult to pay the taxes on the property, which has been in her family for three generations.

The grant money will enable Benedict’s forestry manager to invest in thinning of low-value trees that should make the surrounding stands more healthy as well as measures meant to eliminate invasive vegetation and insects that have been an issue for the forest in the past, she said. The habitat she’s focused on protecting offers habitat for wildlife including trout, great-horned owls and barred owls. 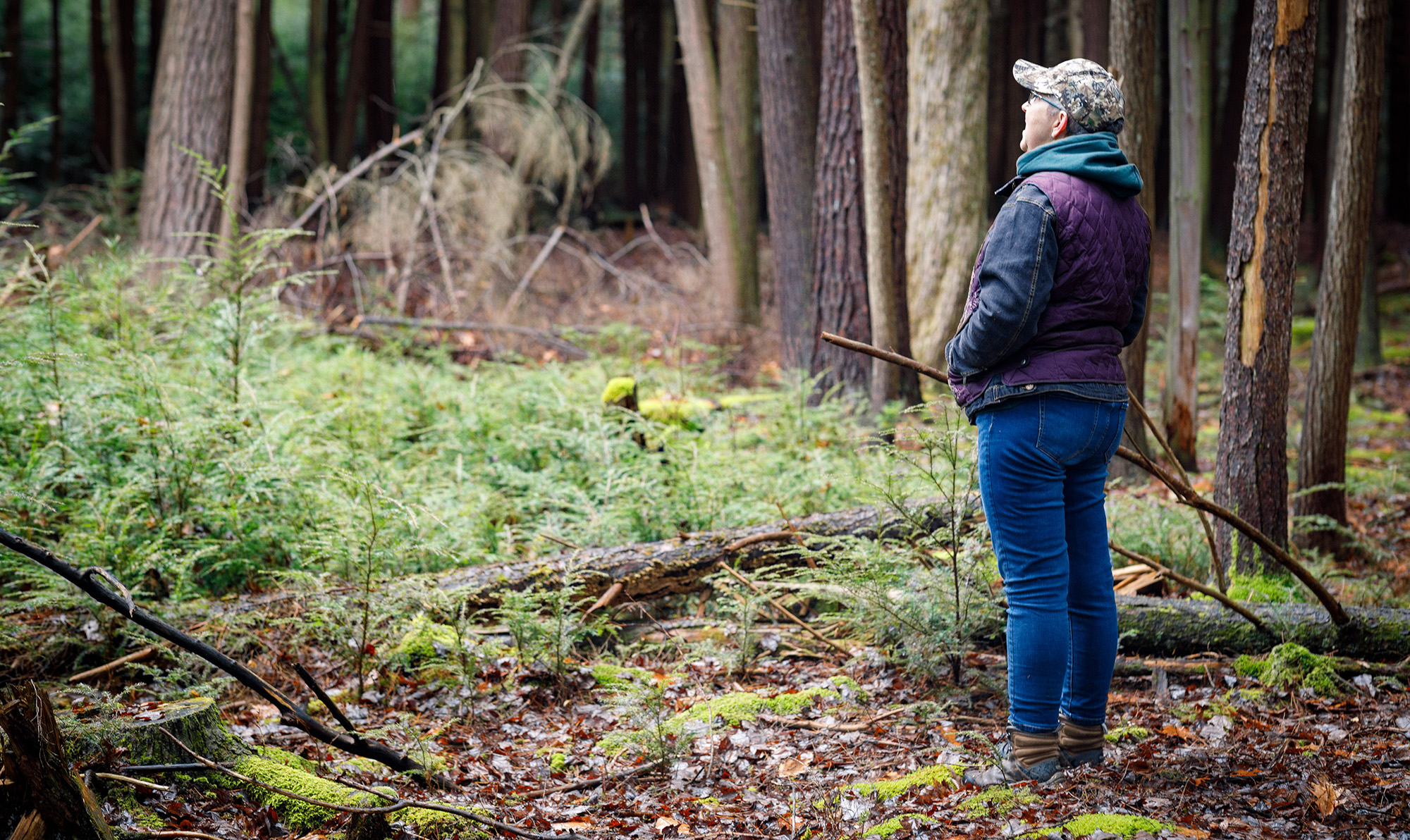 The tech sector is emerging as a big champion of trees — not just in planting them, as Salesforce is doing as a big backer of the Trillion Trees Initiative, but in conserving existing forests.

Last fall, HP Inc. partnered with the World Wildlife Fund to create Sustainable Forest Cooperative, a five-year "forest positive" effort to use its fiber sourcing power as a means to help protect forest ecosystems. (One ally in that effort is International Paper, which sources more than 7 million tons of "responsibly sourced" fiber annually cerified by the Forest Stewardship Council.)

Microsoft is also talking up nature-based solutions as part of its "carbon negative" commitment, although it hasn’t publicly announced specific projects tied to that pledge.

Apple’s approach to sustainable forest management is multifaceted, but it also includes a pledge to protect enough working forest acreage to offset the virgin paper footprint related primarily to its product packaging. That includes a relationship with the Conversation Fund (the Fund), a nonprofit that uses innovative financing programs to acquire working forestland being developed according to specific economic and environmental goals.

Together, the two organizations are permanently protecting more than 36,000 acres. They’ve done this by placing conservation easements on the land, which restrict the conversion of those acres to non-forest uses. It’s a strategy that the Fund uses with all the land it helps acquire, said Larry Selzer, CEO of the Conservation Fund.

There is no other strategy that achieves this kind of clear sightline into the permanent outcome.

"There is no other strategy that achieves this kind of clear sightline into the permanent outcome," he said.

The Fund’s long-term goal is to protect up to 5 million acres in the next 15 years, and it does this by making large-scale purchases of land that’s coming onto the market — often being sold by institutional investors. Selzer said protecting forest owners at both ends of the market is important. "Each of these farms is struggling to generate income. This is a real shot in the arm," he said about Amazon’s commitment. "Protecting small ownership has to be part of the solution."

One financial mechanism the Fund is using to work toward that goal is the $150 million green bond it issued in September with underwriter Goldman Sachs. So far, about half of the funds have been allocated, protecting an additional 130,000 acres, he estimated. The bond is being used to attract philanthropic capital for more leverage.

Aside from its ongoing Apple relationship, the Fund has longstanding partnerships with Dell and with U-Haul. "I think companies now are evolving into a real leadership role where they are not just about making philanthropic gives, they are looking at being investors," Selzer said. "They want to solve problems. This is what they do best."