You would think that insurance companies would be experts in minimizing risk and reducing exposure to catastrophic natural disasters.

But a recent report suggests that the vast majority of insurance companies are not factoring in climate risk when it comes to their investment decisions.

Just one out of every eight insurance companies is taking tangible action on protecting their portfolios on climate risk, according to the Asset Owners Disclosure Project’s (AODP) annual Global Climate 500 Index, which analyzed 116 insurers with $15.3 trillion of investments.

The report also found that only 1 percent of those insurance companies assess the emerging risk of stranded assets, or the risk that carbon assets will become "stranded" in part due to future regulations on fossil fuels and growing demand for renewable energy.

Most of all, the report finds that insurance companies pale in comparison to how pension funds are evaluating climate risks such as climate change and drought. 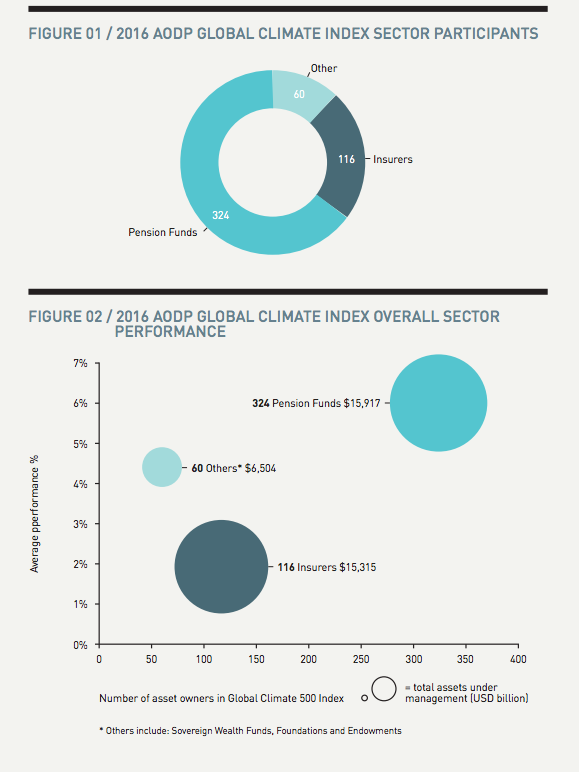 But why do insurance companies fall behind pension funds when looking at climate risk investments, and why are they so seemingly uninterested in investing in low carbon solutions?

"Pension funds in recent years have been driven by a small percentage of active members to review their management of climate risk," said AODP CEO Julian Poulter. "This accountability does not exist for insurance companies who don’t have members, who are mainly listed and whose shareholders have been slow to hold them to account."

The AODP ranks insurance companies on how well they are assessing these risks on with their own ranking system from AAA to D, and companies that have shown no signs of any action are referred to as laggards and are given the ranking of X.

Out of the 116 insurers analyzed by the AODP, 48 companies showed no evidence of doing anything to protect their portfolios from climate risk. This totaled $4.2 trillion assets under management.

Insurance companies pale in comparison to how pension funds are evaluating climate risks such as climate change and drought.

The report also highlights a recurring theme when it comes to evaluating climate risk and bracing for the financial impacts of climate change — European companies, by and large, are far more prepared than American companies.

European companies account for 11 of the 14 insurers that are taking tangible preparations on these risks, according to the report.

Poulter says one reason for this is that industry leaders in Europe are more collaborative and that the political climate is different in Europe and the U.S.

"Europeans don’t suffer from the political climate change 'hot potato' issue where portfolio leaders in pension funds have taken career and reputational risk to be different to the norm and the market. U.S. funds acting on climate change face bigger barriers because of this," said Poulter.

Nonetheless, a quarter of European insurers still have shown no evidence of doing anything tangible to protect their portfolios from climate risk, leaving $730 billion unprotected, which accounts for 10 percent of regional insurance assets. 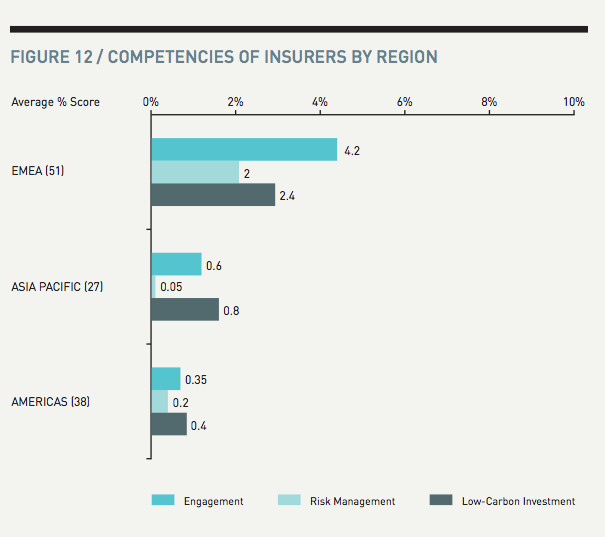 Comparatively, 61 percent of insurance companies are taking no action on climate change in the Americas, which totals $954 billion or 32 percent of regional insurance assets.

The only insurer to receive an A rating in the index from ADOP was British firm Aviva, factoring in engagement on climate risks, investing in low carbon investments and risk management. Most insurers received a D, totaling 54 companies with $7.5 trillion assets under management.

Insurers fared the worst in in the category of risk management, averaging a score of 1 percent in this category.

Additionally, only 5 percent of the insurance companies analyzed by the AODP are measuring carbon emissions in their portfolio compared with 13 percent of pension funds.

One contributing factor for the low scores in risk management is that insurers are abstaining from looking at the potential risk of stranded assets in their portfolios. 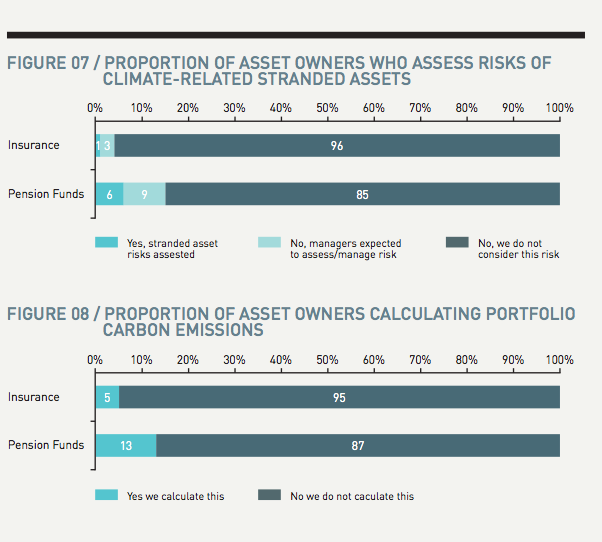 According to a 2015 report by the financial think tank the Carbon Tracker Initiative, the fossil fuel industry could waste investments of $2 trillion by 2035.

While the risk of stranded assets, or that trillions of dollars in carbon reserves will become unburnable, has been a conversation of debate, virtually no insurers are even considering this a risk in their investment decision.

The ADOP found that just 1 percent of insurers are assessing the risk of climate change-related stranded assets, compared with 6 percent of pension funds.

In a speech in October, the governor of the Bank of England, Mark Carney, warned investors about a potential "carbon budget" where possibly only one-third of the world's carbon reserves would be burnable, according to the Financial Times.

"If that estimate is even approximately correct, it would render the vast majority of reserves 'stranded' — oil, gas and coal that will be literally unburnable without expensive carbon capture technology, which itself alters fossil fuel economics," said Carney.