Why are so many veterans serving in the solar industry?

Liz Perez's dad served in the first Gulf War. And after she enlisted in the Navy and found herself in the second one, "it made me ask a lot of questions about why we were here in the Gulf again."

In her role as a logistics officer, she bought a lot of fuel. She saw air conditioning units in the desert powered by gas-guzzling generators. "When I got back in 2006," she said, "I knew something needed to change and I wanted to be part of the solution."

Like an increasing number of veterans, she got into solar power. In fact, veterans make up 9.2 percent of the almost 143,000-member workforce, compared to their 7.6 percent of the workforce nationwide, according to a report released last month by the Truman Project's Operation Free and the Solar Foundation.

The U.S. solar industry has grown dramatically across the country in recent years, creating tens of thousands of new jobs along the way. The Solar Energy Industries Association 2013 year-end statistics show that the U.S. installed 4,751 MW of solar PV in 2013, up 41 percent over 2012 and nearly 15 times the amount installed in 2008. Twenty-nine percent of all new electricity generation capacity added this year in the U.S. came from solar — with seven states getting 100 percent of their new generation from solar.

This strong industry growth is a direct result of a federal policy known as the solar Investment Tax Credit (ITC), one of the most important policy mechanisms to support the deployment of solar energy in the U.S. The ITC works by providing a 30 percent tax credit for solar systems on residential and commercial properties. The long-term stability of the ITC is a key policy tenet that NRDC and a wide-ranging group of industry, labor and investor voices successfully advocated for in 2008. It has provided business certainty to project developers and investors that has in turn scaled up the industry and reduced costs to make solar a competitive energy supply option for utilities, consumers and "pro-sumers." We are now six years into the multi-year ITC extension with an expiration date that's closer than you might think: 2016, or only about two and a half years from now.

In addition to the impressive U.S. domestic solar market growth and newly created jobs thanks in large measure to the ITC, it is solar energy's contribution toward solving our global climate disruption crisis and enhance domestic energy security and resiliency (PDF) that makes it especially attractive to veterans.

We talked to veterans working at all levels of the solar industry and here's what they told us:

1. Veterans view climate change as a threat to national security. Working in solar is one way for them to continue in their service as defenders of our nation.

Every veteran we interviewed saw things that way. "Anything we can do to curtail global warming is absolutely in the interest of every person in the United States and every person in the world," said Geoff Harjo, an Army veteran deployed once in Iraq and twice in Afghanistan. He now works as a Mission Continues fellow at GRID Alternatives, a nonprofit organization that puts solar panels on low-income families' homes. (The Mission Continues is a similiarly great nonprofit that helps vets re-adjust to civilian life through "innovative and action-oriented [community] programs.") 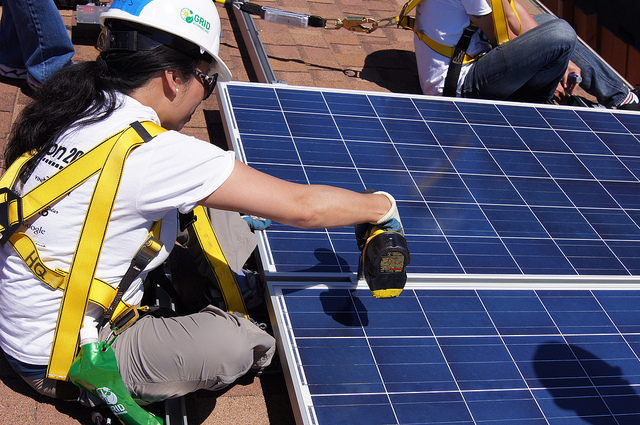 2. Energy independence — especially a reliance on clean, domestic sources of power — is vital for our country's security.

"With solar energy and energy conservation, we don't have to go to war over resources," explained Perez, owner of GC Green, a renewable energy and energy efficiency contracting and consulting firm in San Diego.

Ted O'Shea, an ROTC grad and former Army artillery officer who now heads up the solar program for ABM’s Energy business, concurs. "To develop a sustainable, renewable, clean form of energy allows us to be independent from these fossil-fuel nations," he said.

3. Working in solar allows veterans to continue their powerful experiences of service to the nation.

While in the military, many active duty personnel experienced a sense of calling. "You feel like you're an ambassador for your nation," said Harjo. But after leaving active duty, "Who are you now?" he asks.

Solar helps remedy the loss. "I know this sounds corny," said Scott Wiater, president of the Rockville, Md.-based solar developer Standard Solar, "but in the military I felt I was doing something to improve the greater good. I lost that when I left. But now I get that feel-good sense every day when I come to work, because I feel like I'm doing something good for the planet and fighting climate change."

Harjo adds, "I wouldn't want to be that touchy-feely about it, but working in solar does fill the hole in your heart."

4. Solar and veterans are a good fit, because many skills vets learned in the military are just the skills they need to thrive in the solar industry.

Chris Turek, director of online and educational services at Solar Energy International, a Carbondale, Colo. education and training provider, spent eight years in the military, including time in an M1A1 armored tank division. He calls veterans and solar "a natural fit."

Many skills the military cultivates are important for work in the solar field, he said: "You work in teams. You collaborate on projects. You have a sense of responsibility in dealing with very expensive equipment."

Every veteran we interviewed shared that view. "If a woman veteran is considering getting into the solar field," said Perez, the Navy vet — and, sadly, women are poorly represented in solar, making up only 19 percent of the workforce — "I tell her it's just like what we did in the military. We're trained to get a lot of information in a short amount of time and go out and perform."

To begin with, training in the solar field is increasingly available through the post-9/11 GI bill. At Veterans Administration-approved programs, it can cover as much as 100 percent of the cost of tuition, books and housing. Moreover, there's some talk in the industry of creating a web platform that can link veterans interested in solar with employers who can benefit from their skills and sense of mission.

That said, solar power job opportunities are threatened if Congress doesn't act to expand ITC eligibility rules. A bi-partisan proposal recently was brought forth by U.S. Senators Michael Bennett (D-Colo.) and Dean Heller (R-Nev.) to revise the eligibility requirements for solar projects using the ITC from the point at which the project concludes construction to commencement of construction. Because the timelines for solar projects vary and can be uncertain, this policy change is critical to solar developers who are worried their projects will not be completed by the time the credit expires. The Solar Energy Industries Association estimates that the commence construction change would help drive 4,000 more megawatts of solar capacity in 2017 and 2018, and would create tens of thousands of additional new domestic jobs.

With any luck, the fast-growing solar field will continue to serve as a haven and a springboard to success for America's veterans. They face high unemployment rates and other challenges as they return to civilian life. And they bring with them the important perspectives they learned during their years of military service — perspectives we should heed as we assess our nation's security and our energy future.

See all by Pierre Bull