When the United States renewed funding for Advanced Research Projects Agency-Energy (ARPA-E) on March 23 despite a proposal to defund this energy-innovation agency, what galvanized support for this decision? Two reports published in 2017 by the National Academies Press (NAP) and Information Technology & Innovation Foundation (ITIF) showed why the agency plays a quiet but energetic role that moves industries forward.

"We’ve been interested in ARPA-E as an approach to energy innovation for a long time, partly as a critique of how the United States Department of Energy (DOE) runs its energy-evolution projects," said David Hart, senior fellow at ITIF and professor of public policy at George Mason University’s Schar School of Policy and Government.

"The DOE tends to be either focused heavily on the basic research end or focused at the very mature end of the technology spectrum," Hart said. "So there was a gap in taking ideas that have potential to affect the technology system and bringing them to maturity."

What do the reports recommend?

Continuing and expanding the agency’s funding is a central conclusion of both reports.

However, the fact that the agency was considered unnecessary by the Trump administration indicates that better outreach is needed to show what accomplishments are taking place, according to the ITIF report.

ARPA-E needs to do a better job of communicating with non-technical audiences, according to the NAP report "An Assessment of ARPA-E." This should include active outreach about its impacts and metrics.

Both reports say substantial benefits can be gained by infusing ARPA-E’s highly adaptable practices into the DOE’s less-flexible structure.

But the researchers said ARPA-E’s energizing approach does not work for the entire DOE — just for some parts of it.

Power-grid innovation can be a minefield of complex decisions. Data and technology issues combine with structural problems to make changing the grid quite complicated.

The reports advocated for expanding ARPA-E’s budget, maintaining its approach and autonomy and reauthorizing its funding. The authors also recommended leveraging oil and gas royalties from federal lands to support it.

The American Energy Innovation Council has recommended expanding ARPA-E’s budget toward a $1 billion target, according to the ITIF report. This council includes Bill Gates, founder of Microsoft, and a small group of industry leaders. This target initially was recommended by a 2005 report from NAP.

"Energy innovation covers a vast domain of applications. ARPA-E has touched many… Yet there are many more 'white spaces' that have not been adequately explored," the ITIF report said.

ARPA-E engages in systematic risk-taking that is supported by a reliable and flexible project management structure. This includes frequent conversations with grantees.

The NAP report recommends that the agency put together a document showing the lessons it has learned. It said the agency is catalyzing positive changes within DOE and other organizations. Its best practices are already being shared to some extent.

The agency’s technology-to-market (T2M) activities are viewed as experimental and challenging, the NAP report said.

Why Is ARPA-E valuable?

Energy markets do not function very well from an economic standpoint, according to the ITIF report. Capital-intensive industries are difficult for innovators to access and alter. These industries tend to have incremental innovations that are adopted with a protective attitude. For instance, the electric-power industry can be relatively hidebound due to its regulatory requirements and efficiency disincentives.

According to a figure ITIF quoted from International Energy Agency (IEA), oil, gas and electric companies all spend only 0.25 percent of their revenue on research and development per year, on average.

Power-grid innovation can be a minefield of complex decisions, as Clean Energy Finance Forum’s Electricity Evolution series describes. Data and technology issues combine with structural problems to make changing the grid quite complicated.

What has ARPA-E accomplished?

"As of February 2017, for instance, 580 ARPA-E project teams, which received a total of approximately $1.5 billion from the agency, had formed 56 new companies and raised more than $1.8 billion in private-sector follow-on funding to continue to advance new technology toward the market," the ITIF report stated.

The regression analysis below shows the results of the ITIF research. "We find that ARPA-E-funded firms, on average, raise more money than other clean energy startups," the authors said.

The table below shows statistical success differences that vary based on companies' ARPA-E participation, years founded and hardware configuration. The p values indicate the probability of the results occurring when a null hypothesis specifies no initial difference, according to Statsdirect. 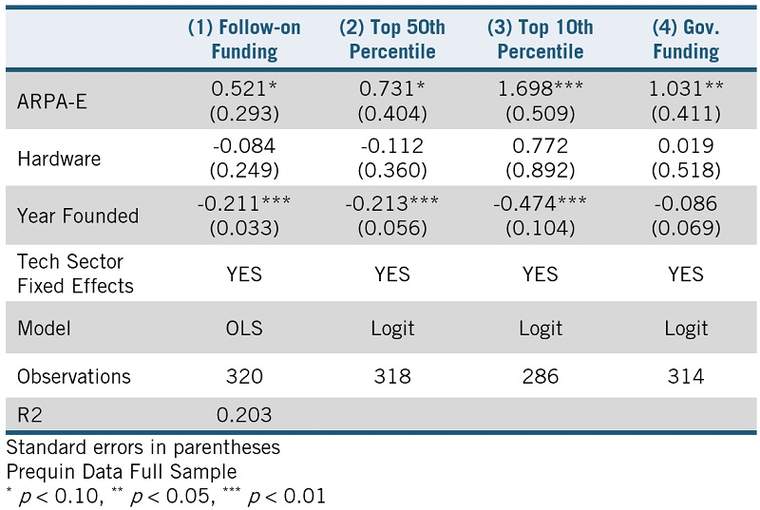 ARPA-E also hosts a yearly summit that attracts experts who are looking to move the field forward.

"The summit has been building a community to push the agenda," Hart said. "Within each program, one of the goals is to build a community around a specific set of technical challenges. I think the summit does a great job of bringing those people together and allowing them to conceptualize the problems. It’s a very useful event."

The ITIF researchers took a skeptical approach to make certain that they were not overstating ARPA-E’s successes.

"It is possible that ARPA-E selects better candidates for follow-on funding to begin with. Our control variables help to address this objection," the report said. "The likely interpretation of these findings is that ARPA-E-funded firms have an advantage over other firms because their ARPA-E funding has enabled them to reduce the level of technological uncertainty and helped to signal the quality of the technology to potential investors."

Which technologies is ARPA-E advancing?

"The biggest one we focus on in the paper is energy storage," Hart said. "ARPA-E has done a number of targeted programs in that area as well as funded proposals that they’re doing through their open process. They’ve funded a wide range of different storage technologies."

Energy storage cumulatively has accounted for 10 to 15 percent of ARPA-E’s funding, ITIF’s report said. This has moved that industry forward substantially in the past eight years.

According to ITIF, the largest constraint transportation and electric power systems face is "the inability to store electricity at a reasonable cost."

Storage can cushion the fluctuations of renewable energy, increase the reliability of electricity, reduce the likelihood of brownouts and make electric vehicles more competitive.

Hart said the agency also has funded grid design, energy efficiency and transportation technologies — and is also looking into nuclear fission and fusion.

Yale Center for Business and the Environment

VERGE Boston: How ARPA-E creates the future of energy