When rocket scientist K.R. Sridhar founded the technology startup that would become Bloom Energy in 2001 — and famously introduced its electricity-generating "box" to the world in 2010 during a "60 Minutes" segment — his inspiration was a photograph snapped from outer space illustrating the vast swaths of planet Earth still in the dark, unconnected to the electric grid.

He mused then, as he does now: If scientists could generate power for equipment on far-flung planets such as Mars, why can’t they light up rural communities here on Earth? "In a digital world, electricity, like food and shelter, is a human need," said Sridhar, Bloom’s chairman and CEO, during a relatively rare formal media briefing last week at the company’s Sunnyvale, California, headquarters.

Almost 20 years later, that worldview looms large on a wall in the now-public company’s corporate briefing room. It’s a not-so-subtle reminder of Bloom’s long-term mission "to make clean, reliable and affordable energy for everyone in the world."

Right now, however, the company’s short-term concern is convincing high-profile commercial and industrial accounts to buy the Bloom Energy Server (the fancy name for its fuel cell technology) to reduce their reliance on the traditional grid. Bloom's solid oxide fuel cells generate electricity through an electrochemical reaction, rather than through a combustion process, which distinguishes its approach from on-site cogeneration options.

In the past year, it has scored some impressive wins, such as a contract with the world’s largest internet co-location company, Equinix. Increasingly, the company has forged lucrative deals with utilities including Southern Co., Constellation and Exelon. "Utilities are emerging as some of our very best partners," said Matt Ross, executive vice president and chief marketing officer of Bloom.

Bloom's scale is still relatively modest. During the third quarter, which ended Sept. 30, Bloom reported a net loss of $78.6 million on revenue of $190.2 million, which was at the "mid-point" of its sales estimates. In its investor update, Bloom said it closed a record 206 "acceptances" during the three-month period. While more than half of Bloom’s business comes from new accounts, long-time clients such as Intel, The Wonderful Company, eBay, Apple and Walmart continue to add new Bloom energy servers, according to a corporate presentation distributed to reporters.

We are experiencing a post-climate-change world. You need to address electricity not in a single dimension, but in many: reliability; resiliency; sustainability.

"The issue is not about renewables, it’s not about fossils, it’s about emissions," Sridhar said. "Whether we like it or not, we are experiencing a post-climate-change world. You need to address electricity not in a single dimension, but in many: reliability; resiliency; sustainability."

The next update to Bloom’s technology, coming online in early 2019, will continue to improve the generating capacity it can provide within the same footprint — its engineers cram more megawatts into each successive generation. In a strategy borrowed from the high-tech industry, Bloom is focusing on ways it can integrate its platform with other components, such as energy storage, and inverters that allow it to be installed alongside solar equipment.

What’s more, the company is actively testing a module that will help its energy servers run more efficiently on biogas by "scrubbing" the gas of contaminants. About 9 percent of Bloom's installed servers already run on biogas, but the company's broader support of this option is meant to help assuage naysayers concerned over the company’s reliance on natural gas as a fuel source.

Eventually, better support for biogas could be the missing link that helps open doors for Bloom’s technology in rural regions around the world — at least, that’s the hope of Bloom’s founder. "There are enormous sources of biogas that we have not exploited. This is different from biofuels," Sridhar said, pointing to one possible scenario in which small hamlets, villages or communities could create small microgrids powered using local waste sources such as animal manure, human excrement or plant refuse. Individuals and businesses could "pay by the drink" for the electricity they use, in much the way many people in emerging nations are adopting mobile phone technology, he predicted.

One issue remains the distribution link: it's incredibly expensive to "pipe" biogas across a region to a central location. That's why Bloom is advocating an approach that would see its equipment colocated at capture sources. 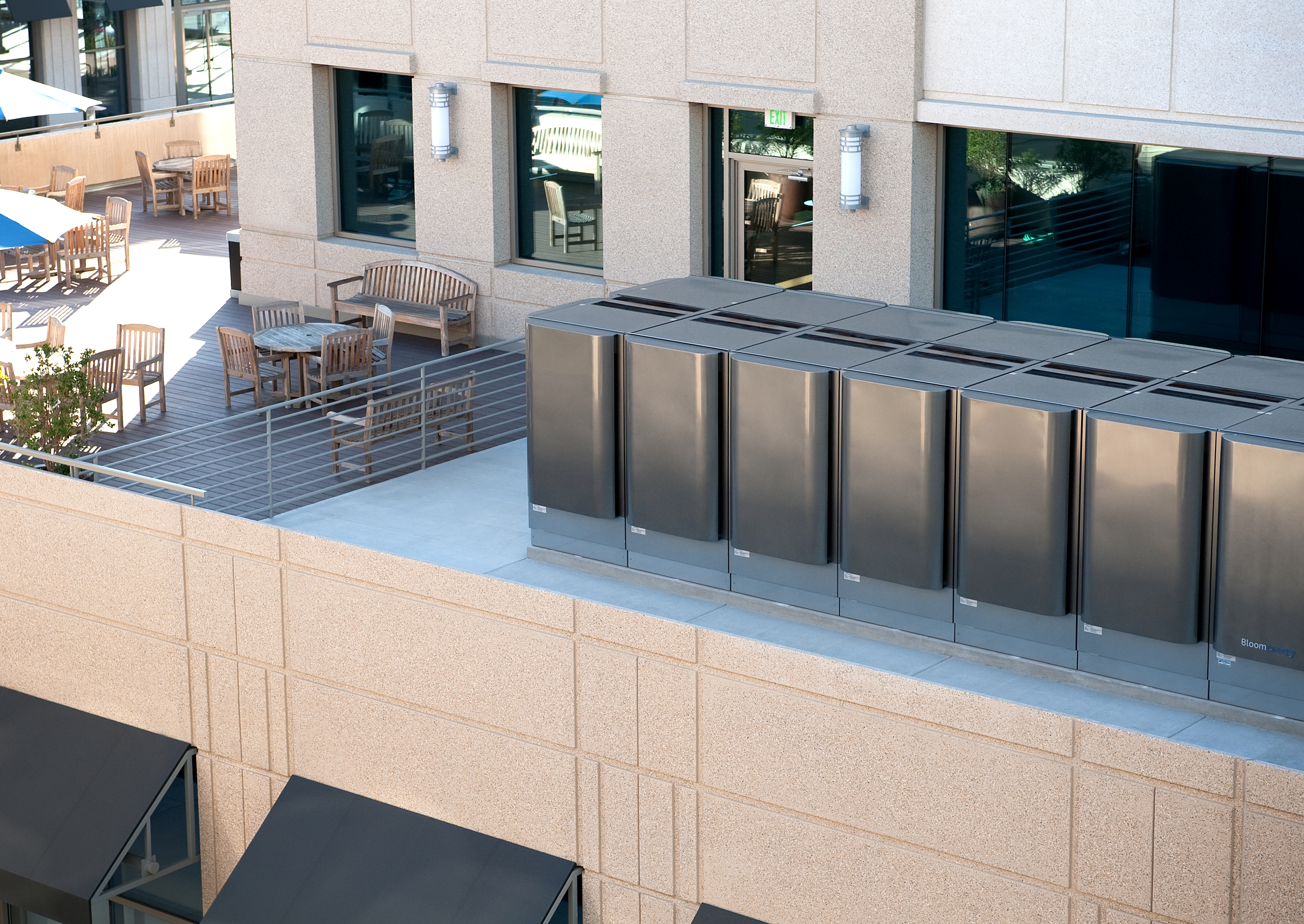 Here’s how Bloom plans to differentiate itself

Meanwhile, though, Bloom is out to make its mark in the commercial world. During the series of presentations in mid-December, Sridhar and other members of the Bloom executive team touted several factors that they say help the company close deals for its fuel cells. Chief among them:

All this is important because Bloom typically has relied heavily on incentive programs to help subsidize the cost of its installations. The February 2018 update (PDF) of the federal investment tax credit could help boost its value proposition, but the executive team’s focus is on reducing costs enough for that to be a non-factor. Its utility relationships could also help its would-be customers tap into funding help. Now that it’s public, investors and would-be customers will have a view into whether Bloom can deliver.

The density compared with on-site solar installations: A 250-kilowatt system is about the size of a shipping container. It typically takes 125x the space to generate as much power with solar photovoltaic.

The GHG proposition: The company claims virtually no nitrogen oxide, sulfur oxide or particulate emissions. That doesn’t address the methane leakage issue associated with natural gas production and distribution. But Bloom’s argument is that its technology emits 60 percent less carbon dioxide than the typical baseload options available on the U.S. power grid. The company is also hard at work on a biogas clean-up module that will help Bloom servers use biogas produced by landfills, wastewater treatment plants and agricultural operations.

The uptime promise: A distributed Bloom server installation can be maintained without the entire system being taken offline, which isn't the case for things such as co-generation equipment. Plus, it can be connected directly at a site, which reduces a company’s reliance on the grid transmission system.

During presentations in mid-December, Sridhar and other Bloom executives touted several factors that they say help the company close deals for its fuel cells.

Jim Cowell, vice president of facilities for the California Institute of Technology (Caltech), which generates about 90 percent of its annual 120 gigawatt-hour power consumption on site, uses Bloom technology for about 21 percent of that electricity. (That’s 3 MWs so far.) During the eight years Caltech has been using the servers, they’ve never been offline, he said. The university’s new neuroscience research building, slated to open by 2020, will use 1 MW of Bloom’s technology as its primary generation source. That will bring Caltech's installations up to 4 MW of capacity.

One place you can expect to see Bloom ramp up its sales outreach during 2019 is in microgrid installations — the company is positioning its technology as both a viable standalone option as well as something that can be integrated cost-effectively with solar and energy storage. And unlike many microgrids powered by renewables, Bloom’s technology can help negate the need for a diesel backup generate, according to the company.

In late August, for example, the company disclosed a deal with manufacturer JSR Micro. The contract covers a 1.1 MW installation that JSR will use as its primary power source.

Another thing to watch in 2019: Bloom’s relationships with utilities. It’s already actively working with at least a half-dozen including Consolidated Edison, Constellation and Delmarva Power (both Exelon subsidiaries), Eversource and Southern.

Under the Southern deal, for example, Bloom Energy Servers are being combined with energy storage technology from Southern subsidiary PowerSecure to provide on-site generation to customers like the Home Depot. In this instance, you can think of Southern as a sales channel.

In New York, ConEd has been using Bloom’s technology as part of the Brooklyn Queens Demand Management Program, an initiative that has been using fuel cells (among other technologies) to help defer the $1.2 billion capital expense associated with building another substation for the region. Instead, the utility deployed a combination of rooftop solar and fuel cells at a housing project to generate more onsite power for the surrounding neighborhood. It set aside a budget of about $200 million to help customer fund onsite investments in both generation and energy efficiency measures.

A 1.8-MW installation of Bloom fuel cells also was used to accommodate about 45 percent of the base load required by a major new, 342-bed medical center. The center received a $1.3 million incentive to help fund the project; over the 15-year contract, Downstate expects to see its cost of electricity decrease substantially.

What stands in the way of Bloom's progress? The most obvious obstacle is the company's current reliance on natural gas as a fuel source. Not only are its installations dependent on the availability of distribution infrastructure, but Bloom also likely will be called upon more often to discuss how it handles methane, a super pollutant associated with natural gas and biogas that is a more potent contributor to global warming than carbon dioxide.

The company also continues to face many questions regarding the expense of its fuel cells and its ongoing reliance on financial incentives to get deals done — many of its big accounts are in California, in large part because of the generous incentive program that has been in place there in the state. There's also the question of how it will handle the disposal of aging technology. The latter is an issue in Delaware, for example, where the company hopes to swap out old fuel cells in favor of its newer, more efficient editions.

This story was updated Dec. 20 to clarify the size of the Bloom system.