Despite all the shouting in Congress about how constraining carbon emissions could harm business and jobs, an interesting call emerged from the business community in recent months: They're asking for policies that reflect the cost or price of emitting carbon.

A price on carbon would add certainty to decisions around cutting emissions and unleash more investment into the low-carbon economy, experts say. Hundreds of companies already have made that calculus privately.

CDP reported during the U.N. climate talks in December that more than 1,000 companies disclosed in their 2015 reports to CDP that they either have implemented a price on carbon for internal decision making or they plan to do so in the next two years. CDP called this (PDF) "a number that was unthinkable just a few years ago."

Those who already have in 2015 include 97 U.S. and Canadian companies — double the number from a year earlier — and spanning industry types from car maker General Motors to oil giant Exxon Mobile and entertainment conglomerate Walt Disney.

Also, what had been 13 U.S. companies committing in July to the American Business Act on Climate Pledge, supporting a transition to a low-carbon economy and backing carbon constraints, ballooned to 154 companies by December.

A few weeks earlier, Accenture Strategy and the U.N. Global Compact said the vast majority of CEOs who are part of its Caring for Climate business leadership initiative "believe that carbon pricing is an essential tool in accelerating action on climate change."

And according to a survey of the GreenBiz Intelligence Panel, 75 percent of some 377 companies responding to a wide-ranging survey this fall on how Businesses React to Climate Change indicated that a mandatory price on carbon either would help their organizations or at least not harm it.

39 percent of respondents (to a GreenBiz Intelligence Panel survey) thought a mandatory price on carbon would benefit their companies.

Only 24 percent of large companies and 18 percent of small and medium companies indicated they thought a mandatory price would be harmful to their organizations.

"This is really interesting and very encouraging," said Owen Smith, director of global energy policy and strategy at Ingersoll Rand, which co-sponsored the research with GreenBiz, discussing it on a webcast last month.

John Davies, the GreenBiz vice president and senior analyst who led the research, pulled out that fact about carbon pricing attitudes as the most interesting finding from a wide range of questions about what businesses do in response to climate change. 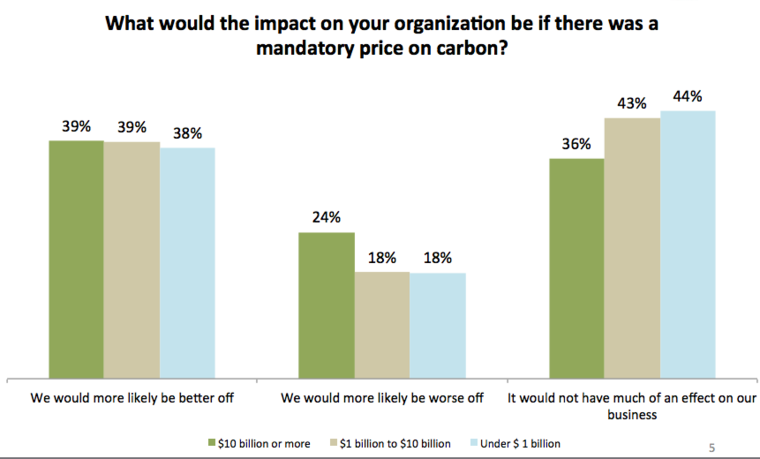 Granted, the GreenBiz Business intelligence network "skews green" as Davies pointed out and is not a random sampling of, say, Fortune 2000 companies. Still, that four out of 10 companies thought a carbon price or cost would be beneficial was noteworthy. Later in the survey, respondents indicated they could see opportunities for differentiating their products and services by their lower carbon footprints.

Clearly the tables have turned since Congress considered cap and trade in 2009 and the proposal was dead on arrival. Things have changed even since November, when Congress vocally lambasted the Clean Power Plan as a job killer and voted to nullify it. (The action is expected to have no force and be vetoed by President Barack Obama.)

Around the world, the World Bank points out, about 40 nations and 23 cities, states and regions have implemented carbon pricing programs such as cap and trade or carbon taxing or are in the works of doing so. In a global economy, U.S. based companies put themselves increasingly at risk by not accounting for costs and opportunities that companies elsewhere do. In December, a number of business and government proponents formed the Carbon Price Leadership Council.

In the U.S., California's roaring economy has debunked the theory that mandatory constraint of carbon emissions will hurt businesses and kill jobs. California has had a carbon cap and trade system for four years. Yet economic data shows California has been creating businesses and jobs at a much faster rate than the nation as a whole. New business creation rose 11.4 percent in California since 1995 while nationally business creation rose 10.1 percent, according to calculations by Beacon Economics and Next 10 using U.S. Census Bureau data.

Job creation in California is up 4 percent compared to the nation’s 2.4 percent over that time, Beacon and Next 10 found.

Why businesses now want a price on carbon

While California's story presents macro-economic evidence that a price on carbon is not a death knell, Ingersoll Rand’s Smith said there are reasons why a mandatory price might be seen as beneficial to individual companies.

"One is risk mitigation," he said on the webcast. "A lot of companies for quite a while now have been proactively planning for carbon constraints, so they are pretty well positioned." They see it coming, and consumers and investors are increasingly favoring companies that minimize their carbon output. Business is ready to get on with it.

Many companies no longer suspect a mandatory price would be a burden because there are so many solutions to reduce an organization’s carbon footprint. Some, such as energy efficiency — the first approach most companies take — have proven to also "enhance the efficiency of operations," and therefore save money.

A third reason why businesses see potential gain from a mandatory price on carbon is the opportunity to be a solution provider.

"Companies are seeing that by stepping out and becoming solution providers to help corporations reduce their climate footprints" is a great opportunity, Smith said. Doing so is "certainly one of the things we see as an opportunity for our company." Ingersoll Rand, which provides industrial HVAC equipment, refrigerants, air compressors and electrical sports vehicles, has committed to halve the carbon footprint of its HVAC products in five years.

A fourth reason, said Davies: "Companies are just looking for certainty and a level playing field and if you’ve already taken a lead in reducing emissions, then it is likely your organization could end up in a much better competitive position (with a mandatory carbon pricing) and this could be rewarded not just by profitability but even share price."

Nonetheless, survey responses indicated that very few companies price carbon internally. Only 9 percent of the large companies (over $10 billion in revenue) and only 4 percent of the small and midsize ones use a price on carbon for internal accounting and decision making.

One way to sell a tax on carbon: Cut other taxes