California has extended its system to price carbon, an initiative that has inspired significant emissions cuts, after building bipartisan support. So far, the idea has sprung up in 50 jurisdictions around the world.

Requiring organizations to pay a price on their carbon emissions is widely believed to be the only way to induce the world to significantly cut the amount released into the atmosphere. Republican former statesmen, liberal environmental groups, NASA scientists and large corporations all agree on this point.

Some favor so-called carbon taxes. But taxes are notoriously unpopular in the United States. So instead, the market-based system of "cap and trade" was the favored approach by some early adopters: the nine Northeastern states in the Regional Greenhouse Gas Initiative and California. Outside of the U.S., the European Union also launched a cap-and-trade emissions trading system, while carbon taxes have been imposed in about a dozen countries.

But lately, the scales are tipping to cap and trade. Some 50 jurisdictions have emissions trading systems in place. "Over 1 billion people live in those areas and that 1 billion will double when China launches the nationwide cap-and-trade," said Nathaniel Keohane, vice president for global climate at the Environmental Defense Fund.

And last week, California legislators gave bipartisan approval to a bill to extend the state's cap-and-trade program to 2030, which Gov. Jerry Brown signed into law Tuesday.

You could argue that after 27 years of conversations about cap and trade since the idea was first introduced during the George H.W. Bush administration, the system has found its moment. Even as the Trump administration dismantles environmental protections and dismisses climate as a liberal issue, more states and countries are taking action to curb emissions through cap-and-trade and even Republicans have voted to stem emissions this way.

California's bipartisan vote that included eight Republicans — and the fact that California's economy has flourished in the 4.5 years that cap and trade has been in place — may serve to galvanize support for building similar systems elsewhere.

"We think cap and trade as a mechanism is vitally important. It has proven itself here in California, and it’s helped to promote the viability of carbon reduction,” said Steve Malnight, senior vice president for policy and strategy at Pacific Gas & Electric utility.

The vote to extend cap and trade in California "maintains a cost-effective approach to achieving our climate goals," and at the same time "sends a signal to innovators around the world that California is open for business," he said.

The way cap and trade works is that regulators set emission caps on large emitters such as manufacturers and utilities but leave it up to them to figure out how to meet the cap or buy allowances to emit more than their cap. Efficient companies that reduce emissions below their caps can sell their extra allowances. Or allowances can be bought in state-run auctions.

In the years since California’s cap-and-trade system took effect, it's significant that the state has received nearly half of all clean tech investment dollars from venture capitalists. (The first auction in California’s cap-and-trade system began in November 2012.)  The state's GDP has surged and unemployment has fallen way below the national average. 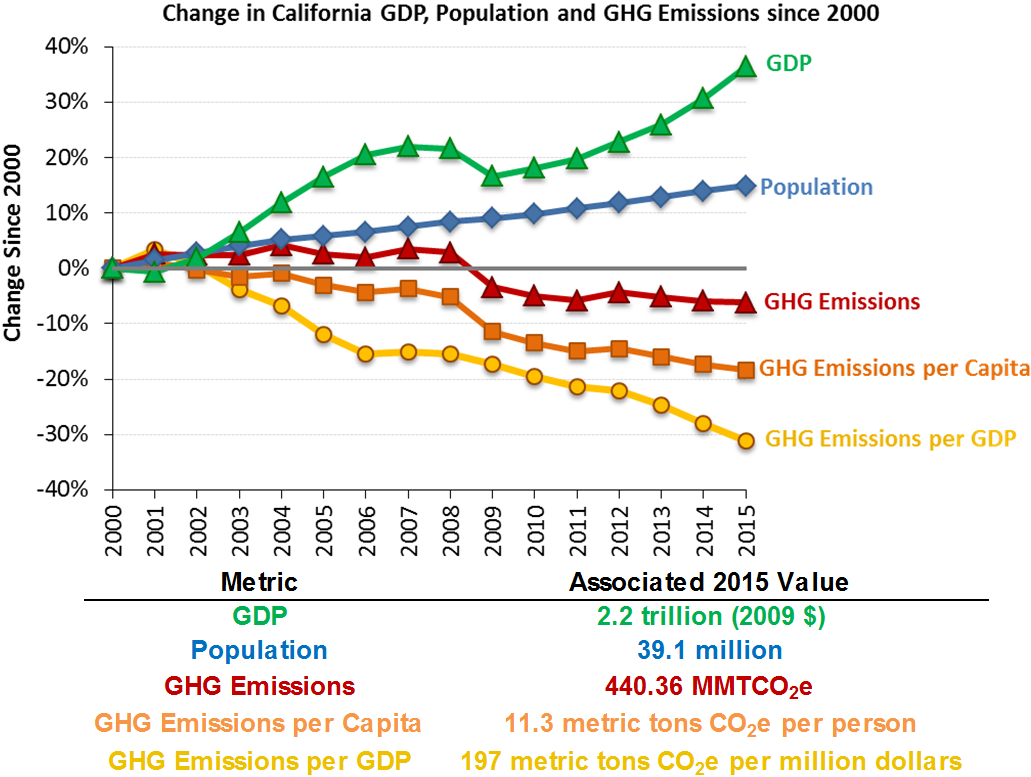 Between 2011 and year end 2016, startups in California’s major metropolitan areas attracted 45.4 percent of all U.S. clean tech venture capital investment, an amount worth $15.35 billion, according to a study by the Brookings Institute.

The cap-and-trade system has provided the market framework to incentivize these startups and this investment, many argue.

"Innovators across the nation are looking to California," Malnight said, addressing the attention that the legislature’s cap and trade extension vote is generating. "I think this is another signal to the world that California is open for business for clean energy."

The state also has collected some $4.4 billion in auction revenues, which have been invested in mass transit, including a high-speed rail project, as well as affordable housing near transit centers and programs to assist low-income homeowners with weatherization and solar installations.

So what does one state’s legislation mean for the rest of the country?

While animosity in the U.S. Congress between Republicans and Democrats has stymied just about any legislative activity at the federal level, the bipartisan vote of approval by the California legislature could influence Republicans elsewhere, Keohane said.

"I think the vote does have really significant national implications and even international implications. One is just the politics," he said. "I thought it was really noticeable and important that this was a bipartisan vote — that eight Republicans joined" in the vote to extend cap and trade, Keohane said. That opens the door to Republicans elsewhere.

To me, this is a terrific chance to demonstrate the long game theory of change.

The second key factor in passage of this legislation, Keohane added, was that California voted to use an existing tool, its cap-and-trade system, to reach new more ambitious policy goals — the plan to reduce statewide emissions to 40 percent below 1990 levels by 2030.

"To me, this is a terrific chance to demonstrate the long game theory of change. Climate change is a challenge that's urgent to face now and we also need to put policies and initiatives in place that will drive down emissions over decades," he said. "The key test is can we put policies in place that can be strengthened" to meet greater demands over time. "California just did that" in its vote.

Throwing in tax incentives for business

To wrestle up a two-thirds approval in order to protect the legislation from legal challenges, Brown and legislative leaders tossed in some incentives for businesses. They include tax breaks for equipment purchases and not putting facility-specific emissions limits on oil and gas refineries. Also, the legislation precludes local air districts from imposing additional GHG emissions regulations on facilities already under the cap-and-trade program — although localities were given authority in a separate measure to go after big polluters. Lastly, they changed how decisions will be made on cap-and-trade revenue spending to include more Republicans.

Perhaps indicative of the sway of those changes — or of how business attitudes on emissions reductions have changed — the legislation won support from the California Chamber of Commerce, which had sued to nullify the state’s cap-and-trade system four years earlier.

But business also has been reckoning with how to abide by the state's 2016 decision to further the ambitions of its climate goal of reducing GHG emissions 40 percent below 1990 levels by 2030. As PG&E's Malnight said, "The next steps are even more challenging and more important, to not only bend the curve of carbon emissions but also see significant reduction."

With nations around the world evaluating how they can bend the curve of carbon emissions downward to comply with their promises in the Paris Agreement or even just clean up the skies overhead, cap and trade is becoming a more commonly used tool.

"One of the interesting things about emissions trading and cap and trade is that it is a widespread tool that no one recognizes," Keohane said, with new countries and provinces adopting it every year in the last five or so.

Fifty countries, states or provinces and cities have systems in place or are considering them — including the 31 European Union countries, California and the RGGI states, and China. Indeed, China has seven jurisdictions using pilot cap-and-trade models.

"In the U.S., it is easy to forget this because we tried and failed to go national," Keohane said, referring to the 2010 legislation pushed by then-President Barack Obama that passed in the House but not the Senate.

Keohane was deeply involved in that effort. He laments its defeat but noted the timing coincided with when the Tea Party was emerging as a force in the U.S. politics, along with its fiercely partisan strategies.

Prior to that, Republican presidents Reagan, Nixon and George H.W. Bush all advocated for legislation to protect the environment. The Clean Air Act amendments of 1990 included language to enable cap-and-trade systems, and from that sprang the Northeastern RGGI system of trading emissions allowances among power plants.

Keohane said he can see a future U.S. administration, say in four or eight years, being receptive to a national cap-and-trade program.

"Something like this will come to the floor of the U.S. House and Senate almost certainly in the future," he said. The question is when, he said. Nonetheless, "I am absolutely confident because every day we see greater evidence of the need for action on climate, and every day we see more public support for climate policy including the emergence of voices on both sides of the aisle," he said.