Why carbon taxes aren't a silver bullet for climate change

Financial penalties for emissions shouldn't be the be-all, end-all for climate action.

Several prominent articles this year that have taken a position against energy efficiency have attracted enough press attention to require formal refutations.

But these articles all have something in common: an ideological belief that markets work best unconditionally, and therefore that a carbon pollution fee is the "first-best" economic solution to climate change.

This belief seems to drive a key common tenet of these pieces: If a carbon fee is the best solution, it follows that energy efficiency policies must be second-best, or worse. The authors are motivated to find flaws in the outcomes of efficiency programs.

This blog rebuts those premises head-on and demonstrates that far from being the first-best solution to climate pollution, carbon emissions fees alone cannot solve the climate problem.

The simple economic theory behind strong advocacy of carbon pollution fees is that if you price carbon, people will use less. But how much less will they use?

A starting point on this issue is conventional wisdom about the effect of price, which shows that it would take unthinkable increases in energy price to solve the climate problem through efficiency, despite that efficiency is widely recognized as the cheapest and largest part of the solution.

How big of a carbon fee would it take to reach an acceptable climate solution?

The consensus of climate scientists, and the basis of climate policy since 1992, has been the assessments of the Intergovernmental Panel on Climate Change (IPCC). These call for a reduction of emissions from current levels of 80 percent or more in absolute terms. This would amount to a reduction of 85 percent to 90 percent from a business-as-usual scenario.

What is a realistic estimate of the elasticity of demand? Economic studies do not yield consistent results, but an optimistically high assumption might be 0.5. This assumption is far too high to account for oil price trends since 1970, but let's assume it is valid for the moment and see what it means.

If we wanted energy demand to drop by 85 percent due to price, the math behind elasticities shows that we would require a price increase of 44 times. This is an impossibility condition: Energy prices already hover just short of 10 percent of GDP in America, so a 44-fold increase would make them go up to about half of GDP, even accounting for the fact that consumption is 85 percent less.

Suppose that we didn't insist that demand reductions do all the work, and relied instead on the same mix of efficiency and renewables and other greenhouse pollution reductions as the International Energy Agency does. (This mix understates the true efficiency potential for nine distinct reasons addressed in "Invisible Energy.") In this case, we might need only to reduce demand two- or threefold compared to business as usual.

Then we would require "only" a five-fold increase in energy price. Energy would be pushing a quarter of GDP. This might be physically possible, but it is not politically possible. Electricity at 50 cents a kilowatt hour? Gas at $12 a gallon?

This scenario would be damaging to the economy and potentially devastating to the poor. We know this because climate change deniers have used energy/economic models that only consider price effects — and ignore policies — to show that solving the climate problem would be economically burdensome.

These discouraging results are calculated under the assumption that price responsiveness is pretty high. But this is not the case, and therefore, the impacts of relying solely on pollution fees are even more troubling.

I mentioned that economic literature does not provide any self-consistency in the estimates of price elasticities. This is a problem, because if a scientist tries to measure something and two researchers get two different answers, it suggests that the thing being measured may not be well defined, or that the methods of measuring it are unreliable.

Instead, I will suggest a manner of testing the level of price elasticity for oil, which shows what an economic model based on low price elasticity would predict compared to the predictions of a model with high elasticity.

The difference is so large that you can perform this test without even the necessity of constructing a formal mathematical model. It examines the consequences of two hypotheses: one that price elasticity is high (at the same 0.5 as above) and one that it is near zero.

Doing the math on fossil fuels

Let's assume that the price elasticity of oil is about 0.5 in the long run, and .1 in the short run.

Suppose oil prices suddenly triple, as they did in 1973. The expected response in the first year is that demand goes down by 11 percent, on its way to a long-term target of 42 percent reduction.

The point here is not the numbers, but their general trend: Consumption would decline substantially at the same time that supply would increase. On the supply side, most of the increase would be subject to a time lag of three or four years or more, but on the demand side, a lot would happen immediately.

With such a large price increase, demand and supply soon would equilibrate. We would quickly close in on reductions of more than 25 percent in demand.

This relatively quick adjustment would mean that the tripling in price would be short-lived, and that the more expensive supply options would not get developed because of the rational expectation that prices would not stay that high for that long.

Price fluctuations would be relatively short-lived and relatively small, especially after the learning experience from 1974-1978 and then 1979-1985. We would not have extended periods of overinvestment in supply, leading to gluts and eventually crashes in price, nor long-lived periods of higher prices.

But what if elasticity was zero?

In this scenario, price equilibration would be entirely on the supply side. Previously unattractive sources would be developed, but due to long lead times production would not increase much for several years. Prices would stay high for a time scale of four years or longer. Lead times would in practice be even longer because some of the new resources required policy decisions before drilling was allowed.

Because demand stayed constant and lead times were long on the supply side, lots of new supply would be developed. The first projects would be immensely profitable at high oil prices.

At some point, the enhanced supply would reach and overshoot demand. It would overshoot because oil production is determined by markets with many independent competitors, and OPEC always was limited in how much it could control output.

With this imbalance, oil prices would drop. Some, or much, of the new supply would not have been economic at the new low price, but with most drilling and exploration costs sunk, it still would make sense to maintain production. So the glut would be persistent. It would last more or less the typical amount of time to deplete a new oilfield.

Low prices then would discourage new drilling and set up a new price spike. That one, in turn, would persist at least three to four years.

Consider the two hypotheses: relatively high elasticity of demand and zero elasticity. Which does a better job of predicting the oil price experience of 1970-present?

Here is what we are trying to predict/explain: 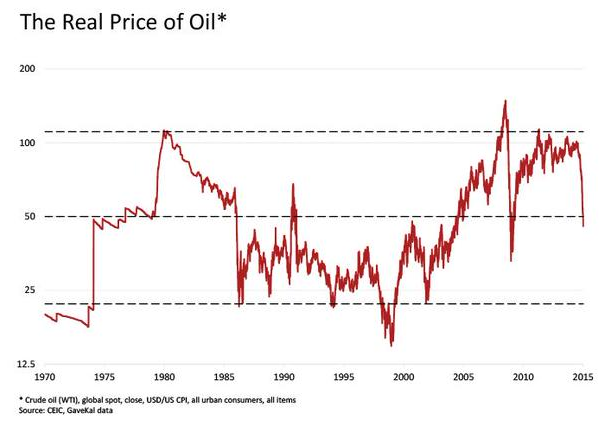 Of course, the real world is much more complicated than this. In the real world, demand reduction can occur through policies as well as price effects.

In particular, policies such as automobile fuel economy standards, or the reduction of oil generation and its replacement by gas and by efficiency and renewables, reduce demand by a lot, albeit with a pretty long lead time. Oil prices heavily are influenced by OPEC and the political relations involved in it, and the technologies for drilling also affect price.

This exercise has immense consequences for evaluating the question of carbon emissions fees as the primarily greenhouse gas reduction strategy.

One note: The analysis does not apply to implemented or proposed cap-and-trade plans, such as the one adopted by California pursuant to AB32, or the one proposed in the federal Waxman-Markey bill, both of which rely primarily on non-price energy policies.

Overall, the overwhelming bulk of emissions savings come from: improved building and equipment efficiency standards; integrated land use and transportation system planning that meets goals for travel reduction; emissions standards on fuels and vehicles; requirements for utilities to purchase and integrate renewable energy sources; regulatory reforms that encourage utilities to rely primarily on energy efficiency; and a host of other policies independent of energy prices.

The conclusion is that limiting climate change to accepted levels will require a strong reliance on energy policy measures for efficiency and renewables — policies that make markets function the way simple economic theory suggests they should, but the way the economic facts show they don't.

Charging a price for carbon is a part of the solution, but a small part. Quantitatively, where we have cap-and-trade policies in place, the market-clearing price for carbon is low. It results in energy price increases of less than 5 percent at worst, and zero or even negative at best.

The increase may be zero or less because while the emissions permit fee tends to increase retail prices modestly, the other energy policies reduce wholesale energy demand, which reduces retail prices. And even the high end of this price range is too low to have much influence on demand. Its influence on supply, while not negligible, is still not that large.

Although not its intended purpose, the permit fee has an important subsidiary role as it funds that portion of clean energy policies based on financial incentives not already provided by utilities, tax credits or other sources.

These investments in efficiency and renewable energy programs and for smarter planning in communities so that they do not require such heavy reliance on private cars are highly effective from both efficiency and equity perspectives. We are providing alternatives that are more attractive, that help the poor preferentially and that overall reduce consumer costs for energy services. This is what California is doing under AB32.

In summary, carbon pollution fees, as a stand-alone policy, are incapable of doing much to solve the climate problem. But policies to encourage clean energy are working, and careful evaluations are showing them to work pretty much as advocates such as NRDC have predicted.

Providing more funding for them, and particularly for programs such as smart growth planning that are hard to support from other sources, makes them work far better.

Pollution fees play an important supporting role in stopping climate change, but they are not the star performer. 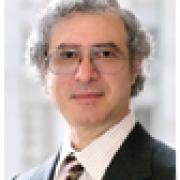 How low oil prices can be good for the environment

Now is not the time to back down from solar innovation

See all by David Goldstein