Got a sustainability framework? So does everyone else. But which one?

That’s the question we recently asked members of our GreenBiz Intelligence Panel. Specifically, we asked them to rate various sustainability frameworks in terms of credibility and importance. Three rose to the top. Work by CDP (the group formerly known as the Carbon Disclosure Project) is universally identified as the most helpful and beneficial reporting framework, followed by the Global Reporting Initiative (GRI) and the Dow Jones Sustainability Index (DJSI).

The other key finding is that while a few frameworks are broadly known and recognized, many languish, as a majority of those surveyed have not heard of them. As our panelists noted, there are a number of initiatives we didn’t list, but none got more than a casual mention.

As new frameworks start to roll out such as the International Integrated Reporting Council (IIRC) and the Sustainability Accounting Standards Board (SASB), they may face an uphill battle to gain traction unless they can prove their value in terms of providing a mix of useful tools, third party validation, and market recognition.

In late June and early July, we surveyed the GreenBiz Intelligence Panel (you can sign up to be a member here) and received 277 responses to our questions about which voluntary sustainability frameworks and initiatives are viewed as the most important, credible and favored by corporations and other organizations. 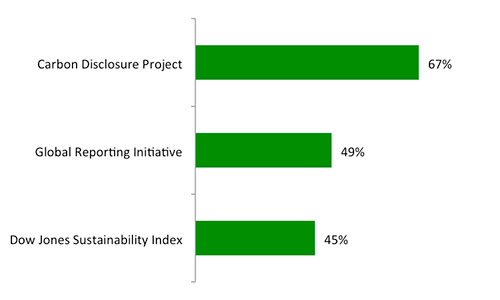 In some ways, this could be viewed as a sign of free-market forces at play as chief sustainability officers select which frameworks are beneficial to their efforts. We often talk with CSO’s about how annoying the plethora of surveys can be (such as here) and we weren’t surprised at the number of emails we received hailing the suspension of the Newsweek rankings.

However, simply responding to surveys based upon these frameworks is not where the true value lies for most CSOs. In an analysis of the comments from 86 respondents, 20 percent indicated that these surveys provided market recognition while 37 percent cited the importance of third-party validation of a company’s accomplishments. The largest number of commenters, 60 percent, declared that the major frameworks (CDP, GRI, DJSI) provide a useful tool set for influencing discussions with stakeholders and within their companies.

The Value in Standardized Frameworks

The best way to understand how CSOs view these frameworks is through their comments. As one panelist noted, “The important frameworks have the scale and public awareness to drive management attention and dedicate resources to addressing their questions and ensuring that our policies and strategies cover their focus areas.” 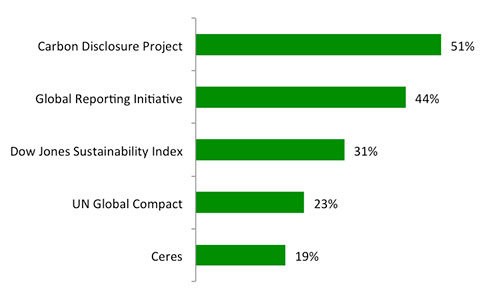 Elaborating on how these frameworks help in developing corporate programs, another panelist weighed in: “Internally, these frameworks and initiatives engender a comprehensive awareness of our environmental aspects and impacts, as well as risks and opportunities/innovations. These frameworks and initiatives also push for transparency regarding management strategies and measurable actions. They are smart about targeting areas that will have significant and meaningful impact that ultimately translate to value for our customers and stakeholders.”

The value for a company’s customers is a key point noted by several panelists. When we asked “Which of the following sustainability frameworks/initiatives has been asked about by potential customers or made a positive impact on your organization being selected as a supplier?” once again CDP (41 percent), DJSI (26 percent) and GRI (26 percent) rose to the top.

The Limits of Sustainability Frameworks

As several panelists noted, “No framework can ensure our business acts in a particular way. That's entirely up to us.” Echoing this sentiment, another panelist pointed out “None of these initiatives bring measureable value. They only provide a means of keeping score and reporting. Value comes from improved performance through innovation, technology, science and engineering. Companies can't audit and report their way to excellence.”

That is certainly true, but others see an opportunity to leverage these frameworks and surveys as a foundation for future efforts. As one panelist noted, “They offer our customers and suppliers conversation starters, and we hope they allow us to discuss and build upon other topics that enhance the value of our business relationship.”

Our survey was a conversation starter, too. Which frameworks do you like, and why?

Construction image by DeCe via Shutterstock