In 2011, word got out that Taco Bell’s beef isn’t all that it seems — it’s only about 88 percent meat. The rest? Mostly oats. This is known as a "blended meat" product: part meat; part grain. It’s a cost-cutting strategy for fast-food chains and cafeterias. The revelation put Taco Bell on the defense, and the company spent nearly $4 million on advertising to counter the narrative.

Fast-forward to the present, eight years later, and three of the largest meat producers have launched their own blended meat products and are actually touting blended meat — specifically plants — as market leverage and a value-add to the consumer.

In eight short years, leading food companies went from spending millions of dollars to persuade customers that their meat comes from animals to spending millions of dollars to launch products that are not entirely animal-based. This 180-degree turn in marketing and customer perception illuminates a paradigm shift in how we think about meat and whether it should come from an animal or a plant.

How did we get here, to the point where two of America’s largest chicken companies are flexitarian? The answer: A few startups figured out how to make plant protein cool.

Despite the rapid growth of plant-based meat, it only composes about 1 percent of the entire meat market.

For decades, a small but growing number of specialty plant-based food companies have catered to vegetarians and the health-conscious. No doubt, these companies laid the groundwork for the current boom in vegan food, but none seemed to aspire to become global multibillion-dollar brands. But then, around 2010, two of the now-largest plant-based meat companies launched: Impossible Foods and Beyond Meat. Through hip marketing and product design, and endorsements from celebrities including Serena Williams, Jay-Z, Kyrie Irving, Leonardo DiCaprio and Katy Perry, these startups differentiated themselves from the early plant-based trailblazers. They sought to make plants cooler than meat, and it’s definitely working.

Demand for the Impossible Burger is so high that some of the restaurant chains that sell it, including White Castle and Red Robin, are experiencing shortages. A leader at the Missouri Farm Bureau, an organization often hostile to plant-based meats, called it "the real deal." Beyond Meat has had the best-performing IPO in 2019, up more than 550 percent since the company went public in May. Del Taco sold 2 million Beyond Meat tacos in less than two months. In fact, the Beyond Taco outperformed the company’s signature taco.

Despite the rapid growth of plant-based meat, it only comprises about 1 percent of the entire meat market. In other words, for about every one pound of plant-based meat we eat, we eat about 100 pounds of animal meat. This 1:100 ratio has grave consequences for the environment and animals.

According to the Food and Agriculture Organization of the United Nations, greenhouse gas emissions from raising farmed animals make up about 15 percent of global human-induced emissions. And the vast majority of animals raised and killed for food suffer miserably inside dark, unsanitary factory farms. For example, chickens raised for meat have been bred to grow so large so fast that many of them cannot even walk without pain.

If we’re to have any hope of constructing a compassionate and sustainable plant-based food system, we can’t depend solely on startups to create it. We need the incumbents — the Perdue Farms of the world — on board too. Thankfully, they recognize consumer attitudes are shifting and want to meet the demand. Although they haven’t yet taken the big leap toward fully plant-based products, blended meat is a positive step because it measurably reduces the number of chickens raised and slaughtered. Fewer chickens also mean less pressure on our environment. And given what we are up against, that can’t come too soon. Some might see blended meat products as half measures or even a co-optation of the plant-based movement, but I see it as progress.

Don’t get me wrong — blended meat won’t save the world. We need to dramatically cut meat production to reduce greenhouse gas emissions, and a single animal stuck in a factory farm is one too many. And there are other ways blended meat could fall short. What if consumers purchase blended meat instead of plant-based meat? While I think it’s unlikely, it’s a possibility. Despite the potential pitfalls, Perdue Farms alone raises and slaughters 700 million chickens each year, so if their blended meat products take off, or if they begin to offer completely plant-based products, the number of animals in factory farms could significantly decrease.

The meat giants dipping their toes into plant protein are taking the "if you can’t beat ’em, join ’em" approach, a sign that we are headed in the right direction. Anyone who dreams of a future where animals are protected and our planet breathes a little easier should embrace this change. 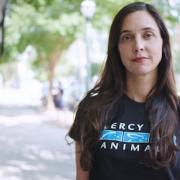